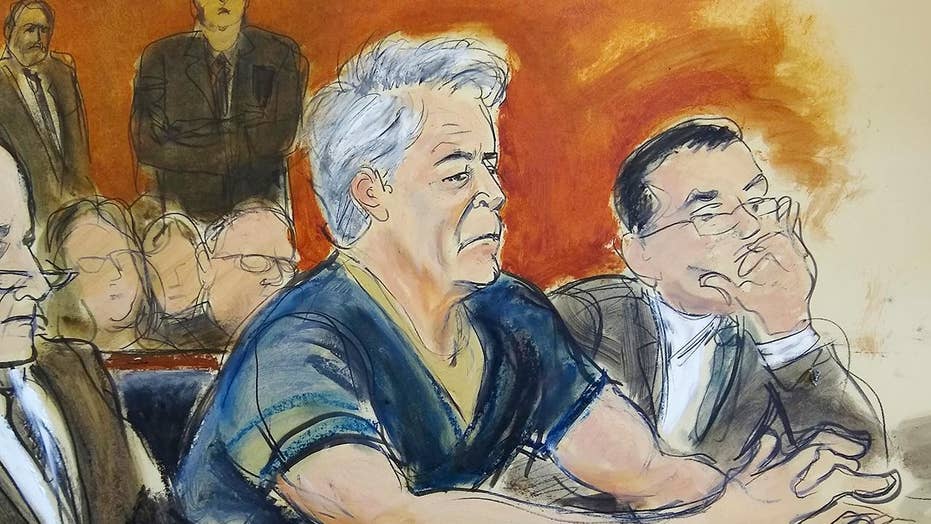 Jeffrey Epstein's attorney argues his client should be free on bail

In return, the wealthy financier will offer up his private jet and $77 million New York City mansion as collateral; Bryan Llenas reports.

Registered sex offender and well-connected financier Jeffrey Epstein maintained a safe with a bizarre, expired passport in a different name, "dozens of diamonds" and "piles of cash" at his multi-story Upper East Side mansion, New York prosecutors revealed during a lengthy Monday bail hearing.

U.S. District Judge Richard Berman said he needed more time to make a decision about whether the wealthy 66-year-old should be denied bail while awaiting trial on new charges he recruited and abused dozens of underage girls in New York and Florida in the early 2000s.

Federal prosecutors say Epstein is a flight risk and a danger to the community, revealing new details in court during the 2-hour hearing about the financier's assets, including the intriguing contents that had been locked inside one Epstein's safe.

Assistant U.S. Attorney Alex Rossmiller said prosecutors "became aware today" of an outdated passport issued by a foreign country with a photo that appears to be Epstein but in a different name. The puzzling passport, issued in the 1980s, places the subject's residence as being in Saudi Arabia.

In addition to the passport, authorities also discovered diamonds and cash in the safe, uncovered during the raid of Epstein's Manhattan mansion following his July 6 arrest.

Epstein's safe was also where hundreds of photos "of what appeared to be underage girls" were discovered after his arrest, according to prosecutors. In addition to the disclosure of what was in the safe, prosecutors said their case is getting "stronger by the day" after several more women contacted them in recent days to say he abused them when they were underage.

“The defendant’s financial disclosure should alarm the court," Rossmiller said, telling the court "we're just relying on the defendant's word for all of this."

Rossmiller pointed to questions about, for instance, how much of Epstein's finances may be in diamonds or art. Berman, too, complained about the "absence of detail" in Epstein's disclosure, which he said was "less than a page long."

In a written submission to Berman on Friday, prosecutors shared new information about their investigation and why they perceive Epstein to still be a danger.

They said several additional women in multiple jurisdictions had identified themselves to the government, claiming Epstein abused them when they were minors. Also, dozens of individuals have called the government to report information about Epstein and the charges he faces, prosecutors said.

Prosecutors said they believe Epstein might have tried to influence witnesses after discovering that he had paid a total of $350,000 to two individuals, including a former employee, in the last year. That came after the Miami Herald reported the circumstances of his state court conviction in 2008, which led to a 13-month jail term and a deal to avoid federal prosecution.

"This course of action, and in particular its timing, suggests the defendant was attempting to further influence co-conspirators who might provide information against him in light of the recently re-emerging allegations," prosecutors said.

Epstein was arrested July 6 at Teterboro Airport in New Jersey as he arrived on a flight from Paris. He has pleaded not guilty to the new charges against him.

Epstein's attorneys have said the charges will not stick because Epstein is protected by the terms of the 2008 plea agreement. Under the terms of that deal, Epstein served 13 months in jail, was required to reach financial settlements with dozens of his alleged victims and registered as a sex offender.

In their argument for bail, Epstein's lawyers argued in favor of house arrest with electronic monitoring at his $77 million Manhattan mansion, where prosecutors say some of the sexual activity took place.

The defense also argued their client had long lived with the fear federal prosecutors might pursue sexual abuse charges against him again, but had never sought to flee the country.