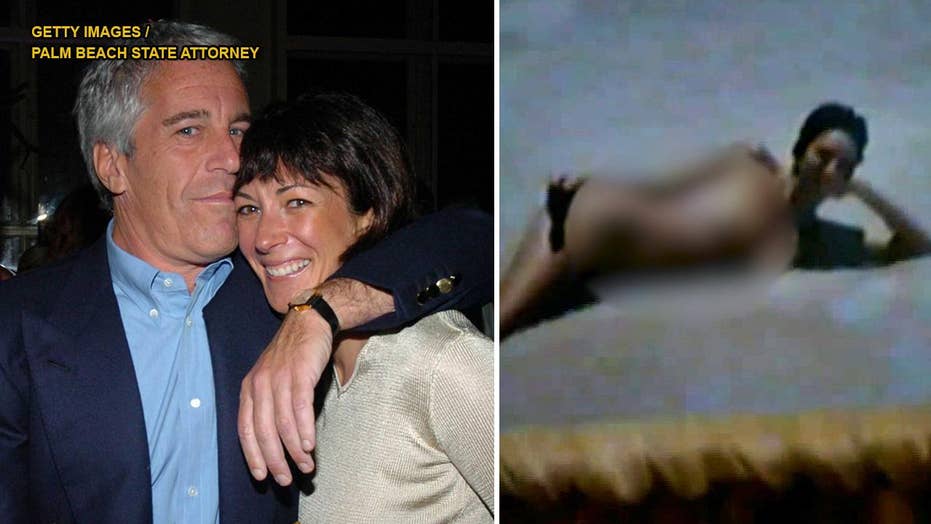 Several photographs, some of which include nudity, and a sketch appearing to show convicted sex offender Jeffrey Epstein's then-girlfriend Ghislaine Maxwell were among the items seen in a video from a 2005 police raid of his Palm Beach mansion.

Video from a 2005 police raid at convicted sex offender Jeffrey Epstein's Florida mansion shows several photos -- at least one of them explicit -- and a sketch that appears to depict the financier’s girlfriend at the time, Ghislaine Maxwell.

One photograph seen in Epstein's Palm Beach home appears to show his girlfriend and alleged madam topless on a beach. The video also showed his house was partially decorated with explicit photos and imagery of young women, Fox News reported Thursday.

Maxwell, 57, allegedly recruited girls to sate Epstein's sexual appetites, according to lawsuits filed by accusers of the financier, who last month killed himself while in jail awaiting trial on sex trafficking charges. Court documents allege Maxwell, who is the daughter of the late, disgraced publishing tycoon Robert Maxwell, also participated in threesomes with Epstein and young girls.

She reportedly also acted as the alleged sex trafficker's social planner and household organizer in New York and Florida at times.

Juan Alessi, who managed Epstein’s home in Palm Beach for years, said in a deposition that Maxwell “would tell me, I am going to take care of the house,” adding later that he drove Maxwell to spas around South Florida to look for young women who could do “massages” for Epstein — their code for sexual acts.

About two weeks ago, one of Epstein’s alleged victims, Jennifer Araoz, sued Maxwell and three other unidentified female staff members for allegedly conspiring to allow her to be raped, according to the lawsuit obtained by Fox News.

Araoz alleged in an op-ed for The New York Times that Maxwell and the other defendants helped Epstein lure her to his mansion when she was a 15-year-old high school freshman under the guise that he would help her career and family. Epstein allegedly raped her when she refused to have sex with him.

Araoz was first to file a lawsuit after New York’s Child Victims Act went into effect earlier this month. The new law removed a statute of limitations and permits victims to sue alleged perpetrators of childhood sex assaults through age 55.

Another accuser, Virginia Giuffre, said in a lawsuit that when she was 15 she was working at the Mar-a-Lago club, owned by Donald Trump, when she was approached by Maxwell about a way to earn money: Learn massage therapy and get to know Epstein as a man who could give her a bright future.

In a sworn affidavit, Giuffre said she was flown on Epstein’s private planes to his properties in New Mexico, the U.S. Virgin Islands, Paris and New York. Guiffre also said Maxwell arranged meetings for sex in London and elsewhere with Britain’s Prince Andrew.

Andrew has said the charges are false and Buckingham Palace has denied any wrongdoing by the prince. There is a photo in court records showing Prince Andrew with his arm around Giuffre’s waist with Maxwell smiling in the background.

“Ghislaine Maxwell was heavily involved in the illegal sex. I understood her to be a very powerful person,” Guiffre said in the affidavit. “She used Epstein’s money and he used her name and connections to gain power and prestige.”

Maxwell has vehemently denied Guiffre’s claims and the others in court documents, saying in a 2011 press release, “The allegations made against me are abhorrent and entirely untrue and I ask that they stop.”

Maxwell has said nothing publicly since Epstein’s death, and could not be reached for comment, according to The Associated Press.

The elusive former associate of Epstein has not been charged with any crime. However, federal prosecutors confirmed this week that inquiries into Epstein’s co-conspirators were ongoing and would continue despite the fact that the criminal case against Epstein has been dismissed now that he's dead.

Epstein was accused of molesting dozens of underage girls at the Palm Beach mansion and by 2006, investigators had interviewed more than 30 young women – some of whom were minors at the time of the alleged molestations.

As for Maxwell, the socialite’s whereabouts are a subject of some conjecture, with news reports saying she had lived in Britain and Paris. Earlier this month Maxwell was photographed in a fast-food restaurant in Los Angeles, the New York Post reported, adding that she had not been photographed in public since 2016.