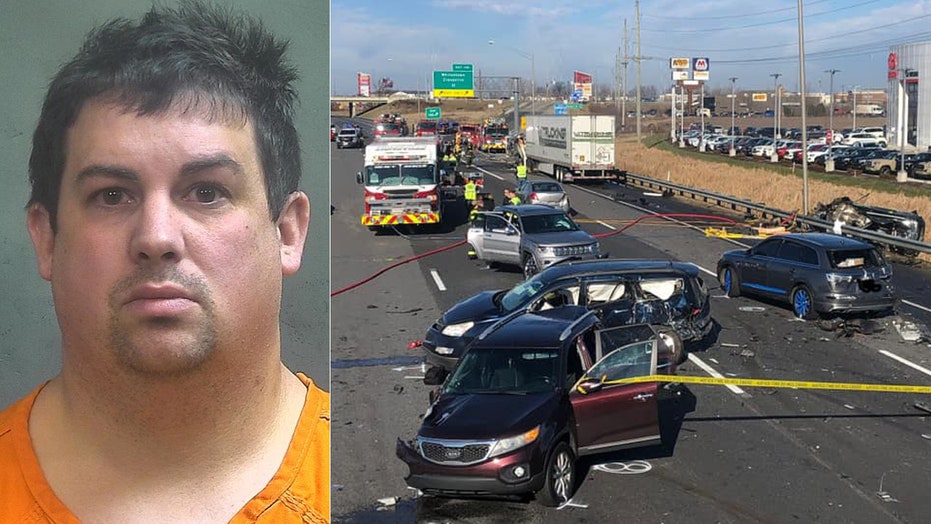 A trucker in Indiana crashed into eight cars leaving three dead and 14 injured. The 34-year-old driver says he was just setting down his coffee mug before his 18-wheeler plowed into slowing traffic.

Three people were killed and over a dozen taken to area hospitals after a semi-truck plowed into slowing traffic on an interstate in Indiana on Sunday after the rig's driver glanced down to set his coffee mug down, according to officials.

The Boone County Sheriff's Office said the crash happened shortly after 11 a.m. on the northbound lanes of Interstate 65 in Whitestown, located northwest of Indianapolis. Officials said the "major" crash involved the semi-truck and eight other vehicles.

“A sad day for two Boone County families. The loss of two young women and a one-year-old child," Boone County Sheriff Mike Nielsen said in a statement. "Distracted driving or driver inattention is a major cause of many accidents on our public roadways. In this case, we believe it was a contributing factor in this fatal crash."

Officials said the semi-truck driver, 34-year-old Mathew Lewis Small of Grandville, Mich., told authorities he was headed northbound on I-65 and "looked to set his coffee mug down" when he ran into slowing traffic.

The crash happened on the northbound lanes of Interstate 65 around 11 a.m. on Sunday. (Zionsville Fire Department)

"It appears Mr. Small collided with all 8 vehicles as he plowed through the back-up," the sheriff's office said.

Witnesses told first responders that a fire started after the crash when a vehicle was pinned up against the guardrail by the semi-truck. Three people inside the vehicle that caught fire were pronounced dead at the scene. They were identified as 21-year-old Mariah Tomey, 1-year-old Hadley Tomey, and 19-year-old Kaylee Kirk, all of Lebanon, Ind.

Another vehicle was pushed over the guardrail and flipped onto its driver's side. Two people inside that vehicle had to be extracted.

The sheriff's office said a total of 13 patients were transported to St. Vincent’s Hospital and another was taken to Riley Children's Hospital. None of their injuries appear to be life-threatening.

Officials said that six additional vehicles sustained serious damage in the crash, which blocked all northbound lanes of the highway. The interstate was closed for about four hours as a result of the investigation, FOX59 reported.

After the investigation, Small was charged with three counts of reckless homicide and booked into the Boone County Jail.

"The Boone County Sheriff’s Office feels strongly that those that cause death on our public roadways, because of driver inattention, should be held accountable," Nielsen said in a statement. "Please pay attention to your driving when operating a motor vehicle. Give yourself plenty of room to have a way out, put down your phone or other objects, DO NOT drive distracted or impaired! Keep these families in your thoughts and prayers."