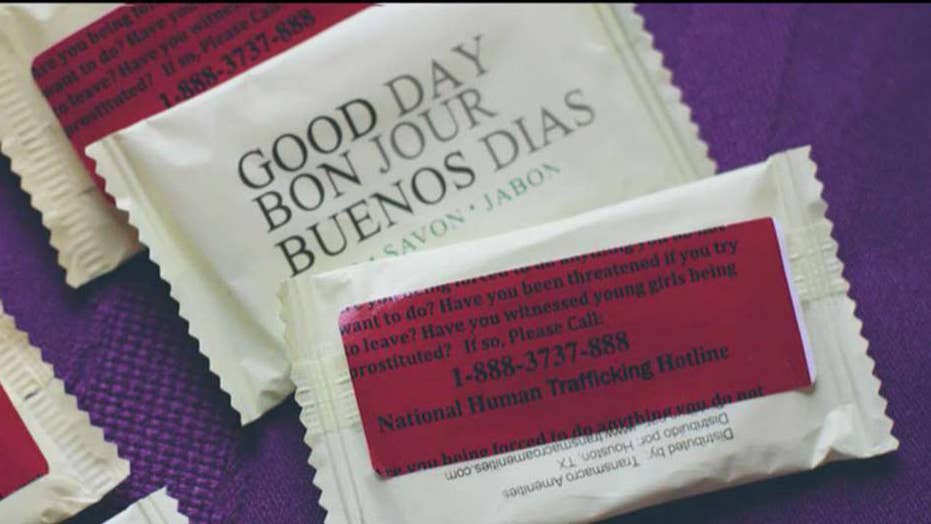 'Fox Report' takes you inside the activist movement to fight human trafficking.

Human trafficking is an issue so complex and wide-ranging that law enforcement alone isn’t enough. The police can’t be everywhere, and as a result, advocates have emerged in an effort to fill in the gaps.

Even government agencies as vast and well funded as the FBI come up short in their efforts to address every aspect of crime prevention and victim rehabilitation. Case in point: The vast network of advocacy groups relied upon by the FBI to help meet the hierarchy of needs for human trafficking survivors.

Kathryn Turman, the assistant director in charge of the FBI's Victim Services Division.

“I think that if you do this work for very long, as many of us have, you realize that no one agency can do it all, particularly with these kids, these victims, because their needs are so varied and complex,” Kathryn Turman, the assistant director in charge of the FBI’s victim services division. “The NGOs (nongovernmental organizations) play a wonderful role because they can raise money, they can provide long-term services.”

Turman was tapped to create the FBI’s Victim Services Division in the wake of the Sept. 11, 2001, terrorist attacks. In the nearly 18 years since, she’s expanded the division to include about 300 victim specialists spread out across the country. Typically, she said, they work with victims through the duration of their cases. They’re the first point of contact for victims of crimes – not the least of which are survivors of human trafficking.

When it comes to survivors of trafficking, Turman said her specialists work to answer the most immediate needs of recovered victims. Sometimes that means buying them clean clothes or replacing a medication.

“The victim specialists really have to work with their local partners, with NGOs, with local police, with child protective services, sometimes with the Juvenile and Family Services divisions,” she said. “Because it really does take more than just our victim specialists to be able to address the rather comprehensive needs of these kids; many of them may have no safe place or welcome place to go back to.”

"Right below my mirror, standing in a torrential downpour, shivering, was about a 15 or 16-year-old girl. I rolled down my window and I screamed out ‘What?’"

The problem has attracted swarms of advocates and activists dedicated to education, prevention and post-trafficking care for survivors.

“I see myself as part of a mobile army, and we travel our nation’s highways and byways and we work in conjunction with law enforcement,” Gary Smith, an ambassador with TAT said. “There’s a lot more of us daily out on these roads than there is law enforcement.”

Gary Smith, an ambassador with Truckers Against Trafficking, speaks to Fox News.

Smith, a bespectacled middle-aged man who drives trucks regionally in Ohio and the surrounding states, helps lead education events and speaks publically about TAT’s efforts and his own experiences with trafficking.

“I made a mistake ten years ago and I failed to act,” Smith said, recounting a time as a new driver when a woman being trafficked at a truck stop propositioned him late at night. “… Right below my mirror, standing in a torrential downpour, shivering, was about a 15 or 16-year-old girl. I rolled down my window and I screamed out ‘What?’. She said, ‘Do you want some company?’, and I screamed back at her, ‘I’m not lonely. Go away.’”

He said it’s an experience that he won’t soon forget, and the catalyst for his activism against human trafficking.

Theresa Flores is a sex trafficking survivor who founded the group Save Our Adolescents from Prostitution (S.O.A.P.). Her organization functions in several states and puts on outreach programs during large events, like Super Bowls and political conferences, which often attract traffickers.

The bars of soap passed out to motels in high-trafficking areas by Theresa Flores and her advocacy group, S.O.A.P.

Additionally, S.O.A.P. partners “with local organizations to distribute millions of bars of soap wrapped with a red band that gives the National Human Trafficking Hotline number … and resources to high-risk motels,” according to the organization’s website.

“The subproject is a part of many different coalitions and collaboratives,” Flores said. “We’ll go into a city in a state that we’ve never been to, but we have to partner with others that are local. That’s what we want to do because when we leave, we want them to continue on the efforts. It’s not just a one-time shot.”

Theresa Flores, the founder of Save Our Adolescents from Prostitution.

Another organizer who has devoted her professional life to fighting trafficking is Andrea Powell. She’s been working with victims of trafficking since 2003, when she founded FAIR Girls, an international anti-trafficking organization. More recently, she started Karana Rising, a Washington D.C.-area nonprofit dedicated to helping survivors of trafficking heal and find meaningful education and employment.

READ MORE: How teens get trapped in a vicious cycle of human trafficking

“We focus on providing young people who were at risk or have experienced trafficking with job skills, life skills and a connection to the community to help them either overcome or stay safe from situations of trafficking,” Powell said of Karana Rising.

“They’re not looking at trafficking as this isolated, horrible incident. It’s just the next bad thing that’s happened. It’s like that bad icing on the bad cake."

The problems associated with trafficking are myriad for survivors, she said. The vast majority of women she’s worked with were sexually abused before being trafficked, adding to the trauma and stigma they’re faced with when, and if, they escape the vicious cycle.

“They’re not looking at trafficking as this isolated, horrible incident. It’s just the next bad thing that’s happened,” Powell said. “It’s like that bad icing on the bad cake. So, when they’re out of that situation, all those other root causes and traumas are still present and are now just compounded with the abuse, the potential STDs, unwanted pregnancies, stigma they face as survivors of sex trafficking.”

Powell said it’s this confluence of abuses, issues and stigmas that she works to overcome with the survivors at Karana Rising.

“All of that combined means that when a young person is out there trying to get a job, trying to get by, those traumas come back and it makes it much harder to thrive,” she said. “Coupled with the fact that most of these young people come out and they have nowhere to live, they don’t know who they can trust, and so traffickers prey upon that. That’s why we need that social support at Karana Rising and other agencies to keep them safe.”