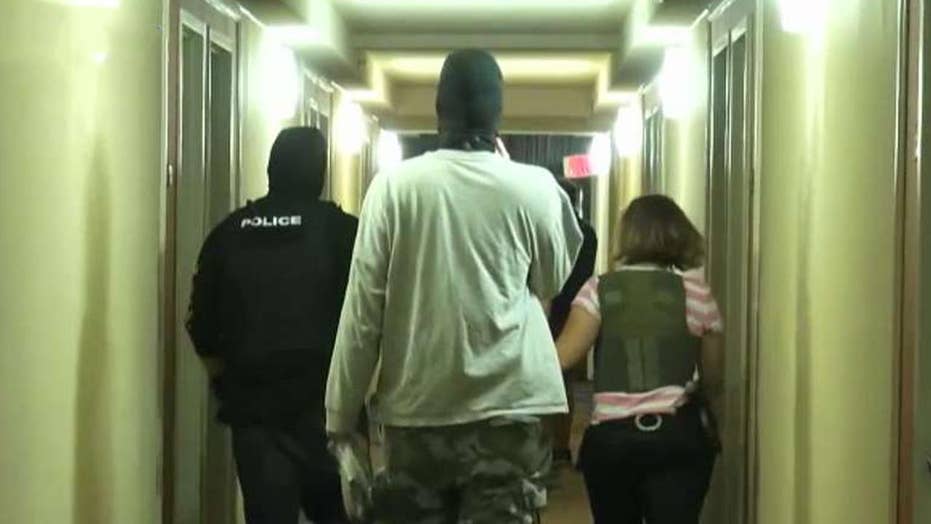 'Fox Report' takes and exclusive look inside a Florida home helping boys who were exploited by human traffickers.

If there’s a public face to human trafficking it’s usually that of a young teenage girl, but across the country a new type of victim is increasingly coming to the fore.

More and more, young boys are being preyed upon and exploited in the sex trade, and advocates are beginning to take notice.

Geoff Rogers and Kevin Malone at their Florida-based home for boys who have been sex trafficked. (Fox News)

“When you think about the magnitude of the problem, the number of kids being sold for sex here in America, most people think of girls,” Geoff Rogers, co-founder of the United State Institute against Human Trafficking (USIAHT), said in an interview with Fox News, “and certainly there's a tremendous number of girls being sold. But if we look at one particular study funded by the Department of Justice … that study identified an estimated 36 percent of kids that are trafficked are boys.”

While attention is focused on female victims and survivors, most of the public is unaware that boys, some as young as 10, are forced into the dark world of trafficking. Making matter worse, services to help these young men escape a life of trafficking are virtually nonexistent.

“As we traveled the country, we couldn't find really any services for boys,” Rogers says.

"I realized at the Super Bowl that these traffickers were selling boys, and sometimes dressing them up as little girls, that it kind of opened my eyes to the problem."

Along with USIAHT co-founder Kevin Malone, Rogers set out to help the young male survivors of trafficking.

“I noticed when I went to the Super Bowl in Phoenix a few years ago, that there were ... boys being trafficked there,” Malone, who is also a former general manager for the Los Angeles Dodgers, tells Fox News. “What we found, even there, were little boys dressed up as girls and being sold.”

“So I think that was the first time I realized, apart from when I was in Thailand and met a 5-year-old boy that had been trafficked, but in America when I realized at the Super Bowl that these traffickers were selling boys, and sometimes dressing them up as little girls, it kind of opened my eyes to the problem," Malone said.

Exact numbers and the full scope of male victimization are not known. But according to a 2016 study commissioned by the U.S. Department of Justice, up to 36 percent of children forced into the U.S. sex industry were male. A 2008 study by John Jay College of Criminal Justice suggests that boys made up nearly half of children who were sexually exploited in New York City.

"Every child and the experiences that they've had is very, very different, especially when it comes to the boys."

Both Malone and Rogers, through their organization, set out to help these faceless kids, and in 2017 they opened the first safe home for young male trafficking victims.

“This safe home is for young boys that have been sex trafficked. They're from the ages of 10 to 17. And it's been an incredible process to work with these young kids, to really learn first-hand the differences between how boys are trafficked compared to girls,” Rogers said. “Because they've really -- they've never seen a program like this before. Every child and the experiences that they've had is very, very different, especially when it comes to the boys.”

Kevin Malone at his Florida-based home for boys who have been sex trafficked.

Fox News was given unprecedented access to the boys’ home. Opened in 2017 by USIAHT in a remote location of Florida, it's thought to be the first of its kind in the nation.

The facility can house up to six young male survivors at any given time.

“Over the last two years, we've worked with boys 15, 16, 17 years old. That's been predominantly who we worked with, up until several weeks ago, when we got the first phone call about a 10-year-old boy,” Rogers said. “And so I'll tell you, from our staff standpoint, I mean, we've been working' with these boys now for two years, but when we got the phone call with the 10-year-old, it was almost like a collective 'hold your breath.'”

Rogers said each boy’s story puts a spotlight on what is needed to combat this growing situation.

“What we recognize is that's really on what we'd call the back end of the problem. And so it's the rescue, the rehabilitation of these victims,” he said.

"So I believe the biggest problem we have is the lack of empathy, and a lack of compassion, and a lack of concern by Americans who really are generally the most loving, and concerning, and giving, and helpful people in the world."

Many of the residents of the USIAHT’s safe home were coerced into a life of sexual slavery before they were able to leave that existence behind.

•    “Alex” was 13 when he ran away from foster care.  At a bus station, he met a man who offered to let Alex live with him in exchange for sex.  Eventually, the man forced Alex to begin having sex with other men to keep his room in the home.  Alex believed that he had no choice and did not want to go back to foster care, so he complied, fearing that he would have no place live or have meals to eat if he said no.

Alex was discovered and rescued by an undercover police officer after Alex's picture went up on an escort site.

•    “Ryan” was a teenager when his mom first sold him for sex with an older man.  Eventually, his mom convinced several of Ryan's friends to sell themselves as well.  Although she paid them a small amount, she kept most of the profits for herself.  Eventually, the sex trafficking ring was discovered by the authorities and Ryan was placed in foster care.

•    “Jonah” was kicked out of his home when he told his parents he was gay.  He was living on the street when two men offered him a room in their house.  It wasn't long before he learned that this generosity was a ploy.  He was only allowed to stay if he had sex with them and their friends.

“There are no throwaway kids,” Malone said. "Even though 50 to 60 percent are coming out of foster care, those are our kids. We're a community. We're a nation. We need to protect our kids.”

Shoes of the boys who are staying at the Florida-based home.

“So I believe the biggest problem we have is the lack of empathy, and a lack of compassion, and a lack of concern by Americans who really are generally the most loving, and concerning, and giving, and helpful people in the world,” Malone said.

The USIAHT’s safe home is staffed with care workers around the clock to provide service to up to six residents at any given time. They assist with counseling and helping these young men adjust to a normal life.

“And so with these boys, most of them, really all of them now, are going to public school. Some of them now have cellphones that they can check in and check out,” Rogers said. “Some of 'em have some social media access. They're on Xbox. They're on the Internet. It's all monitored, of course.

“But what we're really doing is trying to give them the most normal environment possible," Rogers continued. "Because really it's a recognition that these are just kids. They're just teenagers.”