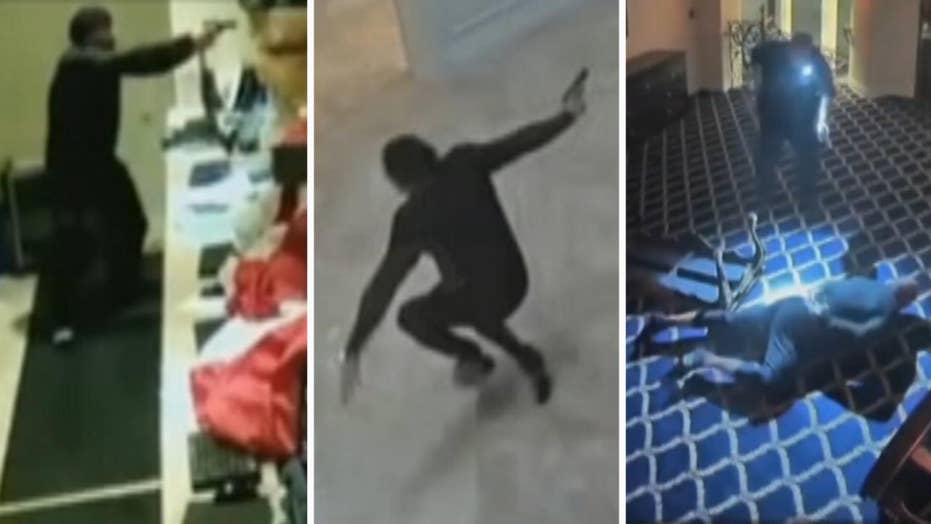 New video released from shootout at Trump hotel in Miami

Security cameras capture confrontation between armed gunman and police at the Trump National Doral Miami hotel in May 2018.

Prosecutors released video of the man accused of exchanging gunfire with police at the Trump National Doral Golf Club in May.

The footage, which was released by the Miami-Dade State Attorney’s Office on Wednesday, appeared to show the suspect, Jonathan Oddi, 42, who was dressed in all black, walking into the lobby with a gun as employees scatter. The gunman is then seen unfurling a large American flag over the counter of the golf resort’s lobby. The gunman is also seen shooting at the ceiling.

Later in the video, the suspect raises his arms as cop car lights are seen outside the glass doors. The man ducks behind the lobby counter before grabbing a gun and shooting. He then flees the area and runs to a different room. An officer is seen chasing him on foot. The Miami Herald reported Oddi was shot in the leg before he was arrested.

Miami-Dade Police said Oddi was “yelling and spewing some information about President Trump” at the time of the incident.

Oddi is slated to appear in court for a routine hearing Thursday. His attorneys claimed he “suffered a mental breakdown and is extremely sorry.” He is currently behind bars as he awaits trial.

Oddi, who listed himself as a fitness instructor and manager at Pegasus, also once worked as a stripper for Dancing Bear as a side job about five years ago, the Miami Herald reported.

Oddi was a native of South Africa and became an American citizen in 2017, according to a photo posted to his Instagram in August 2017. He resided in Doral, Fla.