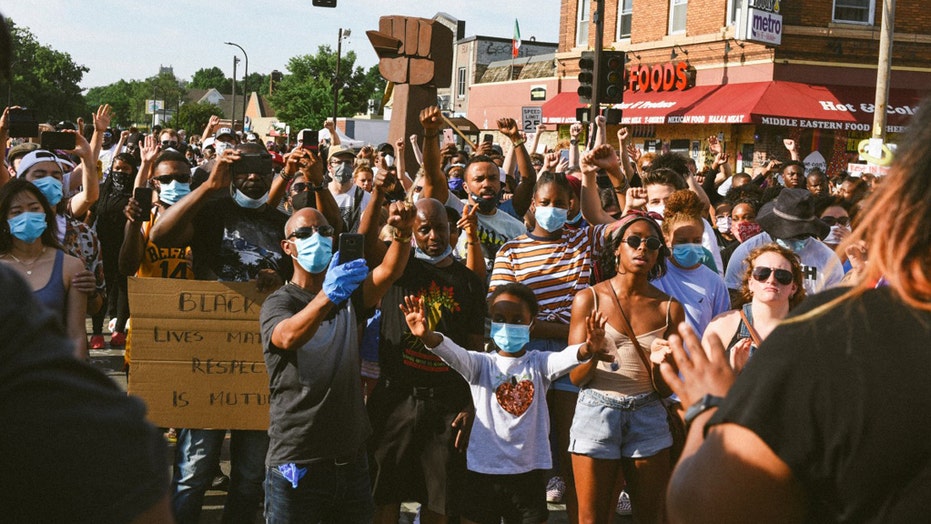 Tears are shed and lives are changed at the street corner where George Floyd died while in the custody of police officers in Minneapolis on Memorial Day.

A group of ministries -- Youth With a Mission (YWAM); Circuit Riders, a California-based missions movement; and Worldwide Outreach for Christ, a local church -- have been holding daily services at the epicenter that sparked protests around the world.

GEORGIA STATE TROOPER TELLS PROTESTERS IN VIRAL VIDEO: 'I ONLY KNEEL FOR ... GOD'

Christophe Ulysse of YWAM Kona, Hawaii speaks at a service at the site of the George Floyd memorial in Minneapolis, Minn. (David Parks)

"We're going from pain and hatred to healing and hope," Ulysse, a black Canadian Christian leader, said. "There's this new narrative of the gospel."

One man who was hopeless overdosed on drugs, left without a pulse, and the next day he found a purpose to his life at the service, Ulysse said. A 19-year-old man got his life call as a minister. He signed up to go to Bible school and share the message that radically changed his life. Others have been baptized.

A person is baptized at the site where George Floyd was killed on Memorial Day at the hands of police officers. Several groups are holding daily services at that location offering hope and healing. (David Parks)

“We need to show that we can affect positive change," Ulysse said. "You have a voice and you can go to the nations. You can carry this on. We’re empowering them to be carriers of hope."

Pastor Curtis Farrar, whose church has been on the corner of 38th and Chicago for 38 years, has preached and had members of his congregation lead worship and prayer at the memorial site.

Yasmin Pierce of Circuit Riders participating in a worship and prayer service at the site of George Floyd's memorial in Minneapolis, Minn. (David Parks)

Jonathan Tremaine "JT" Thomas, a pastor from Ferguson, Mo., and founder of Civil Righteousness, brought a model of sharing personal stories of hope and healing, a message, and a time for worship and prayer for healing in the city that has seen protests turn to looting and rioting.

"I came here and I was broken," Ulysse explained. "It affects team members differently, but those of us of color, as we're here, we're watching the change happen through the gospel. My heart is so filled with hope. Those in the neighborhood are saying this is unprecedented unity. They're feeling an outpouring of love and hope from this nation."

People worship and watch during a service at the Memorial site for George Floyd in Minneapolis, Minn. (David Parks)

"For us, there is this deep conviction that we have tried everything to deal w/ this issue. We've tried politics, we've tried economics, and we've tried social reform," Ulysse, who recalls the Rodney King riots as a kid, said. "It's the same thing over and over. We have to go back to what actually works."

People listen at a service at the memorial location for George Floyd in Minneapolis, Minn. (David Parks)

Ulysse calls it a "historic moment."

"The pain went to the nation and now the globe," he concluded, "but we believe that healing is now going out from the intersection to the nations and the globe."