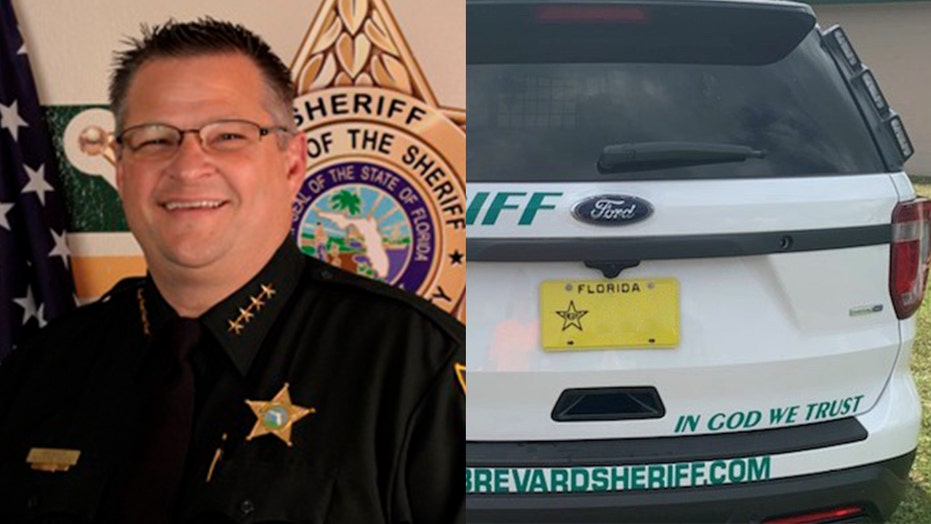 An atheist group has complained about new decals on a Florida county's patrol cars that feature an American flag and the phrase "In God We Trust."

The Freedom From Religion Foundation (FFRF) argues the new "patriotic" decal, suggested by a local military veteran, is "frightening and politically dubious" in a letter to the Brevard County Sheriff's Office, but Sheriff Wayne Ivey isn't backing down.

”They have a better chance of me waking up thin tomorrow morning than they do of me taking that motto off our cars!" Ivey told Fox News. “I personally believe that our country is at a tipping point, and if we, as strong patriotic Americans, don’t stand for the principals of our great nation, we are going to lose the America we all know and love!"

“I can assure you that the proud men and women of our agency are forever unwavering in our support of the constitution and the principles of our amazing country,” the sheriff added.

Annie Laurie Gaylor, co-president of FFRF, said the new decals were "inappropriate and exclusionary," calling the national and Sunshine State motto "controversial" in a statement.

“Spending taxpayer time placing religious messages on patrol cars is beyond the scope of secular government,” Gaylor wrote. “Further, in a time when citizens nationwide are increasingly distrustful of law enforcement officers’ actions, it is frightening and politically dubious for the local police department to announce to citizens that officers rely on the judgment of a deity rather than on the judgment of the law.”

To "protect the conscience of all citizens," FFRF is asking the sheriff's department to remove "In God We Trust" from all office property, not just the vehicles.

“Law enforcement officers take an oath to protect and serve all citizens,” David Williamson, director of Central Florida Freethought Community, FFRF's chapter in Florida, added. “Displaying a preference for religion so clearly right on county property is a betrayal of that oath.”

The FFRF and Williamson successfully defended the act of atheists giving invocations before county commissioner meetings in Brevard County. However, First Liberty Institute argues that not only is FFRF wrong here, but the group has "no basis in law, nor tradition."

With the backing of the Supreme Court, First Liberty counsel, Keisha Russell, told Ivey to reject FFRF's request, adding the motto "should be honored and celebrated as an expression of what it means to be American."

“It is absurd to think that a Florida sheriff would be acting ‘inappropriately’ for posting the official mottos of both the United States and the State of Florida," Jeremy Dys, First Liberty special counsel for litigation and communications, told Fox News. "This attempt to scold a public servant for acknowledging one of the most cherished traditions of our country is shameful.”