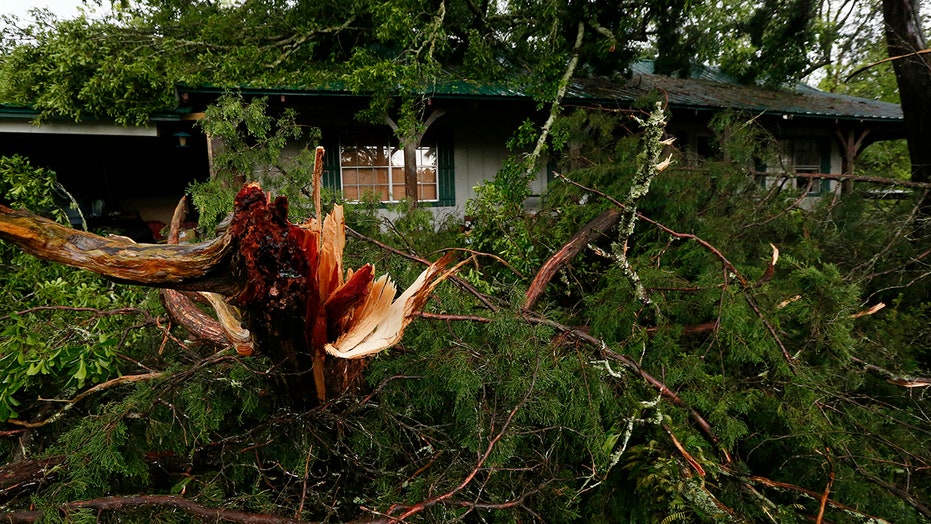 Strong storms that barreled across the South overnight Thursday claimed the life of an 8-year-old girl in northern Florida after a tree fell on her house, raising the death toll to 4.

The Leon County Sheriff’s Office said deputies received a call just after 8 a.m. Friday to report that a tree had gone through the house on Old Woodville Highway and had injured two residents.

Two children - an 8-year-old girl and a 12-year-old boy - were transported to a local hospital with injuries. The girl was pronounced dead at the hospital.

The sheriff’s office said the 12-year-old boy had injuries that were not life-threatening and was with his families.

“Our thoughts and prayers are with the family during this time,” the sheriff’s office said on Twitter.

The child was not immediately identified.

The strong storms that roared through Thursday night and into Friday morning killed two Mississippi drivers and a woman in Alabama. It left more than 100,000 people without power across the region.

Fallen trees line the roads leading into the small community of Learned, Miss., Thursday, April 18, 2019. Several homes were damaged by fallen trees in the tree-lined community. Strong storms again roared across the South on Thursday, topping trees and leaving more than 100,000 people without power across Mississippi, Louisiana and Texas.  (AP)

Alabama authorities said a woman was killed Thursday night after strong storms knocked a tree onto her mobile home in St Clair County.

Torrential downpours, large hail and a few tornadoes are among the hazards, the National Weather Service in Raleigh, North Carolina, warned about in its Friday morning hazardous weather outlook.

"An isolated strong and long-track tornado can't be ruled out," forecasters wrote.

Multiple tornado warnings were issued to parts of northeast Georgia on Friday, however, there were no immediate reports of any damage from those storms.

National Weather Service forecasters said they believe multiple tornadoes hit southwest and central Mississippi on Thursday, although they won't be sure until the damage is surveyed. Heavy winds also were reported in Louisiana earlier in the day and in central Alabama as the system quickly pushed eastward.

Sonya Banes looks at damage caused by a large oak tree that crashed through the ceiling of her mother's house in Learned, Miss., Thursday, April 18, 2019.  (AP)

Damage was heavy in the Mississippi hamlet of Learned, about 20 miles (32 kilometers) southwest of Jackson. Large oaks were uprooted from the saturated ground, landing on at least a dozen houses.

The National Weather Service received numerous reports of hail pelting the storm-struck areas. Egg-size hail was reported about 60 miles northwest of Fort Worth.

The threat came days after more than 40 tornadoes from East Texas to Georgia left at least nine dead. That outbreak damaged more than 250 homes, businesses and public buildings across Mississippi.