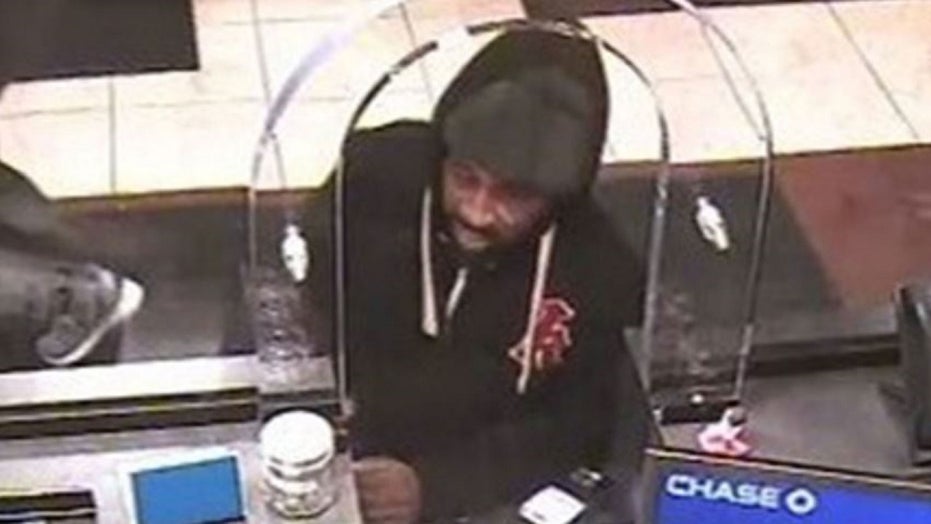 A man accused of robbing two banks shortly after he was freed under New York’s controversial new bail reform law has been detained by a federal judge as he awaits trial for robbing four banks in a nine-day crime spree.

Prosecutors sought Woodberry’s detention as a danger to the community in a letter to the judge. They said his rap sheet shows five “strong-arm” robbery convictions in South Carolina.

Federal prosecutors say Gerod Woodberry passed this note to a teller during a robbery that occurred after he was released under New York's bail reform law. (Brooklyn U.S. Attorney's Office)

“How is he here today?” Judge Steven Gold asked at Woodberry’s arraignment Sunday, according to the New York Post.

The judge pointed out that Woodberry’s most recent South Carolina robbery conviction was in 2018 and included a lengthy prison sentence, according to the paper.

Woodberry didn't apply for bail and Gold told him he could apply for it Friday, according to the paper.

Cops have identified the person in this image as accused bank robber Gerod Woodberry, 42. Woodberry turned himself in to authorities Friday. His release prompted criticism of a bail reform law that led to his earlier release. (New York City Police Department)

Two days later he was released under the newly enacted bail reform law that requires the release of persons accused of non-violent crimes without bail. Police said Woodberry robbed the banks without a weapon.

Just four hours after being sprung, police said he walked into a Brooklyn bank and handed a teller a note demanding money. The teller gave him about $1,000, police said.

FBI agents arrested him Friday when he showed up in Manhattan Criminal Court and said, "I'm the one that's been robbing banks," the Post reported. last week.

Woodberry has been charged in federal court with the Jan. 10 bank job.