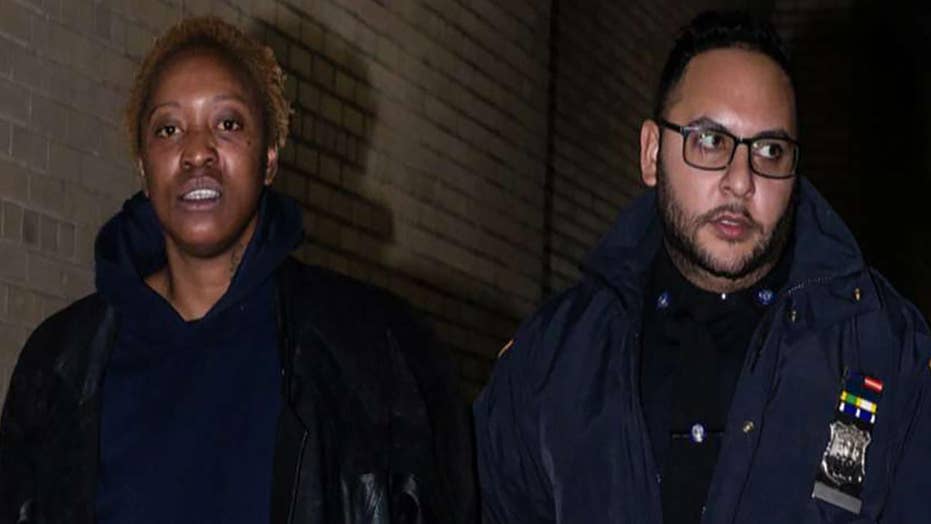 The string of anti-Semitic attacks in the New York City region has some lawmakers worried that a newly enacted bail reform effort at the state level could exacerbate the situation -- with reports already emerging of at least one suspect who was repeatedly released under the new law.

Tiffany Harris was arrested for allegedly attacking three Jewish women in Brooklyn on Dec. 27. With New York City adopting the new bail reform policies before they even officially became law, Harris was released without bail on Saturday, arrested for another alleged assault on Sunday and released again.

This time, Harris was ordered to meet with a social worker, which led to her third arrest on Tuesday, after she allegedly pinched the social worker during the session. After a court appearance for the new case, Harris was finally kept in custody for a court-ordered psychiatric evaluation, The New York Post reported.

"New York’s new bail reforms are a disaster. A bigger, stronger example should have been made of this violent anti-Semitic criminal, not the opposite," Rep. Lee Zeldin, R-N.Y., tweeted Wednesday. "Neither weakness, ignorance or pandering are going to help here to stop the rise in violent anti-Semitic attacks."

“What you're doing is now you are posing a danger to the community,” Lipetri told “Fox & Friends” Thursday.

“The new bail laws resulted in a much more humane and likely more effective outcome and that is what they were intended to do,” she told the Post.

Previously, New York prosecutors would determine whether to make a bail recommendation or agree to have the defendant released on their own recognizance regardless of whether the alleged crime was a felony or misdemeanor, and then the judge would make a determination. Defense attorneys would typically make arguments that bail would be inappropriate, or should be set at a low amount, which judges would take into consideration.

Under the new law, this process no longer takes place for the majority of cases, as courts are now prohibited from setting any monetary bail whatsoever or keeping defendants in custody before trial in almost every type of misdemeanor case, and for a long list of felonies as well.

A long list of offenses from a senior prosecutor that was posted to Twitter by Spectrum News reporter Jaclyn Cangro revealed that bail is forbidden in cases including robbery and burglary hate crimes, third-degree assault as a hate crime, stalking while committing a sex offense, and various degrees of arson.

Should a defendant fail to show up in court, the judge is no longer allowed to immediately issue a bench warrant. Instead, the law says, the judge must give them 48 hours to come in before issuing a warrant.

New York City Councilman Chaim Deutsch made an unsuccessful last-ditch effort in opposing the new bail reform, circulating a letter to Gov. Andrew Cuomo for others to sign online.

“While there are certainly crimes that should be punishable by just a ticket (such as a traffic violation), that is not the case with many others,” the letter said. “Crimes like selling drugs to children, arson, promoting a sexual performance by a child, assault, and stalking are serious offenses that could potentially result in extended prison time. We believe that disallowing judges to use discretion in such cases will result in the release of dangerous criminals onto our streets.”

Deutsch also criticized Cuomo after the governor spoke strongly against the brutal stabbings that took place at a rabbi’s home in Monsey during a Hanukkah celebration. While Cuomo called for the case to be treated as domestic terrorism, Deutsch felt the label was ultimately inconsequential.

“With all due respect@NYGovCuomo - I don’t care what you call it. If 95% of the perpetrators are released hours after they commit attacks, it’ll keep happening,” he tweeted.

New York City Mayor Bill de Blasio defended the no-bail policy in a Fox News appearance Sunday, stating that under the old laws most defendants were released after making bail, and if the only reason a person is kept behind bars is because they cannot afford bail, then that does not solve anything.

When asked about the specifics of Harris’ case, de Blasio said that he was not familiar with the details. Speaking more generally, he argued that defendants -- who are innocent until proven guilty -- should not face hardship unless they are convicted.

"I want tough prosecution, I want consequences," he insisted.