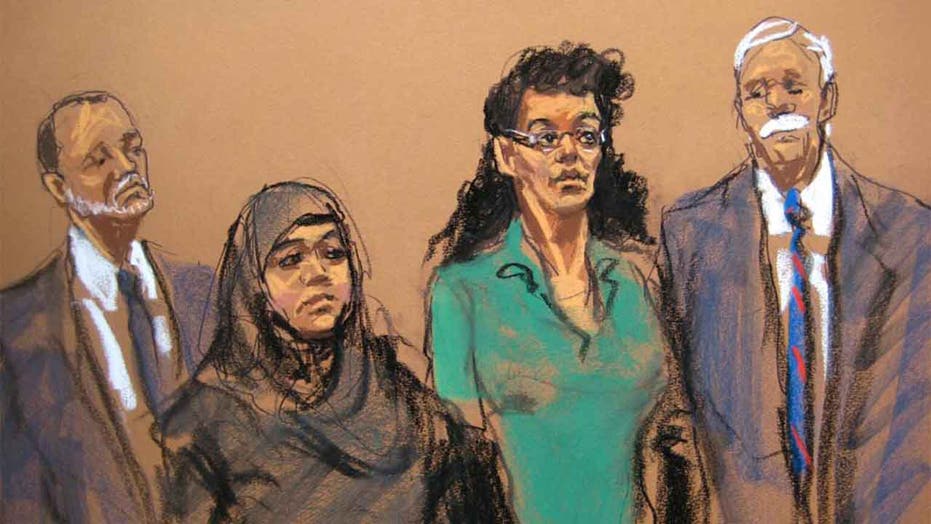 A New York City woman was sentenced Thursday to 15 years in federal prison for studying how to make bombs for a terrorist attack targeting law enforcement in the United States, according to reports.

Asia Siddiqui, 35, of Queens, admitted in federal court in Brooklyn that she and another woman looked online for recipes for homemade explosives and shopped for components at Home Depot with the intent to bomb government targets.

She was arrested in 2015 and pleaded guilty last year.

The other woman charged in the case, Noelle Velentzas, also of Queens, is scheduled to be sentenced March 5.

Seen here in an illustration, Asia Siddiqui and Noelle Velentzas were "inspired by radical Islam" and taught each other chemistry and electrical skills necessary to build explosives and detonating devices, authorities said. (AP)

Prosecutors asked that Siddiqui be sentenced to two decades behind bars, saying she and Velentzas “followed and expressed a violent, warped version of Islam which, in their view, demanded that they teach each other and learn how to build a bomb.”

The women used the teachings of radical jihadist Samir Khan, who was a prominent member of Al Qaeda but is now deceased, as inspiration for their plots.

In a poem called “Take Me to the Lands Where the Eyes Are Cooled,” Siddiqui wrote that she “taste[s] the Truth through fists and slit throats” and that there is “[n]o excuse to sit back and wait -- for the skies rain martyrdom.”

“Had they succeeded in executing a bombing like the prior terrorist attacks they repeatedly discussed and celebrated, the result would have been catastrophic,” prosecutors wrote in a court filing.

Siddiqui and Velentzas discussed several prior terrorist attacks in the U.S. with a New York Police Department (NYPD) counterterrorism officer posing as a convert to Islam. The undercover agent had been assigned to mingle with young Muslims around the city and made recordings of the women discussing their plans.

Authorities said they discovered “tools of the trade for terrorists” inside the women’s homes, including propane gas tanks, soldering tools, jihadist literature and machetes.

“Lives were saved when the defendants’ plot to detonate a bomb in a terrorist attack was thwarted by the tireless efforts of law enforcement,” U.S. Attorney Richard P. Donoghue for the Eastern District of New York said in a news release.  “This is precisely the reason why countering terrorism remains the highest priority of the Department of Justice, and working with the FBI, the NYPD and our Joint Terrorism Task Force partners, we will continue to do everything possible to stay steps ahead of aspiring terrorists and their evil plans to harm Americans.”

Siddiqui’s defense attorneys argued that there had been no specific plot.

They said in court filings that her role in studying the explosive devices had been “inconsequential” and that the so-called terrorism enhancement in the case had distorted the “seriousness” of the crime.

“To construct a bomb from what Ms. Siddiqui had in her basement would have required the expertise of the fictional MacGuyver, and the claim that she was going to independently build her own explosive device is equally fictional,” the defense attorneys claimed.

Defense attorney Charles Swift said he respected the 15-year sentence, but added: “I still believe in the merits of the argument we made.”