DNA and genetic genealogy is helping to solve the coldest of cold cases.

Detectives are using DNA and genetic genealogy to crack even the coldest of cold cases.

In less than two years, the powerful new crime-solving tool that uploads crime scene DNA to a public genealogy website to identify suspects has closed dozens of cold cases, including nine that were very, very old.

Of these nine, the oldest was nearly 52 years cold when it was solved. The other eight were more than 42 years cold. Two of these cases are now being prosecuted in Orange County, Calif.

“Through both traditional DNA and genealogical DNA, we now have the opportunity to solve decades-old cases that would have otherwise been left unsolved,” said Orange County District Attorney Todd Spitzer.

“These victims and their families have been waiting for justice for decades, and the addition of genealogical DNA is now helping us to advance our efforts to achieve justice for crime victims.”

Here's a breakdown of the newly solved, long-ago cold cases:

Susan Galvin was 20 years old and working as a records clerk for the Seattle Police Department when she was found dead in a parking garage in July 1967. She had been raped and strangled.

Those questioned after the murder included a professional clown who was never charged for lack of evidence. DNA cleared the clown in 2016 after he was tracked down in Utah.

Seattle Police homicide Detective Rolf Norton, left, talks to reporters near a photo of Susan Galvin, who was murdered in Seattle in 1967. (AP Photo/Ted S. Warren)

In May, Seattle police identified Galvin's killer as Frank Wypych, who served in the Army and died of complications from diabetes in 1987. He was 26 at the time of the murder.

Parabon Nano Labs genealogist CeCe Moore came up with two distant cousins of Wypych’s when the crime scene DNA was uploaded to the GEDMatch.public genealogy database.

“Fifty-two years later we learn the who, but still have no clear understanding as to the why,” Galvin’s brother Lorimer Galvin said. “There will always be that lingering question."

Loomis, 20, was riding a bicycle to a stable to ride her horse when she was killed in August 1972 in Mill Creek, Washington. The cause of death was a bullet to her head. She also was raped.

“This was such an innocent victim. She was just riding her bicycle down the road when she ended up being raped and murdered,” said Snohomish County Sheriff’s detective Jim Scharf told Q13 Fox. 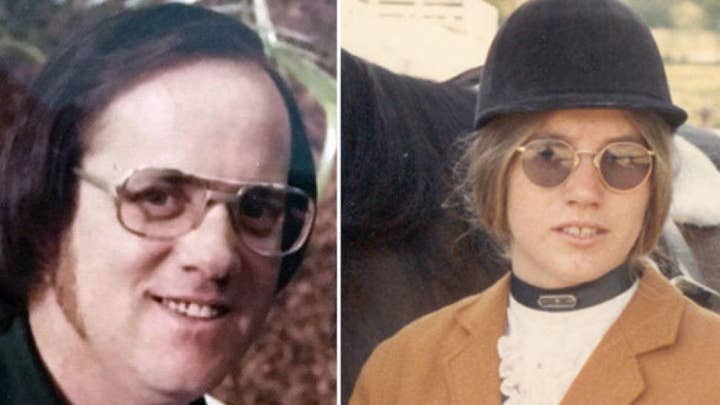 In April, Terrence Miller, 77, of Edmonds, Wash., was arrested for her murder.

His DNA was found on a boot Loomis was wearing when she was killed and submitted to GEDmatch by Parabon, which led to matches to a few of Miller’s relatives.

Miller awaits trial in June and is free on a $1 million bond.

Milam was 20 years old when she was murdered on the campus of Indiana State University in September 1972. She was gagged with tape, bound with rope, raped, strangled and crammed into the trunk of her car.

Her father found her there during a search.

In May, Terre Haute police told a news conference that crime scene DNA submitted to GEDMatch identified Jeffrey Hand as her killer. He was 23 at the time of her murder.

The uploaded DNA produced a match to a distant relative of Hand’s.

A deputy killed Hand in Indiana in 1978 as he tried to abduct a woman. Five years earlier, he was found not guilty by reason of insanity in the dead of a man in Illinois whom he had abducted along with the man's wife.

Terre Haute Police announced a break in the murder of Pam Milam at Indiana State University nearly 47 years ago, identify Jeffery Hand, a salesman of record albums, as the killer. He was 23 at the time. (Terre Haute Police Department)

“At least we now know who he is and he won’t hurt anyone else again,” Milam’s sister Charlene Stanford, 69, said.

Police in Billings, Mont., found the couple dead in their home in November 1973. They had been strangled and Linda had been raped. He was a Vietnam veteran and she was an employee at a warehouse.

Investigators conducted hundreds of interviews and even enlisted the help of "The Amazing Kreskin" when the mentalist paid a visit to Billings, according to a report.

In May, Yellowstone County deputies said the Bernhardts were killed by Cecil Caldwell, who had worked with Linda at the warehouse. Caldwell died in 2003 at age 59.

Authorities found Leslie Perlov, 21, dead near Stanford University in February 1973, three days after she disappeared. The Stanford graduate had been strangled. Her killer stuffed her pantyhose down her throat.

In November 2018, a 73-year-old man John Getreu, of Hayward, Calif., was arrested and charged with Perlov’s murder. Stanford had employed him years earlier.

Investigators examining the cold case came across a DNA sample that had not been tested. The match to Getreu came after it was submitted to GEDMatch by Parabon.

In May, Getreu was charged with a second murder, Janet Taylor, the 21-year-old daughter of a man who coached football at Stanford. Taylor was found strangled in March 1974.

Linda Ann O’Keefe was 11 when she was killed in July 1973 in Newport Beach, Calif., as she was walking home from summer school in a white dress her mother had sewn. Police found her body in a ditch the day after she was reported missing. She had been sexually assaulted and strangled.

Police conducted a fruitless search for a man in a turquoise van who had been seen speaking to Linda the day she disappeared.

In February 2019, James Neal, 72, of Monument, Colo, was charged with killing Linda. He had been living in Southern California at the time of the murder.

“It was the genealogical DNA that was the pointer” to Neal, Orange County DA Spitzer said.

“For 45 years, the Newport Beach Police Department continued to search for Linda’s killer,” Police Chief Jon Lewis said. “Generations of investigators worked on her case. We never gave up.”

Since his arrest, Neal has been charged with sexually assaulting two children in California years after Linda was killed.

He is awaiting trial behind bars.

Pamela Maurer was killed at the age of 16 after leaving a friend’s house in Lisle, Ill., to go to a McDonald’s. She had been raped and strangled.

Last week, authorities told a news conference her killer was Bruce Lindahl, a man police suspect was a serial killer.

Bruce Lindahl, a possible serial killer, has been identified as the person who raped and strangled 16-year-old Pamela Maurer after she left a friend's house in Lisle, Ill., 44 years ago. (DuPage County State Attorney's Office )

“We finally put a name and a face to this monster," Lisle detective Chris Loudon.

After uploading DNA obtained from Maurer to GEDMatch, Parabon's Moore came up with Lindahl as a suspect after finding multiple distant cousins of his through the website, CBS 2 Chicago reported.

“My work and my team’s work is really about providing answers to these families for years and decades,” Moore said according to the station.

Lindahl, who was 23 when Pamela was murdered, suffered a fatal self-inflicted stab wound in 1981 as he was killing a teen named Charles Huber.

He is believed to have killed Deborah McCall, a 17-year-old Downers Grove, Ill., high school student, who disappeared in 1979 and has never been found.

Leslie Penrod Harris, 30, was having dinner with her husband at a Costa Mesa, Calif., restaurant in May 1973 when they had an argument and she left him there. He reported her missing when she didn’t return.

The next day her naked body was found near the Marie Corps Air Station El Toro. She had been raped and strangled.

In May, Eddie Lee Anderson, 66 of River Ridge, La., was arrested in May 2019 and charged by Spitzer's office with Harris’ murder. He was a former Marine who lived near the restaurant at the time of the murder and had been stationed at El Toro in prior years.

Prosecutors said investigators working with the FBI’s Investigative Genealogy Team were able to identify Anderson as a person of interest after building a genealogy profile using crime scene DNA.

Anderson was jailed and is awaiting trial.

Ellen Matheys, 24, and David Schuldes, 25, were on a camping trip when they were killed in July 1976 at a park in Silver Cliff, Wis. They had gotten engaged a few months earlier.

Schuldes was struck by a bullet fired from 50 feet away, police said. Matheys either ran from the killer or was led into woods where she was raped and then shot twice in the chest as she was putting her clothes back on, according to police.

In March, Raymond Vannieuwenhoven, 82, was arrested at his home in the small town of Lakewood, Wis., and charged with murder.

The arrest came after crime scene DNA was uploaded to GEDMatch and identified a family connection to the suspect.

Vannieuwenhoven has been ordered to undergo a psychiatric exam to determine if he is competent to stand trial, the Green Bay Press-Gazette reported this month.