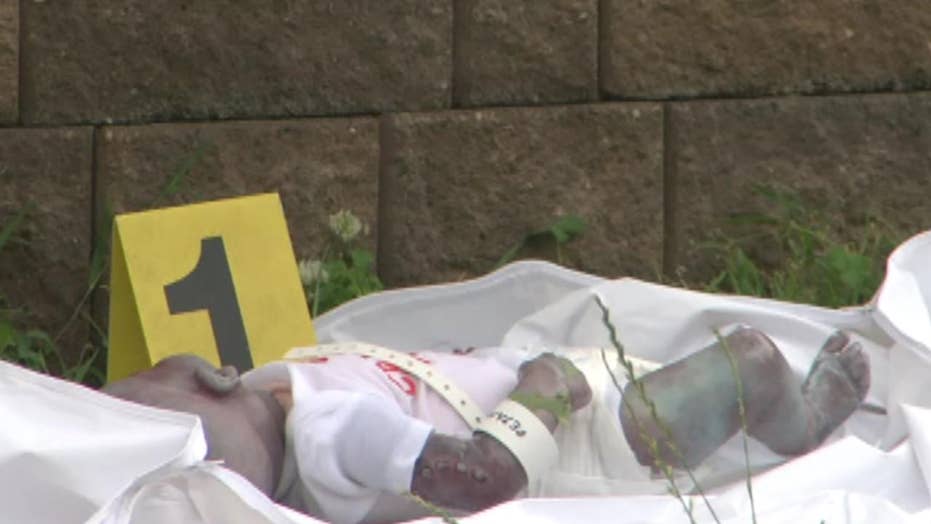 Police: Report of dead baby turns out to be life-like doll

Raw video: Police say what appeared to be a dead infant has turned out to be a realistic-looking doll at Crocheron Park in Queens, NY.

The horrifying discovery of what authorities believed to be a dead baby outside a park in New York City on Tuesday morning -- sparking a massive police response -- turned out to just be a realistic-looking doll.

Authorities rushed to Crocheron Park in the Bayside neighborhood of Queens just before 8 a.m. after a woman out for a run reported seeing a "baby" lying face-down in the grass.

Detectives swarmed the park looking for evidence, setting up a crime scene tent with yellow tape -- only to discover the blue-skinned corpse was just a doll.

"That's really creepy and sick that someone would do that, very disturbing," a neighbor told FOX5.

What was thought to be a dead baby instead turned out to be a doll, with its skin apparently purposely colored to resemble decomposing skin. (FOX5)

Police initially reported the child was about three months old and had been pronounced dead at the scene due to an undetermined cause. But then a closer inspection revealed the object in the grass was a doll or some sort of theatrical prop, with its skin apparently purposely colored to resemble decomposing flesh.

One giveaway was the baby's T-shirt, which read, "the crawling dead" and was not initially visible because the doll was on its stomach.

The error was discovered when personnel from the city's medical examiner arrived to retrieve the body.

At one point, another neighbor said as many as 200 officers were canvassing the park looking for evidence.

The discovered was made outside the Crocheron Park in the Bayside neighborhood of Queens just before 8 a.m. on Tuesday. (FOX5)

"I’m glad it’s not a 3-month-old child, but I think there's somebody that made a huge mistake," Bob O'Connell told FOX5, adding the investigation went on for hours.

An NYPD spokesperson said the police officers initially responding to the park "worked first and foremost to preserve and protect the potential crime scene, and gather evidence so any perpetrator could be apprehended."

"Thankfully, it turned out to be some sort of prop," a spokesperson said.

Officials from the NYPD and FDNY said the episode is still under investigation.