At least a dozen killed as tornadoes rip through the South

Mississippi and Louisiana – two states dealing with an increase of coronavirus cases – were hit Sunday with a deadly storm system that produced dozens of tornadoes that ripped through hundreds of homes and buildings, resulting in at least 20 deaths reported in the region.

The National Weather Service's Storm Prediction Center (SPC) said severe thunderstorms will barrel now toward the East Coast, with the threat stretching from southeast Georgia through the Carolinas into Virginia through Monday afternoon.

"We've had over 50 reports of tornadoes over parts of the South and the Gulf Coast," Fox News Senior Meteorologist Janice Dean said on "Fox & Friends."

"The Storm Prediction Center said this is the area that's going to potentially see the damage, including tornadoes, long-lasting, catastrophic tornadoes and now we are getting reports of many deaths."

Besides tornadoes, there were numerous reports of large hail, damaging winds and flash-flooding throughout the region.

Storm reports from a severe weather outbreak on Easter Sunday.

In Mississippi, there was one long-track tornado in the southern part of the state that was on the ground for more than 100 miles.

A line of severe thunderstorms continues marching towards the East Coast on Monday morning. (Fox News)

Several tornado watches remain in effect across the Southeast and more will be issued through Monday morning, eventually across the Carolinas into the Mid-Atlantic. Most severe storms will move off the East Coast by Monday afternoon.

The severe weather threat for Monday.

"Unfortunately, we are going to continue to see the damage across portions of the Carolinas, up toward the Mid-Atlantic and the Northeast," Dean said. "So the next several hours are going to be crucial."

The greatest threat for tornadoes on Monday. (Fox News)

The Mississippi Emergency Management Agency said Monday morning at least 11 people were killed in that state. At least six deaths were reported in Georgia, according to FOX5.

In Arkansas, one person was killed when a tree fell on a home in White Hall, southeast of Little Rock, the Jefferson County Department of Emergency Management said.

In South Carolina, a person was found dead in a collapsed building near Seneca as an apparent tornado struck, Oconee County Emergency Management Director Scott Krein told the Associated Press. And in North Carolina, a person was killed by a falling tree in Davidson County, northeast of Charlotte, as high winds were blowing through, Sheriff's Capt. Mike Burns said. 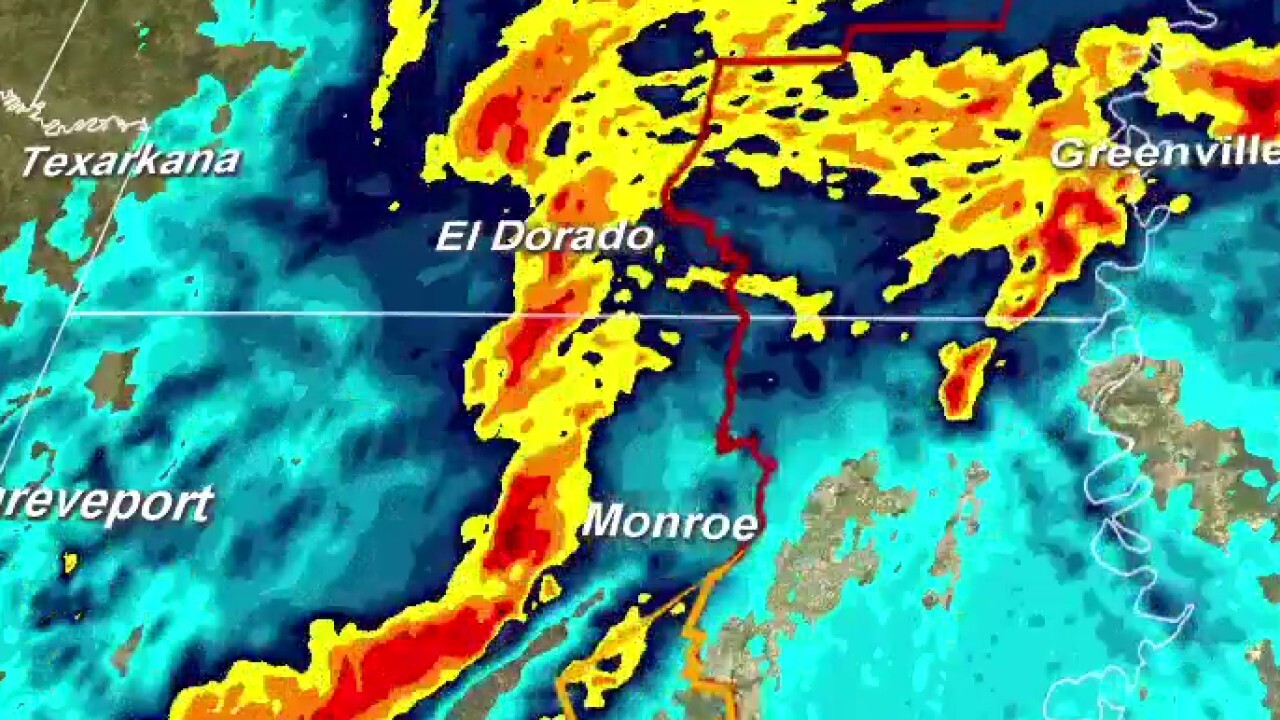 "Robert left this world a hero, as he shielded Mrs. Paula during the tornado," the sheriff's office said. He was a very valuable employee and will be greatly missed."

Mississippi Gov. Tate Reeves declared a state of emergency Sunday night after he said several tornadoes had struck the state.

"This is not how anyone wants to celebrate Easter," Reeves said on Twitter. "As we reflect on the death and resurrection on this Easter Sunday, we have faith that we will all rise together."

Around one million people were without power after the storms, according to poweroutage.us.

Before the storms moved into Mississippi, the weather service reported multiple tornadoes and damaging winds over much of northern Louisiana.

A home had its roof torn off after a tornado ripped through Monroe, La., just before noon on Sunday, April 12, 2020 causing damage to a neighborhood and the regional airport. (Nicolas Galindo/The News-Star via AP)

Homes in Ouachita Parish, La., were "leveled" while families were inside sheltering in place over fears of the COVID-19 pandemic. The News-Star reported that officials in the area were forced to find temporary housing for those affected by the storms while trying to keep residents safe from the virus.

“Because of COVID-19, we are not looking at sheltering like we have in the past,” Shane Smiley, the Ouachita Parish Police Jury president, told the Monroe News-Star. “We are trying to work through this and see if we can secure hotel rooms. This is for anybody who is displaced. The reason being is we are trying to continue social distancing."

Mississippi has 2,781 confirmed coronavirus cases and 96 deaths. Louisiana has 20,595 cases and 840 deaths. Coronavirus complicated tornado preparedness, especially for people who must seek shelter with others.

The only way to slow the spread of the new coronavirus is to self-isolate. The only way to stay safe in a tornado is to shelter in a strong building, often a public one.

Forecasters and emergency officials in several states have offered guidance about using shelters as tornado season approaches amid the pandemic. The NWS office in Birmingham. said in a statement that health officials are recommending during the pandemic the first priority during a tornado warning should be "to protect yourself."

The mayor of Monroe, in Louisiana, Jamie Mayo, told KNOE-TV that the storm damaged 200-300 homes in and around the city. Flights were canceled at Monroe Regional Airport, where siding was ripped off buildings and debris was scattered on runways. Airport director Ron Phillips told the News-Star the storm caused up to $30 million in damage to planes inside a hangar.

In northwest Louisiana, officials reported damage to dozens of homes in DeSoto and Webster parishes, according to news outlets.