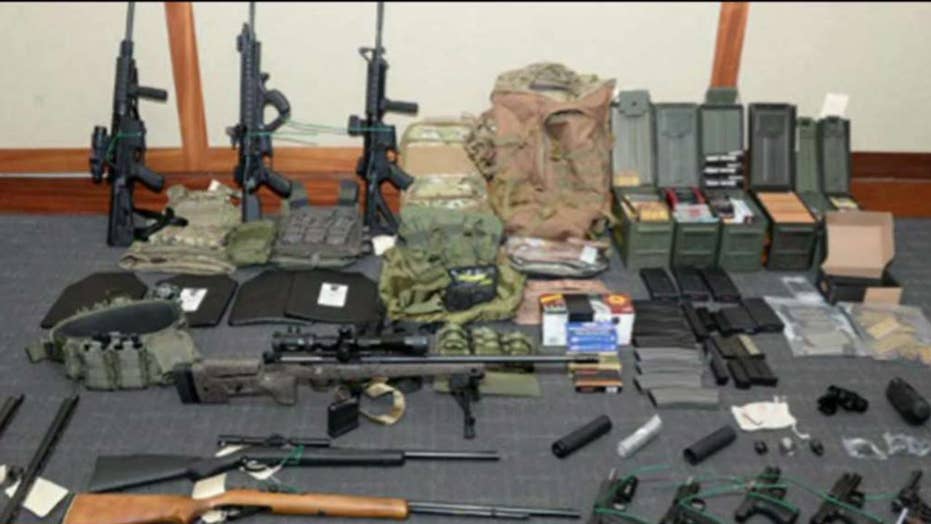 A U.S. Coast Guard lieutenant arrested last week on weapons and drug charges is a white nationalist who apparently had a hit list of Democratic lawmakers and activists as well as prominent media personalities, federal prosecutors said Wednesday.

In a motion for pretrial detention filed in federal court in Maryland, authorities said Lt. Christopher Paul Hasson, 49, was arrested Friday and charged with unlawful possession of a firearm and an opioid called Tramadol.

However, the filing described the charges as "the proverbial tip of the iceberg," and referred to Hasson as "a domestic terrorist" who meant to "murder innocent civilians on a scale rarely seen in this country."

The filing was first noted by researchers from George Washington University's Program on Extremism.

Prosecutors say Hasson regularly read a manifesto written by Anders Behring Breivik, a Norwegian far-right extremist who killed 77 people in a pair of 2011 terror attacks, and stockpiled weapons and ammunition. According to the documents, federal agents recovered 15 firearms and "conservatively" more than 1,000 rounds of ammunition from Hasson's "cramped basement apartment" in Silver Spring, Maryland.

According to the document, Hasson organized a spreadsheet of so-called "traitors" that he subdivided into three categories: A,B, and C. So-called "Category A" traitors included Democratic Sens. Chuck Schumer of New York, Tim Kaine of Virginia, Richard Blumenthal of Connecticut (referred to as "Sen blumen jew" in the spreadsheet), Elizabeth Warren of Massachusetts (referred to as "poca warren"), Kirsten Gillibrand of New York, Cory Booker of New Jersey and Kamala Harris of California.

Prosecutors say Hasson Googled topics including "what if trump illegally impeached," "best place in dc to see congress people," and "civil war if trump impeached" roughly a month before his arrest.

REP. STEVE SCALISE: A CRAZED GUNMAN NEARLY KILLED ME -- LEADERS MUST DO MORE TO KEEP VIOLENCE OUT OF POLITICS

The filing said Hasson had "espoused extremist views for years" and quoted a letter he drafted to "a known American neo-Nazi leader" in September 2017, nearly two months after the deadly violence at a white nationalist rally in Charlottesville, Virginia. In the letter, Hasson described himself as "a long time White Nationalist, having been a skinhead 30 plus years ago before my time in the military." Hasson added that "I fully support the idea of a white homeland ... We need a white homeland as Europe seems lost. How long we can hold out there and prevent n-----ization of the Northwest until whites wake up on their own or are forcibly made to make a decision whether to roll over and die and to stand up remains to be seen."

Three months earlier, prosecutors say Hasson drafted an email to "friends" in which he said he was "dreaming of a way to kill almost every last person on the earth. I think a plague would be most successful but how do I acquire the needed/ Spanish flu, botulism, anthrax not sure yet but will find something."

Prosecutors said Hasson was an acquisitions officer for the National Security Cutter Acquisition Program who had been assigned to the Coast Guard's headquarters in Washington since June 2016. He previously served in the Marine Corps and the Army National Guard. A Marine Corps spokesperson said Hasson served in that branch between 1988 and 1992 and worked as an aircraft mechanic on F/A-18 Hornets.

"An active duty Coast Guard member stationed at Coast Guard Headquarters in Washington, D.C., was arrested last week on illegal weapons and drug charges as a result of an ongoing investigation led by Coast Guard Investigation Services, in cooperation with the FBI and the Dept. of Justice," Coast Guard spokesman Lt. Cmdr. Scott McBride said in a statement. "Because this is an open investigation, the Coast Guard has no further details at this time."

A detention hearing for Hasson is scheduled for 1 p.m. Thursday in federal court in Greenbelt, Maryland, just outside Washington.