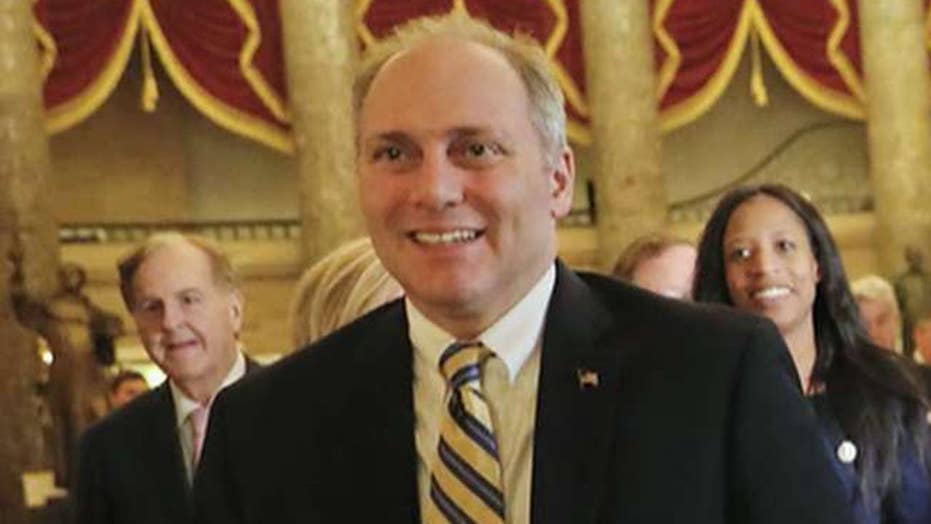 A day in the life of Rep. Steve Scalise

Steve Doocy spends the day on Capitol Hill with the House majority whip.

There is no place for violence in politics. Period.

We encourage free and open debate, and we need engaged citizens. That is our responsibility as Americans.

No Americans should feel intimated or at risk of violence for speaking their mind, or even doing something as simple as sharing their political party affiliation.

After my own personal experience of a crazed gunman attempting to assassinate Republican members of Congress on a baseball field, I have become more vocal in calling out violence and threats against people in both parties.

We are a country of diverse viewpoints and that is what makes America great. We are able to discuss those differences freely and resolve them at the ballot box. But no one has the right to harass, threaten, or incite violence against someone with different opinions or beliefs. That is, frankly, un-American and contrary to the very principles this country was founded upon.

No one has the right to harass, threaten, or incite violence against someone with different opinions or beliefs. That is, frankly, un-American and contrary to the very principles this country was founded upon.

Third World dictators attack and punish their political enemies. That is not what America stands for, and we condemn those despots and dictators who use fear, intimidation and violence to shut down those who disagree with them.

We now need our leaders in both parties to publicly criticize that same type of unacceptable behavior here at home. The strength of our democracy depends on our ability to have civil debate without fear of retribution. We settle our differences at the ballot box, not with weapons and threats to incite violence.

The number of attacks and death threats against government officials has been increasing at an alarming rate.

There are many examples of this. These include: my own experience of being shot and seriously wounded; Federal Communications Commission Chairman Ajit Pai receiving threats on his life and the lives of his family; and Department of Homeland Security Secretary Kirstjen Nielsen and White House press secretary Sarah Sanders being shouted at and compelled to leave restaurants.

Some additional examples: Florida Attorney General Pam Bondi was spit on. The office of Sen.  Susan Collins, R-Maine, is currently suffering through calls that encouraged sexual assault over her future vote on Supreme Court nominee Judge Brett Kavanaugh. And just this week we saw a Republican congressional candidate fight off an attempted stabbing.

This has to stop.

Unless more leaders speak out against this violence, it will only continue. Instead of calling for harassment, we need more leaders in both parties to condemn this rhetoric and the violent actions of their supporters.

We cannot afford to sit on the sidelines of this issue. I am calling on everyone, whether Republican or Democrat, to call out violent actions and violent rhetoric. If you have to resort to violence, you’re probably losing the argument.

Let’s return to civility, for the sake of our democracy.