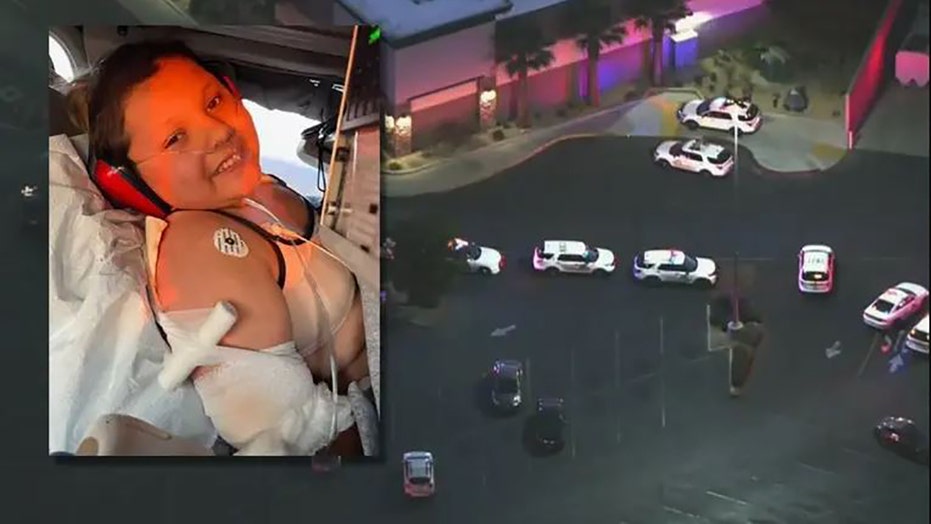 A 9-year-old California girl wounded by stray bullets in a mall shooting on Tuesday is recovering after a bullet fractured her arm bone, the girl’s mother said.

The child, identified by family as Ava Rose, was shot multiple times while waiting to take photos with the Easter Bunny at the Mall of Victor Valley in Victorville when gunfire erupted, FOX11 Los Angeles reported.

The third-grader was rushed to Loma Linda University Medical Center for treatment, her mother, Natalie Braga, told the station. Family said that stray bullets hit Ava twice in the forearm and once in the upper arm.

A 9-year-old girl, whom family identified as Ava Rose, was wounded Tuesday at the Mall of Victor Valley in Victorville, California, when she was struck by bullets a store owner fired at alleged shoplifters, according to local reports. (FOX11 Los Angeles KTTV)

Braga said the bullet that hit her daughter’s upper arm fractured the bone – a serious injury that doctors are having difficulty repairing.

Since the fracture can’t be surgically repaired, Ava will instead have to wear a brace and it will take much longer to heal, the girl’s grandmother, Robin Saldarelli, said.

San Bernardino County deputies said they received reports of a shooting at the mall just before 6:30 p.m. and were alerted that a child had been shot.

Emergency services responded to a shooting incident at the mall in Victorville, where a child was shot Tuesday.  (FOX11 Los Angeles KTTV)

Authorities say Marquel Cockrell, the co-owner of the Sole Addicts shoe store inside the mall, had chased multiple people he accused of shoplifting and opened fire. He missed the intended targets, striking the child instead.

Cockrell fled the scene but was tracked down and arrested in Nevada. He was taken into custody on a warrant for attempted murder and had bail set at $1 million.

He is expected to be extradited back to California.