Mourners attended a private funeral at the Lincoln Memorial United Methodist Church in Buffalo, New York, Friday for Deacon Heyward Patterson, a 67-year-old who was at the Tops grocery store to pick up supplies for the church’s food kitchen when he became the victim of a hate-filled mass shooting.

Patterson was one of ten people killed when the gunman rushed in with an AR-15. Three others were wounded.

"His loving memories remain in the hearts of many family and friends," an obituary posted by the Thomas Edward Funeral Home reads.

Patterson was being buried at St. Matthew’s Cemetery, just a mile and a half from where a gunman took his life in an unprovoked attack.

A crowd gathers as police investigate after a shooting at a supermarket on Saturday, May 14, 2022, in Buffalo, N.Y. Multiple people were shot at the Tops Friendly Market. Police have notified the public that the alleged shooter was in custody. (AP Photo/Joshua Bessex)

BUFFALO TEEN WHOSE AUNT, COUSIN WERE INSIDE GROCERY STORE DURING ATTACK: ‘WE’VE GOT TO COME TOGETHER'

"From what I understand, he was assisting somebody putting their groceries in their car when he was shot and killed," said the Rev. Russell Bell. "Deacon Patterson was a man who loved people. He loved the community just as much as he loved the church."

Payton Gendron, a White 18-year-old from hundreds of miles away, allegedly drove to Buffalo last week from the outskirts of Binghamton with multiple weapons, body armor and a streaming camera glued to his tactical helmet before opening fire at a supermarket in a predominantly Black neighborhood. 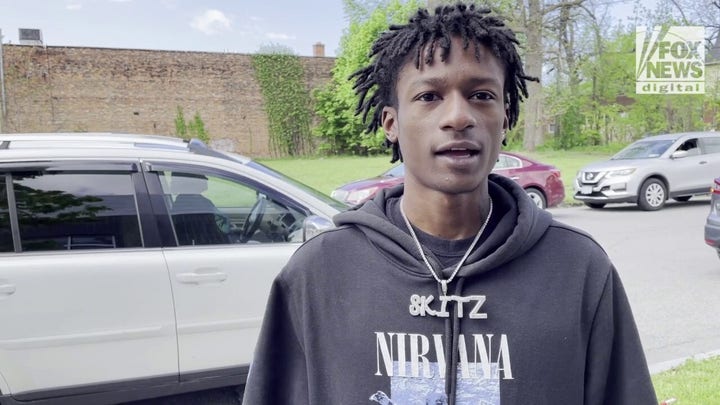 The Justice Department is calling the attack "a hate crime and an act of racially motivated violent extremism," and President Biden called it an act of domestic terrorism during a visit to the city Tuesday.

The suspect was being held without bail and on suicide watch. If convicted on the state charges, he will serve life in prison. Federal authorities have also opened an investigation.

At a court appearance Friday, someone inside the courtroom was escorted out after exclaiming, "Payon, you’re a coward!"

Buffalo shooting suspect, Payton S. Gendron, who is accused of killing 10 people in a live-streamed supermarket shooting in a Black neighborhood of Buffalo, is escorted in the courtroom in shackles, in Buffalo, New York, U.S., May 19, 2022. (Brendan McDermid)