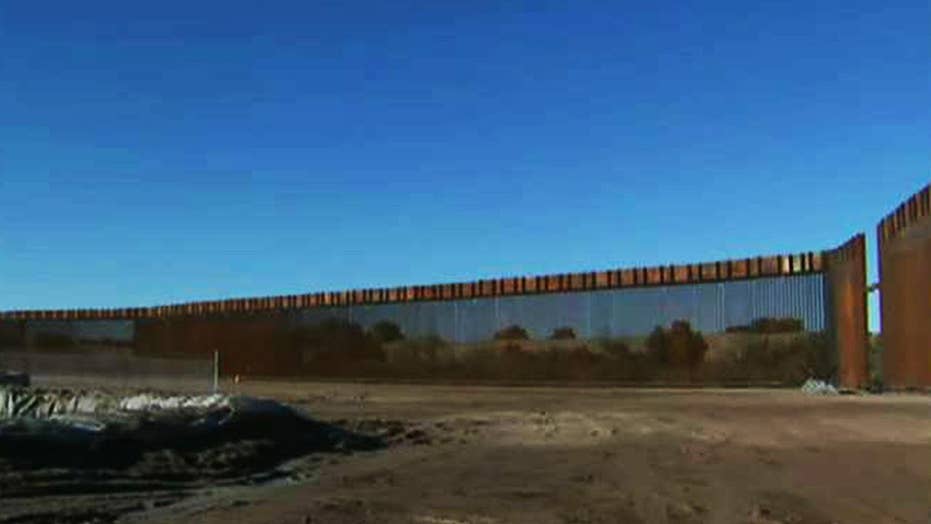 Customs and Border Protection Acting Commissioner Mark Morgan expresses confidence that 450 miles of new wall will be built by the end of 2020.

The infamous Santa Ana winds, known for causing damage across Southern California, blew several panels of the new border wall being constructed onto the Mexican side of the border, according to officials.

The steel bollard panels, which are 30 feet tall, had just been anchored in concrete that was not yet cured when the gusts knocked them into neighboring trees and onto a road. At the time, the National Weather Service said winds gusts were reported between 20 to 30 mph.

FLORIDA SINKHOLE OPENS UNDERNEATH NEIGHBORHOOD, CAUSES ONE HOME TO COLLAPSE

Ralph DeSio, a spokesperson for U.S. Customs and Border Protection in San Diego, told Fox News on Thursday that high winds impacted a "handful of panels" under construction.

Newly installed panels from the US border wall in Calexico, California, fell over in high winds Wednesday, landing on trees on the Mexican side of the border. (Photo by STR/AFP via Getty Images)

"No property damage or injuries were sustained during this uncommon event while the concrete was drying, and construction remains ongoing," DeSio told Fox News.

The construction in Calexico is part of a project to replace 11 miles of border barrier in the area, similar to the wall in San Diego, according to the San Diego Union-Tribune. Border Patrol Agent Carlos Pitones told the newspaper that Mexican authorities "responded quickly" and were able to divert traffic from the area after the panels fell.

Video posted to Twitter shows trees blowing in the wind after the panels fell.

Earlier this month, the Trump administration marked the 100th mile of wall construction along the southern border, describing it as a “milestone achievement” and promising that there are many more miles to come by the end of the year.

The new stretch of border wall includes 14 miles of 18-foot, primary steel bollard fencing built in San Diego County as part of President Trump’s campaign promise to build a wall along the southern border. It has a secondary 30-foot steel bollard barrier behind.

How effectively the new barrier deters migrants and crossings is tough to calculate. Its construction, however, coincided with a sharp decline in apprehensions. In August 2019, there were 3,326 apprehensions in the San Diego sector, down from 6,880 in March and 5,884 in May.

"The border wall system is imperative to securing the border and is what border patrol agents have asked for and need to maintain operational control of the southern border," DeSio told Fox News on Thursday.

A high wind warning has been extended through Friday morning across parts of Southern California due to strong winds out of the north and northeast.