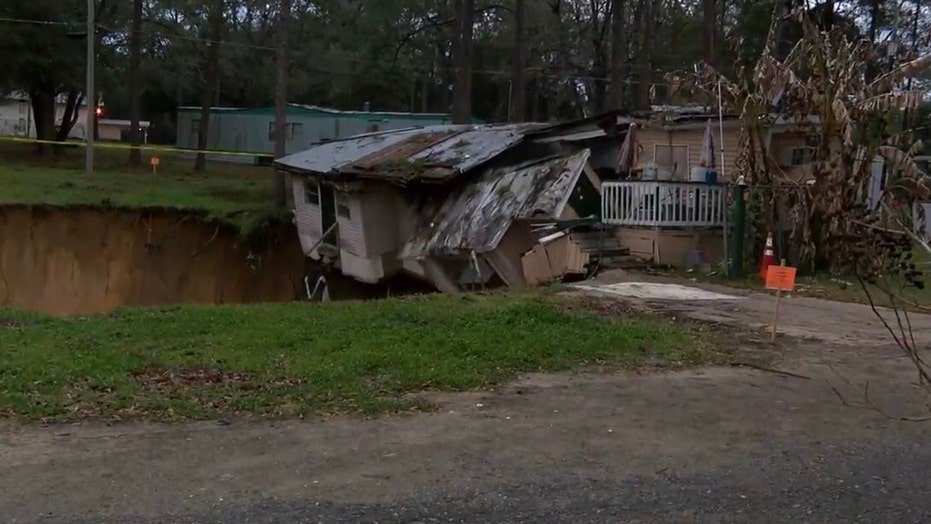 One home in Florida has been destroyed and another is teetering on the edge after a large sinkhole opened up in a Tallahassee neighborhood Tuesday.

The Tallahassee Police Department said it happened around 5:30 p.m. on Tuesday in the 5100 block of Capital Circle Southwest.

"It started off with a shifting of the ground, then trees started falling into a crevice maybe 40-feet deep," Lynn Girman, a resident of the mobile home park, told WCTV-TV.

Tallahassee Police said that several homes were evacuated after the sinkhole opened up, but no injuries were reported.

The sinkhole opened up around 5:30 p.m. on Tuesday in the mobile home park. (Tallahassee Police)

By Wednesday, police asked people to stay away from the area to "avoid sight seeing" as the sinkhole was still active.

"One of the homes fell in this evening. Several families are hurting as they are losing their home," police said in a Twitter post. "Please keep them in your thoughts & prayers."

Video from WTXL-TV shows the moment the homes collapsed into the massive sinkhole.

Matt Hennessy, who operates the mobile home park where the sinkhole formed, told WCTV that the hole was affecting two homes.

PITTSBURGH BUS WITH PASSENGER ABOARD SWALLOWED BY MASSIVE SINKHOLE

He said the sinkhole has been evaluated by an engineering firm and he is working with a contractor to fill the hole.

The hole, which is now around 40 feet wide, cannot be fully measured by fire officials because it's active and may grow further.

A contractor has staged equipment near the sinkhole and is ready to fill it in once the situation stabilizes, WCTV reported.