BALTIMORE -- Juan Grant, who led protests across Baltimore demanding answers after the arrest and in-custody death of his best friend Freddie Gray in 2015, was shot dead on Saturday while driving to his grandmother's house in west Baltimore.

The 33-year-old's murder came on the fourth anniversary of Gray's funeral and the citywide riots that highlighted the frustration and distrust with the police department and the deep divide that exists to this day in Maryland's largest city.

A day after Grant's death, another gunman in the city's western district fired into a crowd of people enjoying an afternoon cookout, killing one man and injuring seven others. 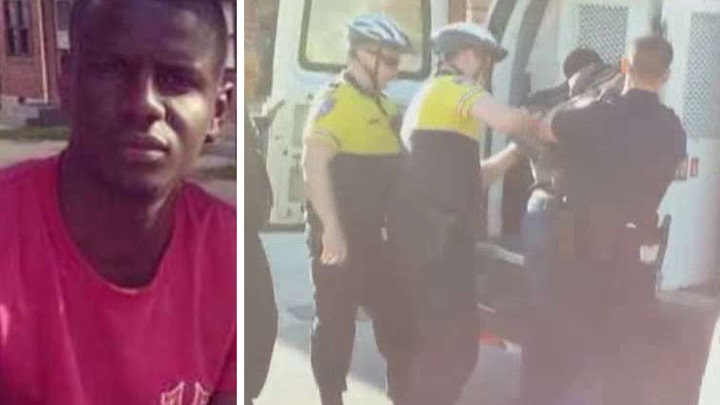 Police Commissioner Michael Harrison said a man approached the group of people on foot and began shooting. Harrison and acting Mayor Jack Young asked the community to help investigators identify the shooter and any possible motive.

"Someone knows something," Young said at a press conference. "These things ... they don't happen by happenstance. People know who's doing these shootings."

The incident occurred about six weeks after Harrison was sworn-in as commissioner. During his swearing-in ceremony on March 12, the former leader of the New Orleans police force and ordained minister, promised to make Baltimore safer and lead the department through sweeping reforms- but the task is proving to be a herculean one and residents say they're losing hope.

Beverly White, who has lived in the city for more than three decades, told Fox News she has struggled to keep her family safe.

"There have been shootings one after another," she said on Monday. "We've had people come here and promise to clean up the streets but nothing happens. People feel unsafe in their neighborhoods. (Harrison) says he's going to turn things around. It's a nice thought, but they keep killing people... it's going to get worse in the summer. It always gets worse in the summer."

Michael Singleton says the relationship the community has with the police department is in a state of disrepair.

"They don't like us and we don't like them," he told Fox News. "I don't see that changing."

To be fair, Harrison inherited a dysfunctional force that's long been distrusted by many residents. Misconduct by officers and chronically high rates of violent crime are just a handful of systemic failures in Baltimore. In 2017, the city had 342 homicides -- which comes out to 56 per 100,000 people. Last year, the homicide count also passed the 300 mark.

Police work near the scene where authorities say several people were shot, at least one fatally, Sunday, April 28, 2019, in Baltimore. (AP)

Charm City has also been struggling with a crisis of confidence when it comes to its political leaders.

Last week, federal agents raided the homes and City Hall offices of Baltimore's embattled Mayor Catherine Pugh, widening an investigation into whether she used bulk sales of her self-published children's book to disguise kickbacks. The early-morning searches were just the latest setback for the politically isolated first-term mayor who campaigned on transparency and ending corruption.

Republican Gov. Larry Hogan joined a growing group of people who want Pugh to step down and has called on the state prosecutor to investigate allegations of "self-dealing" by Pugh.

“Now more than ever, Baltimore City needs strong and responsible leadership,” Hogan tweeted Thursday. “Mayor Pugh has lost the public trust. She is clearly not fit to lead. For the good of the city, Mayor Pugh must resign.”

Baltimore City Council members echoed the sentiment, and Maryland Comptroller Peter Franchot tweeted last month: "The Mayor has to resign - now. The people of Baltimore are facing too many serious challenges, as it is, to also deal with such brazen, cartoonish corruption from their chief executive."

Pugh has been on paid administrative leave for the past month as calls to go grow, but she is hardly the first Baltimore mayor who has faced calls to leave. Democratic Mayor Sheila Dixon resigned from office in 2010 to save her pension and preserve the possibility of working for the city or state again. Pugh beat out Dixon by about 3,000 votes to clinch the 2016 Democratic primary.

John Dedie, a political science coordinator at the Community College of Baltimore County, told The Associated Press that one of the city's greatest fears is to be "seen as a laughing stock, like Detroit was years ago until the governor of Michigan put it in receivership."

Another problem facing Maryland -- Baltimore in particular -- is its increase in illegal drugs, which has led to turf wars and violence. The state itself has one of the country's most punishing overdose mortality rates and noted a record-high number of drug deaths in 2018, fueled by an increase in fentanyl-related fatalities.

And if that weren't enough, Baltimore is also startlingly segregated. According to The Associated Press, there is a 20-year life expectancy gap between disenfranchised and overwhelmingly black neighborhoods and areas that are whiter and more affluent.