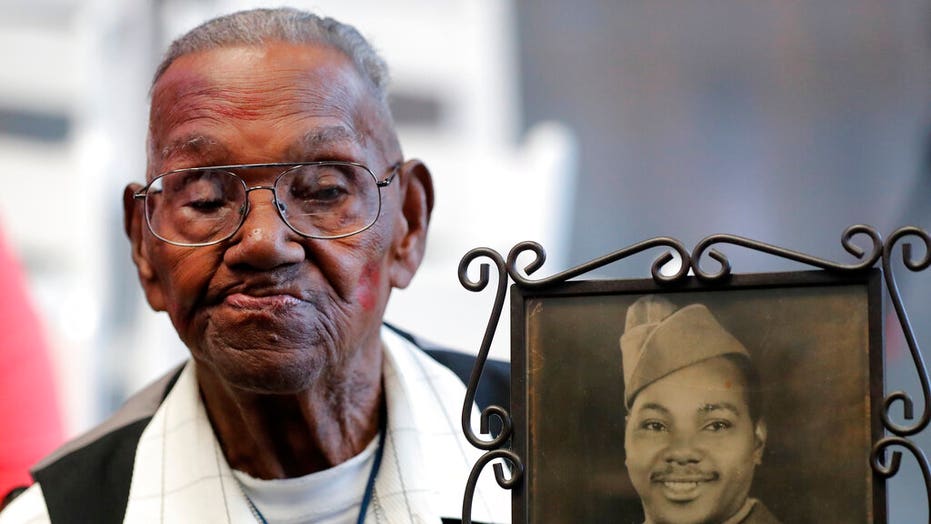 Comedian and advocate Jon Stewart in a new PSA to raise awareness of the issues that veterans exposed to burn pits are facing.

Brooks, born on Sept. 12, 1909, was honored on Thursday at the National World War II Museum in New Orleans. Spotted with a bright lipstick kiss on his cheek at the event, Brooks served in the 91st Engineer Battalion stationed in New Guinea and then the Philippines — a predominately African-American unit of the U.S. Army.

MONTANA MEN WHO LIED ABOUT EING VETERANS SENTENCED, ORDERED TO WRITE NAMES OF AMERICANS WHO DIED IN WARS

The 110-year-old, who served between 1940 and 1945, was a servant to three white officers and his daily routine included cleaning their sheets and uniforms and shining their shoes. He attained the rank of Private 1st Class during the war.

LAUREN BRUNER, ONE OF LAST SURVIVORS OF USS ARIZONA, DIES AT 98

Brooks' newfound title comes after the death of Richard Overton, previously the oldest living WWII veteran. Formerly a member of the U.S. Army, Overton died in December at age 112.

Lawrence Brooks received a dog tag honoring him as the oldest living veteran of the war. He was born Sept. 12, 1909. (AP Photo/Gerald Herbert)

The museum has been celebrating Brooks' birthdays since his 105th, in 2014, according to The Times-Picayune and The New Orleans Advocate.

“We consider him ‘our veteran,'" Crean said.

Brooks, who uses a walker, is blind in one eye and has poor vision in the other. He does suffer from low blood pressure and dehydration, but his hearing, however, is good, and he's never suffered from any major diseases or cancers.

Brooks' birthdays have been celebrated at the National World War II Museum in New Orleans since 2014.  (AP Photo/Gerald Herbert)

“I’ve started to think about not having many birthdays left. But I’m not worried about it, because God has let me live this long already," Brooks said. “I think it’s because I’ve always liked people so much. Oh yes, I do.”