America’s oldest veteran, Richard Overton — who served in the Army during World War II and credited God, whiskey and cigars for his longevity — died Thursday in Texas at the age of 112. (AP Photo/Pablo Martinez Monsivais)

America’s oldest veteran, Richard Overton, who served in the Army during World War II and credited God, whiskey and cigars for his remarkable longevity, died Thursday in Texas at the age of 112, reports say.

He had been hospitalized for the last week with pneumonia, his family said.

Shirley Overton, whose husband was Richard’s cousin, said the vet died Thursday evening at a rehab facility in Austin.

Overton, who was also thought to be the oldest living American, was born in 1906 in Bastrop County, just outside Austin, Texas.

Overton was in his 30s when he volunteered for the Army, and was at Pearl Harbor just after the Japanese surprise attack in 1941.

The WWII veteran served in the all-black 1887th Engineer Aviation Battalion from 1942 to 1945, a period that included stops in Angaur, Palau; Peleliu, Micronesia; and Iwo Jima, Japan. 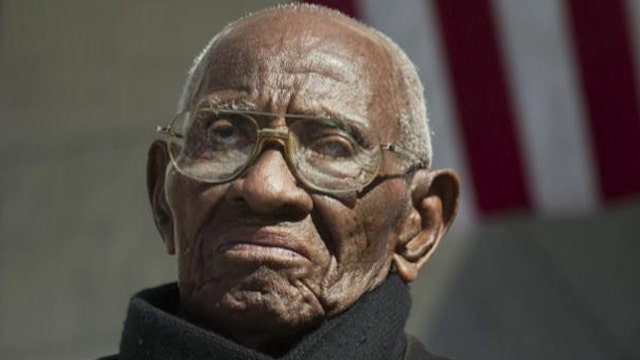 On Veterans Day in 2013, as FOX 7 Austin reported, former President Barack Obama honored Overton in front of thousands in the nation’s capital. “His service on the battlefield was not always matched by the respect that he deserved at home. But this veteran held his head high,” Obama said.

Overton, in later years, could often be seen on the porch of his home, which he built in East Austin in 1945.

His favorite pastime was smoking his 12 daily cigars on his front porch, which friends dubbed his “stage.”

He had lived on his street since returning from war. That street was named in his honor for his 111th birthday last year.

He was grateful to be the nation’s oldest veteran. And he offered this wry advice for living a long life: "Keep living, don’t die.”