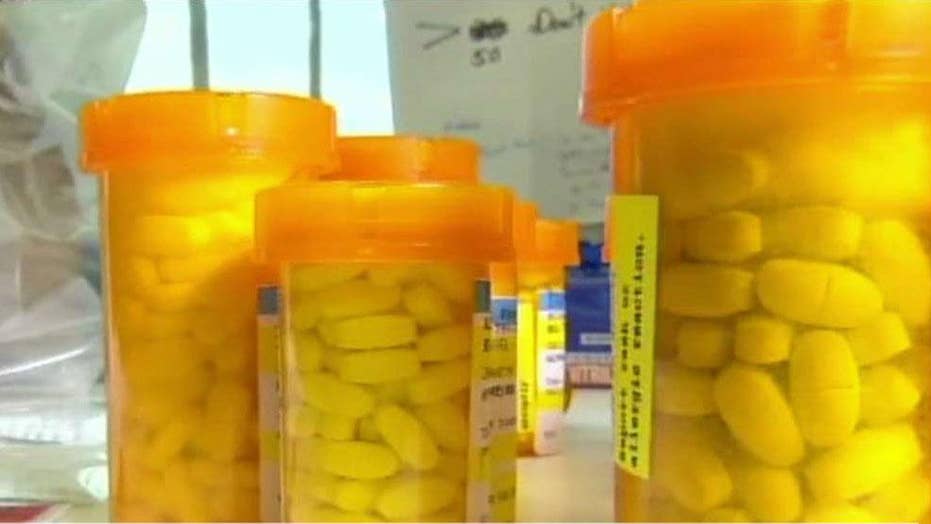 Experts warn US has become too dependent on medicine from China

At least 80 percent of the active ingredients found in all of America's medicines are sourced from abroad, according to FDA statistics; Bryan Llenas reports.

Experts are warning America has become too dependent on China for its medicine -- everything from painkillers, to antibiotics, and even aspirin can all be sourced back to a country the Department of Defense considers an adversary.

The Food and Drug Administration estimates that at least 80 percent of the active ingredients found in all of America's medicines come from abroad – primarily China.

"Imagine if China turned off that spigot," said Rosemary Gibson, author of "China RX: The Risks of America's Dependence on China for Medicine." "China's aim is to become the global pharmacy to the world -- it says that. It wants to disrupt, to dominate, and displace American and other Western companies."

The new national security warning comes as China is threatening to weaponize its dominance in mining rare earth minerals against the United States, in an escalation of the ongoing trade war.

"I have no doubt that they would consider weaponizing their dominance of the pharmaceuticals market if they felt that that would give them an advantage over us strategically," retired Brig. Gen. John Adams told Fox News. Adams is also president of Guardian Six, a defense research consulting firm.

In a worst-case scenario, experts warn, China could withhold supply of medicines like important antibiotics, or degrade the quality of our medicines -- even put lethal contaminants in them. Even when it comes to treating anthrax, China is the largest exporter of the building block to make ciprofloxacin, an anthrax antidote.

The more probable threat from China, however, is that it could make America's prescription drugs more expensive.

"In five to 10 years, when China has a complete chokehold over the United States and its supply of medicine, it's gonna be telling us how much to pay for our medicine," Gibson told Fox News. "We will lose control over how much we pay. We will be the price taker, not the price setter. And that's devastating."

Gibson said China wants to do with medicine what it has done with steel.

"China dumped its steel in the United States at below-market price and it drove out so many factories and jobs and communities were devastated. We have the same story with a lot of our medicines and that happened with penicillin," Gibson said.

US NEEDS TO STAND UP TO CHINA ON TRADE WAR, WILL WIN IF IT DOES: ANDY PUZDER

The last U.S. plant manufacturing the penicillin antibiotic closed in 2004.

China is also positioning itself to dominate the generic drug industry. Generic drugs account for 90 percent of prescriptions filled in the United States. Already, generic versions of high blood pressure meds, anti-depressants, and cancer treatments, including chemotherapy, can be traced back to China. Today, India is the leader in generic drug manufacturing but China provides India with 80 percent of its raw ingredients, according to estimates.

Adding to the national security threat, generic drugs sourced back to China are used by America's military troops and veterans. The problem is health care providers -- including military hospitals -- do not know where all their drugs are sourced because pharmaceutical companies are not required to publicly disclose the source of their active ingredients.

"Knowing the scope of the problem," Adams said. "I think that's the start."

Sen. Sherrod Brown, D-Ohio, said in a statement to Fox News that pharmaceutical companies must be able to trace the origin of their ingredients.

"American consumers have a right to know where the ingredients in their medications are coming from, regardless of whether they are brand or generic," Brown said.

In a 2010 study of pharmaceutical executives, 70 percent of respondents cited China as their top source country for pharmaceutical ingredients. But Gibson said pharmaceutical companies don't want to disclose China as a source of their medicine because Americans are less trustworthy of their products.

The U.S.-China Economic and Security Review Commission will be holding a hearing on this potential threat and vulnerability on July 31.  As for solutions, experts like Gibson and Adams are calling on the U.S. to bring back America's medicinal manufacturing prowess.

"We'd be fools not to understand," Adams said. "They have a goal of having authority or having power over us and economic power is for them part of their national security. We should look at it in much the same way."