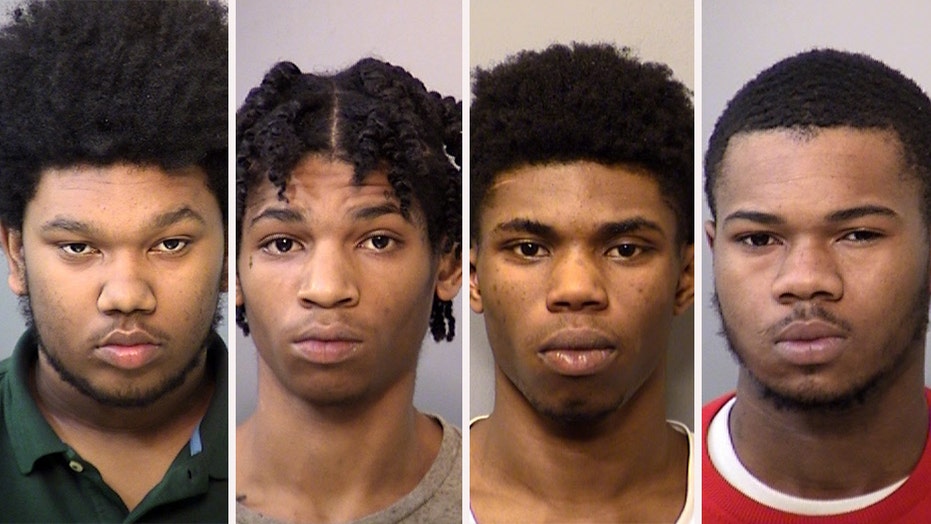 Four teens were charged with murder Wednesday in connection to a fatal shooting that left three young men and a young woman dead in an Indiana apartment earlier this month.

The four male suspects, three of them 19 and one 17-year-old, are facing multiple counts of murder and robbery resulting in serious bodily injury for their alleged role in a Feb. 5 shooting in Indianapolis, Ind.

The victims have been identified as Jalen Roberts, 19; Marcel Wills, 20; Braxton Ford, 21, and Kimari Hunt, 21. It is the city’s first quadruple homicide since 2015.

“I want to applaud the quick action and thoughtful investigatory work of the Indianapolis Metropolitan Police Department [IMPD], as well as the cooperation and collaboration of community members," Mayor Joe Hogsett said in a statement. "While nothing can bring back the four young people whose lives were cut much too short by senseless violence, these charges serve as a meaningful step toward delivering justice to the impacted families."

Marion County Prosecutor Ryan Mears emphasized the importance of community tips in solving the case. A witness noticed a shattered apartment patio door at the scene of the crime and thought it had possibly been shot out. The witness called the police and told them “subjects” were seen fleeing the scene. The caller provided a vehicle description and investigators identified the vehicle on surveillance video, according to the affidavit.

Officers found the four victims inside the ransacked apartment. Drawers were pulled from dressers and an empty safe with a key still inside was found in the closet. Two guns were also missing, the affidavit stated.

After the witness told investigators the vehicle was a gold '88 Oldsmobile, they were able to find the license plate through surveillance footage and police determined the vehicle was registered to Anderson. Another witness who knew the men was able to identify the other four, according to The Indianapolis Star.

When questioned about the fatal night, Anderson initially denied any involvement and said he had been doing laundry at his father’s house at that time. He said his car might have been stolen and brought back without him realizing it. He told investigators he was finished talking.

PENNSYLVANIA MOM, DAUGHTER PLEAD NOT GUILTY IN KILLINGS OF 5 RELATIVES

Later, Anderson asked a detective: “So, you aren't going to come back in here and talk to me?" The detective asked Anderson what he wanted to say, and Anderson admitted to driving the getaway vehicle that night, according to court documents.

Anderson told police he picked up “Dez, Sean and Cameron," and said the teens discussed committing a robbery that night. They contacted someone inside the home to buy marijuana and decided Anderson would be the getaway driver.

Anderson said all three suspects who entered the apartment were armed. He said he heard “a lot of gunshots” before the suspects ran back to the car carrying duffel bags and other stolen items.

"It breaks your heart to see four young people who lost their lives over essentially nothing. And on the other side of the table you have individuals who are now charged with multiple counts of murder," Mears said.

He added: "If they are convicted, we're not talking about decades. We’re talking centuries."