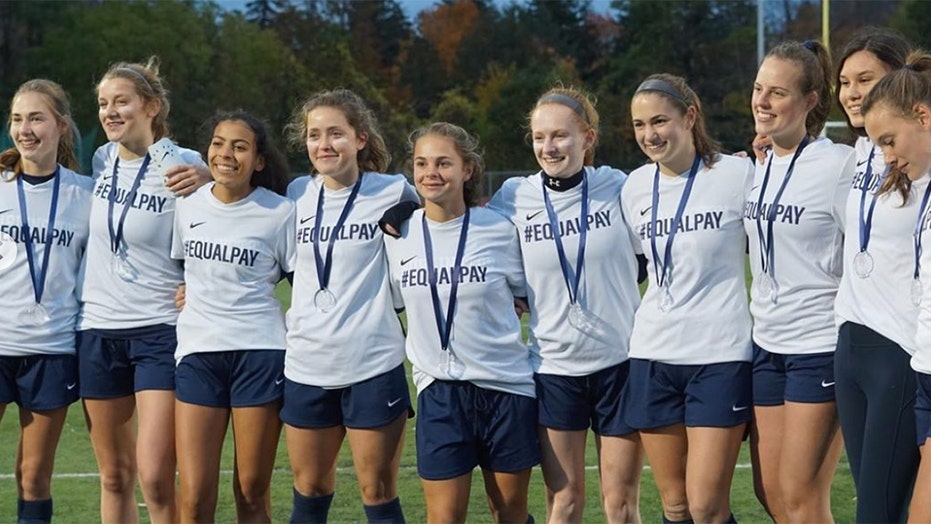 A high school girls soccer team in Vermont has gained national attention after their statement for equal pay during a game last week resulted in several yellow cards.

Team captain Helen Worden hit the back of the net for the Burlington High School’s varsity team, the Seahorses, to break the scoreless stalemate against the South Burlington Wolves on Friday night with just five minutes remaining, the Burlington Free Press reported.

The goal reportedly set off a celebration that saw some players remove their blue uniform tops as they raced to the grandstand to celebrate with their fans.

Underneath the game jerseys were custom-made white jerseys with the slogan “#EqualPay” printed across the front. The jerseys were made as a special fundraising effort to raise money for girls youth sports in the community, the paper reported.

The jerseys were part of a special fund-raising effort for girls youth sports in the community, (Burlington Girls Soccer / Instagram)

However, their celebration in the eventual 1-1 draw came at a small price.

The four players who removed their jerseys were all shown yellow cards for unsportsmanlike conduct, according to the paper. Taking off one’s jersey is reportedly against the league’s bylaws.

The team had received full support from the school and coaching staff when they first came up with the idea to promote equal pay several weeks ago, their coach Jeff Hayes told ABC News’ "Good Morning America" on Sunday.

He said their statement was inspired by the World Cup-winning U.S. Women's team. U.S. captain and FIFA player of the year Megan Rapinoe has been vocal in the fight for equal pay. The U.S. Women’s team sued the U.S. Soccer Federation in March for gender and pay discrimination.

"It goes for everyone – every girl, every woman, the world," player Helen Worden told GMA. "It’s not just about sports.”

The girls’ actions have attracted attention outside their community, including a tweet of admiration from former Women’s star Brandi Chastain, who famously ripped her jersey off revealing her sports bra after scoring the winning penalty during the 1999 Women’s World Cup final against China.

Vermont Democratic Sen. Patrick Leahy and his wife, Marcelle, also tweeted their support of the team’s initiative, wearing the custom jerseys in a photo with the message: “Marcelle and I stand with you!”

Over 700 of the Nike jerseys have been sold so far. Even the ref who issued the yellow cards bought a one after the game, the team told GMA.

The jerseys cost $25, but men and boys were invited to pay 16 percent more to represent the average pay gap in Vermont, according to a website promoting the Free Press.