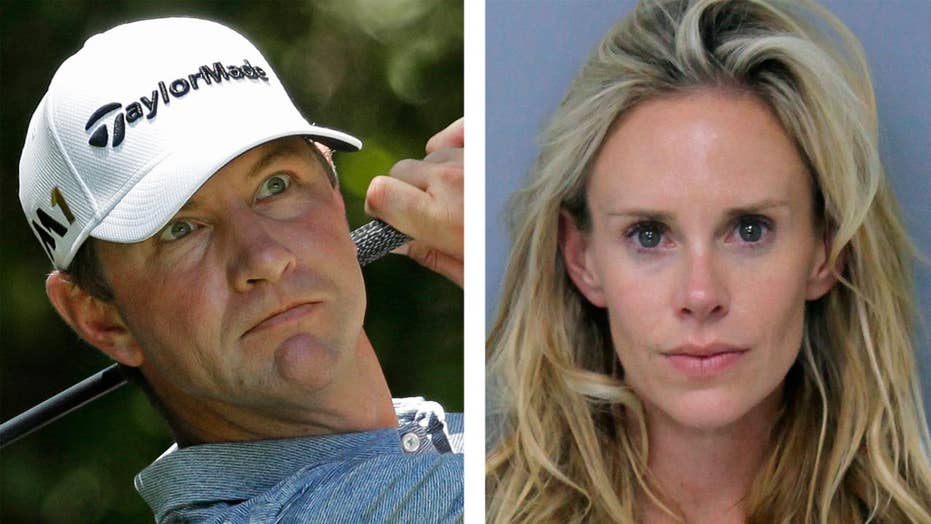 Raw audio: The wife of former U.S. Open champion Lucas Glover claims she was attacked by her mother-in-law.

The wife of former U.S. Open champion Lucas Glover, arrested on a domestic violence charge, made the first call to 911 and claimed she was attacked by her mother-in-law, according to a tape of the call released Wednesday.

Glover's wife, Krista, told the 911 operator she had been attacked by her mother-in-law, who had locked herself in her room. When asked how she was attacked, Glover’s wife hung up.

Glover answered when the St. John’s Sheriff’s Office in Florida called back and said his wife was lying.

“Yeah, hi, I think we got our lines crossed here. This is the husband, the sane one of the bunch,” Glover says in a calm voice, acknowledging his bleeding mother. “My wife has called you. ... Now she’s trying to blame it on my mother, which is not the case at all. ... My wife has gone crazy.”

When asked if the sheriff’s office should send a rescue squad unit, Glover politely says that won’t be necessary.

The operator then asks to speak to Glover’s wife.

“No, you cannot,” Glover says. “She’s in the house with my daughter. And when deputies get here, they need to talk to the male — that would be me — because these other two are out of their heads at the moment.”

When the operator points out that his wife is the person who called, Glover replies: “Well, she’s going to lie to you. That’s what I’m telling you. That’s why I answered the phone. She’s telling lies.”

Krista Glover was arrested Saturday night and taken to the St. John’s County jail. She was released Sunday on a $2,500 bond and faces misdemeanor charges of domestic-violence battery and resisting arrest without violence. She has a May 31 court date.

Lucas told deputies how “when he plays a bad round of golf, Krista proceeds to start an altercation with him and telling him how he is a loser and a p---y, how he needs to fire everyone, and how he’d better win or her and the kids would leave him and he would never see the kids again,” the arrest report read, according to The Daily Mail.

Earlier in the day, Glover shot 78 and missed the 54-hole cut at The Players Championship.

Glover also told the deputy his wife had been drinking, according to the report.

According to the report, Glover said his wife began the altercation when he was on the back porch and then began attacking his mother, Hershey Glover, when she tried to intervene. The deputy said in the report she was arrested based on injuries on Lucas Glover’s arm and his verbal statements.

The deputy also observed cuts and bleeding on both arms of Hershey Glover. According to the report, she refused to pursue a battery charge against Krista Glover.

Deputies said she resisted arrest and damaged a patrol car before being taken to jail, Fox 30 reported.

“Wait till the tour (PGA) hears about this,” she yelled, according to the report cited in The Mail. “You will lose your job. This is why cops get shot in the face. Wait till I talk with the judge, you will be f---ing fired over this.”

Glover confirmed on Twitter that there had been an altercation.

“Everyone is fine,” Glover said. “Regrettably, although Krista was charged, we are comfortable that the judicial system is able to address what actually happened and Krista will be cleared in this private matter.”

Glover and his wife have two children, a daughter who turned 5 on Monday and a 2-year-old son. Glover has three PGA Tour victories, including the 2009 U.S. Open at Bethpage Black. He also has played in the Presidents Cup twice. Glover earned nearly $2 million last season and finished No. 43 in the FedEx Cup. He is currently No. 104 in the world ranking.

“We are aware of the situation and Lucas informed us of his statement, which has since been posted to his Twitter account,” the PGA Tour said in a statement. “Of course, we are here to provide support to Lucas and his family if needed; however, we are also respecting their request for privacy during this time.”