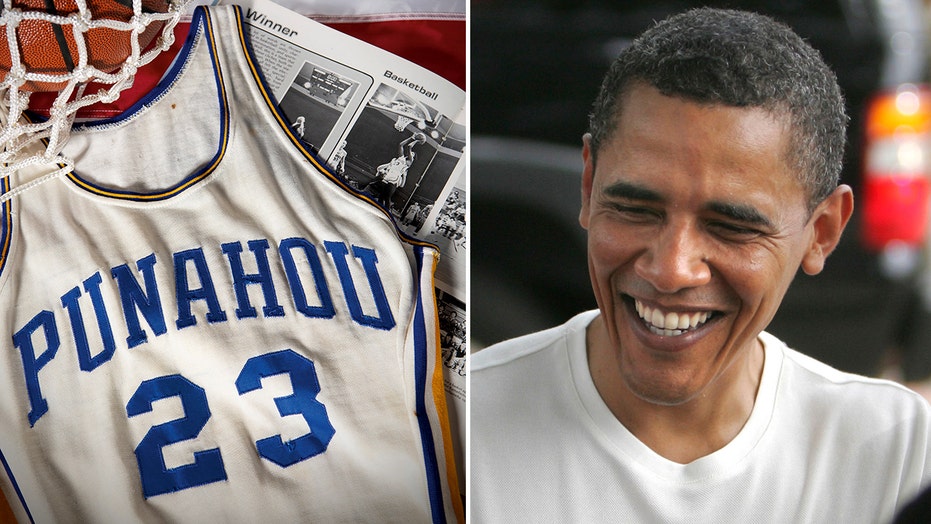 A collector of American and sports artifacts, who didn’t wish to be identified, placed the highest bid for the 44th president's 1978-79 Punahou School jersey, an article the Heritage Auctions listing called possibly “the most important basketball jersey that exists” given Obama's later status.

MORE THAN 65,000 SIGN ONLINE PETITION TO RENAME STREET OUTSIDE TRUMP TOWER AFTER OBAMA

Peter Noble, a former schoolmate three years behind Obama, put the jersey -- one part political, one part sports memento -- up for auction. Noble, 55, who lived in Seattle, had rescued the number-23 jersey from the trash when the school got new varsity jerseys. The relic had been sitting in his closet ever since.

The jersey’s authenticity was checked using Noble’s yearbook, where Obama was seen in a photograph wearing the number 23. Heritage Auctions said it found that all the details and imperfections matched.

Obama’s love of basketball was well documented during his tenure in the White House. He told TNT’s Marv Albert in a 2010 interview that he played two to three times a week.

Decades earlier, he said the sport gave him a sense of purpose when he was growing up in Honolulu.

“Basketball was a refuge, a place where I made a lot of my closest friends and picked up a lot of my sense of competition and fair play,” he told Sports Illustrated in a 2008 interview. “It was very important to me all the way through my teenage years.”

Noble said a portion of the sale will go to the school.