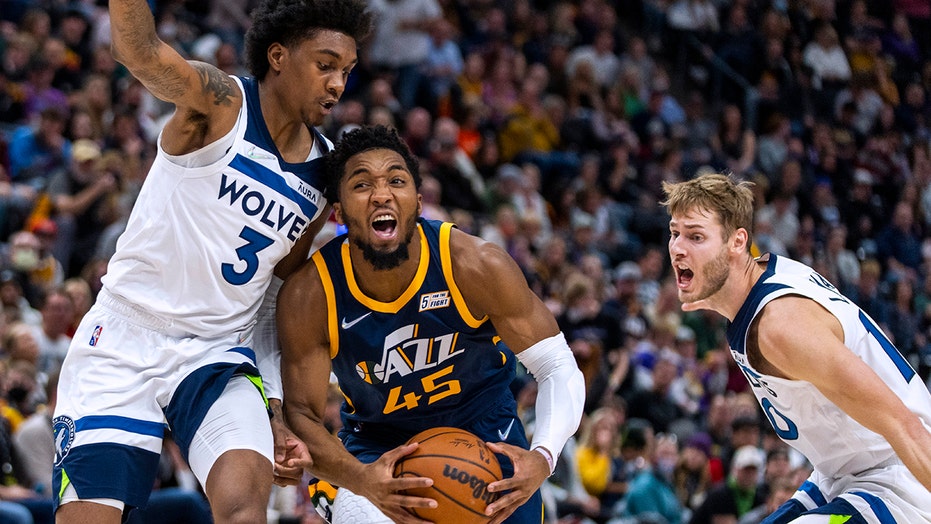 "We executed on both ends; we got stops," Mitchell said of pulling away at the end. "We executed really well on offense and it’s something we can capitalize on and continue to build on."

Rudy Gobert had 20 points and 17 rebounds, Bojan Bogdanovic added 18 points and Mike Conley scored 17 points as the Jazz won for the 10th time in 12 games.

"There have been times when a team is really aggressive against us defensively, that we haven’t responded on a level that I think we want to see," Utah Coach Quin Snyder said. "Tonight, our guys all responded."

"I haven’t seen guys waver with anything in terms of coming ready to play and having confidence in each other. Our guys know we have a lot of great players, a lot of great talent in our locker room, no matter who plays. I think that showed tonight," Jake Layman said.

Malik Beasley scored a season-high 33 points and D’Angelo Russell had 19 and matched a career high with 14 assists for Minnesota.

"Everybody came in and played with a lot of heart and generated a lot of good shots. Some went in, some didn’t. We fought back whenever we got down, so very pleased with the effort," Minnesota coach Chris Finch said.

Utah’s usual stingy defense was missing much of the game. Gobert challenged shots at the basket and had four blocks, but the Timberwolves were a step ahead of the Jazz rotations throughout.

Minnesota made 17 3s and shot 38% from long range, despite going cold in the fourth quarter.

At the other end, the Jazz were able to get whatever they wanted with a bevy of lobs, drives to the basket and wide-open 3-pointers. Utah shot 53% from the field.

"When they were trying to run us off the line and things like that, we were really good about making the extra pass and playing with the pass," Snyder said.

Bogdanovic hit four 3s in the third quarter to help the Jazz push the lead to 15 points once, and 14 points on another occasion. The Timberwolves kept battling back.

Timberwolves had won four in a row before the coronavirus started taking its toll. They were short-handed in a 114-105 loss to Dallas on Tuesday.

The Jazz have lost four home games by a total of 10 points to teams with lesser records over the last month. So, when Beasley made a 27-foot jumper to pull Minnesota within seven points with 5:30 left, it seemed like history repeating.

"When there’s a team that has nothing to lose and a lot of young guys that want to prove themselves, we’ve lost some of these games," Gobert said.

But Utah relied on its experience. Gobert and Mitchell made tough shots in the lane, and Conley hit a pair of 3s to make it 122-109 with two minutes remaining.

"For us, it was just about being poised and calm … just taking our time offensively and defensively, knowing that we’re going to rely on what we do and try to be great at what we do to close out games," Conley said.

Gobert was famously the first publicly identified sports figure to test positive for COVID-19 just before tipoff at Oklahoma City on March 11, 2020.

With the latest wave this season, the Jazz are one of the few teams to avoid losing players to the virus.

"I think we’re all kind of prepared for it to creep in because it’s everywhere. And right now, it’s on all of us to be responsible and try to practice our social distancing, and we’ve got new requirements from the league in order to help with that around our locker rooms and in public. So just trying to try to wear a mask and do our best to not catch it," Conley said.

Gobert agreed but wants to keep the focus on basketball.

"We don’t want to be in a state of fear … but keep doing all the things that we can do to reduce the risks. Sometimes it seems inevitable as we play in front of thousands of fans every night; we get on planes and we get on buses."

Jaden McDaniels, who had 16 points for Minnesota, is anxious before every contest.

Timberwolves: With 10:36 to play, Naz Reid caught a Gobert elbow to the head and went down in a heap. An official review resulted in a flagrant 1 foul on Gobert. … Minnesota scored 21 points on Utah’s 15 turnovers. … In his first start, Layman reached season-high marks of 13 points and seven rebounds.

Jazz: Joe Ingles got a technical after he took exception to the way Layman fouled him in the second quarter. … Biggest cheer of the night came with 3:22 left until halftime as Jordan Clarkson dunked in traffic to beat the shot clock after he missed his first six shots. He was mobbed by his teammates. … Ingles had 16 points and a season-high three steals.