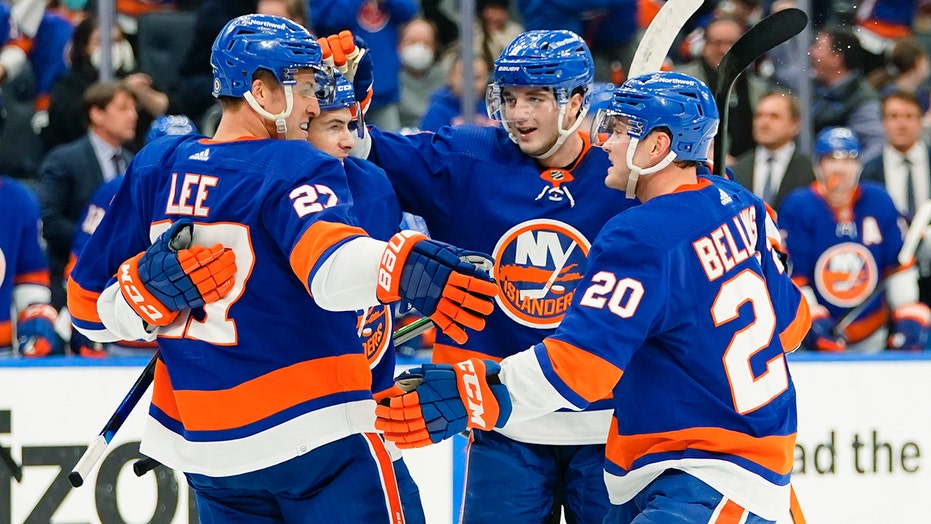 Kieffer Bellows and Anders Lee scored in the second period, Semyon Varlamov made 36 saves and the New York Islanders beat the Buffalo Sabres 4-1 on Thursday night for their third victory in four home games.

Mathew Barzal added a goal and two assists as the Islanders improved to 3-5-3 at UBS Arena after an 0-5-2 start in their new ornate home.

Bellows made a dipsy-doodle move to elude a Sabres defender before shooting the puck past Buffalo netminder Malcolm Subban at 6:45 of the middle period to snap a 1-all tie. It was Bellows' third goal this season, with an assist going to defenseman Andy Greene.

"I am feeling confident in my game right now, patient with the puck with that extra split-second to make decisions,'' said the 23-year-old Bellows, a first-round draft pick by the Islanders in 2016. "I put it on net and it went in."

Barzal, who opened the scoring in the first, and Bellows assisted.

Noah Dobson made it 4-1 with his fourth goal at 11:43 of the third. Barzal added his second assist of the night, as did Josh Bailey.

The game was the Islanders’ first since Dec. 19, when they lost to the Vegas Golden Knights 4-3 in a shootout at home. New York had its next four games postponed because of COVID-19 issues, including home games against Montreal, Washington and Detroit and a road game this past Monday at Buffalo.

"I thought we were pretty decent for the most part,'' Islanders coach Barry Trotz said. "Kieffer’s goal was huge and I like the way our special teams responded."

Varlamov, who earned chants of "Varly! Varly!" late in the game, won his second straight game after an 0-5-1 start this season.

"We had a long break and a couple of good practices,'' Varlamov said. "I spent a lot of time with my family, tried not to think about hockey and relax. That was really helpful. I felt great today, fresh."

Varlamov's previous win came in a 3-1 victory over Boston at home on Dec. 16.

Barzal opened the scoring at 12:35 of the first, beating Subban for his sixth goal with assists to Bailey and Dobson. It was the first goal since Dec. 2 for Barzal, who missed three games in COVID-19 protocol this month. He leads the Islanders with 20 points.

"I wanted to start shooting, especially on the power play," Barzal said. "Early on, I wanted to make them respect me out there. We kept it going through the full 60."

Former Islander Kyle Okposo tied it for the Sabres with a power-play goal at the 19-minute mark of the opening period. The 33-year-old Okposo spent nine seasons with New York before signing a seven-year, $42 million free-agent contract with Buffalo in July 2016.

The Sabres were without 10 players — including top scorers Jeff Skinner and Dylan Cozens — plus head coach Don Granato because of a combination of COVID-19 protocol and injuries.

"We did OK in spurts. I don’t think we had everyone spinning the wheel tonight," Okposo said. "We have a ton of new faces. It almost felt like a preseason game with so many new guys in the lineup."

The 28-year-old Subban, acquired from Chicago this month, made 28 saves.

The Islanders entered tied with Boston having played a league-fewest 26 games.

The Sabres were coming off a 4-3 loss to the Devils on Wednesday night at home, Buffalo’s first game back since a 3-2 overtime loss at Pittsburgh on Dec. 17. The Sabres fell to 10-17-5.

NOTES: The Sabres and Islanders are also scheduled to play in Buffalo on April 26. … The Islanders were without forwards Brock Nelson, Oliver Wahlstrom and Anthony Beauvillier plus defenseman Sebastian Aho because they are in COVID-19 protocol. ... The Islanders also were without injured forward Kyle Palmieri and defenseman Ryan Pulock. ... New York scratched Bardreau and Hutton. ... The Sabres scratched defensemen Robert Hagg, Colin Miller and Jacob Bryson.