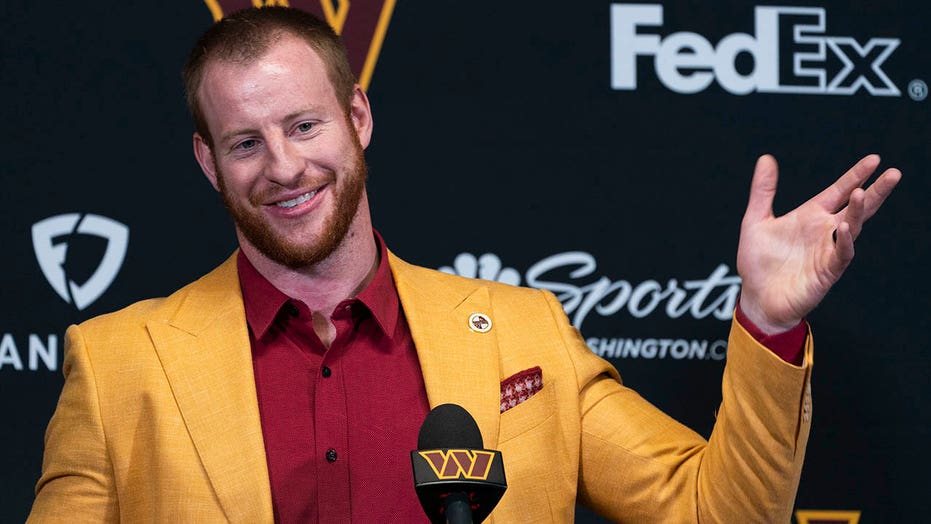 With Carson Wentz the new quarterback of the Washington Commanders — a deal that was made with the Indianapolis Colts earlier this month — standout running back Jonathan Taylor will be taking handoffs from a third, new starting quarterback in as many seasons in Indianapolis this fall.

While the Colts haven’t named or found their starting guy just yet, one thing is certain — it won’t be Wentz, who was traded to Washington for two third-round draft picks.

Taylor, who was selected by the Colts with the No. 41 overall pick in the 2020 NFL Draft, had a record-setting season and said he’ll definitely miss the veteran QB.

"I’m definitely sad to see Carson go," Taylor said. "He was amazing in the locker room and on the field as well. You look at some of the plays he made on the field, but off the field he was an amazing guy always. He made sure to get in contact with everyone on the team."

Taylor, 23, was selected as the 63rd Bert Bell Professional Player of the Year Award, an award voted on by NFL owners, NFL head and personnel coaches, media members and the Maxwell Football Club.

In just his second season in which he led the NFL in rushing yards (1,811), rushing attempts (338) and rushing touchdowns (18) on an average of 5.5 yards per carry, Taylor joins former quarterbacks Peyton Manning and Johnny Unitas as the only other Colts player to earn the award.

While Taylor will look to find success in his third season in the league, much of that relies on the Colts quarterback situation and an upgrade beyond the current roster — the team does not currently have a quarterback on the roster that has thrown an NFL pass.

The Colts drafted former Texas quarterback Sam Ehlinger with the No. 218 overall pick in the 2021 NFL Draft. The 23-year-old rookie spent last season as a backup QB to Wentz, although he seems to be staying ready to step in at a minute’s notice.

The team also has former FIU quarterback James Morgan on the roster. The 25-year-old was drafted by the New York Jets with the No. 125 pick in the 2020 NFL Draft and, after spending time on the practice squads of a handful of teams, was signed by Indianapolis in December 2021.