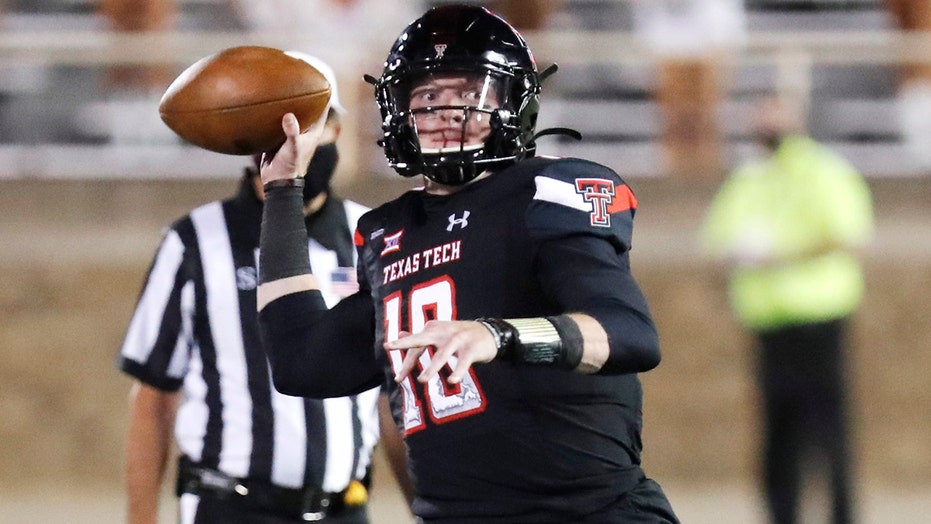 Alan Bowman threw for 430 yards and two touchdowns and Texas Tech stopped FCS team Houston Baptist on a 2-point conversion attempt late in the fourth quarter, hanging on for a 35-33 victory Saturday night.

SaRodorick Thompson ran for two scores in the opener of the pandemic-shortened season for the Red Raiders in front of a socially distanced crowd of 11,157, about 18% of the capacity of 60,454 at AT&T Jones Stadium.

Bailey Zappe threw for 567 yards and four touchdowns in the first game for Houston Baptist (0-2) against a Power 5 opponent a week after finishing with 480 yards passing and three scores in a 57-31 loss to North Texas.

Zappe's final TD pass to Jerreth Sterns pulled the Huskies within two with 3:23 remaining, but his pass to Ben Ratzlaff along the sideline on the 2-point play was wide and high. The Red Raiders then ran out the clock.

“We had the right play call,” Zappe said. “It’s just on us players to execute. If I put a better ball on Ben on that 2-point conversion, we get it. It’s not on anybody but me.”

Josh Sterns had 209 yards receiving and two touchdowns, including a 75-yarder to get Houston Baptist within eight early in the fourth quarter. Jerreth Sterns had 12 catches for 130 yards, and Ratzlaff had 105 yards.

The Huskies set up their chance to tie by stopping Bowman on a quarterback sneak on fourth-and-1 from the Houston Baptist 4-yard line. Coach Matt Wells decided against a short field goal that would have put Texas Tech up 11.

Bowman spread the ball around, with five receivers getting at least four catches and 46 yards. KeSean Carter, who led Texas Tech with 86 yards receiving, and Erik Ezukanma had receiving TDs.

Houston Baptist: Even though the fall season is a short one for the Huskies, both showings against FBS programs were solid. And Zappe, a senior, was 30 of 49 while showing again why he's one of the best passers in the lower division.

“Your heart hurts for our kids that didn’t get a win,” coach Vic Shealy said. “These situations are what you dream of. We didn’t it done, but I’m hopeful and believe that this will only strengthen us as a team. And as we finish up this season and go to work preparing for 2021, we’ll be better for being in these environments.”

Texas Tech: It wasn't a great opener with Wells trying to show progress in his second season. But Wells was worried about how ready the Red Raiders would be in a pandemic-altered offseason. He ended up having reasons to worry.

“Might not have looked like we wanted it to look,” Wells said. “Certainly a lot to clean up. Had some stuff where we just got beat.”

Houston Baptist: The Huskies are supposed to have their fall finale in two weeks at Louisiana Tech after the Southland Conference postponed football season. But Louisiana Tech's game against Baylor this weekend was called off because of COVID-19 issues on the campus in Ruston, Louisiana. It wasn't clear when Louisiana Tech of Conference USA would play again, but Shealy said indications were the game would happen.

Texas Tech: The Red Raiders are scheduled to open Big 12 play at home against No. 14 Texas in two weeks.