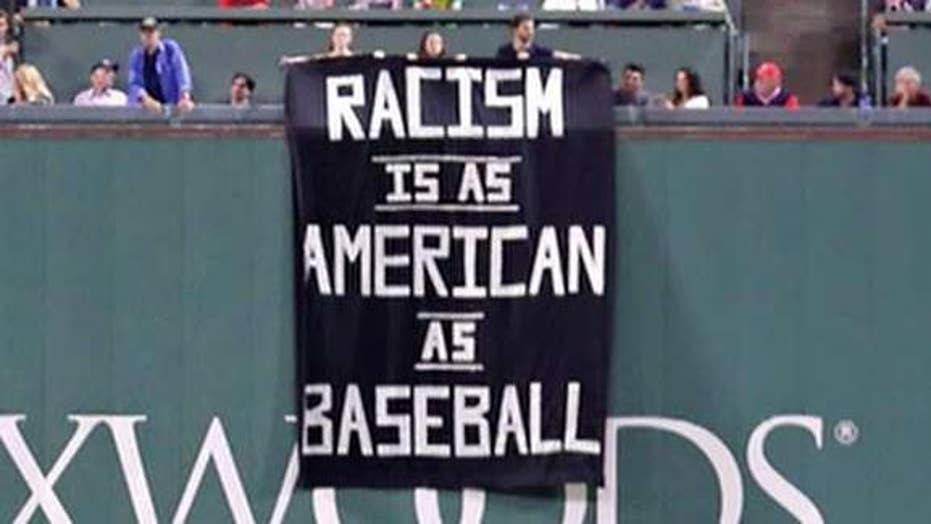 Banner read 'Racism is as American as baseball', protesters were escorted out of the game

Four Boston Red Sox fans were ejected from Wednesday’s game after draping a sign over the Green Monster that read: “Racism is as American as Baseball.”

The sign was displayed for about one at-bat during the fourth inning until the umpires asked for it to be taken down because it was in fair territory.

A banner is unfurled over the left field wall during the fourth inning of a baseball game between the Boston Red Sox and the Oakland Athletics. (AP)

There was a spattering of boos from the crowd as Red Sox security forced them to remove it and escorted the fans from their seats.

A spokesperson for the Red Sox said the four people were escorted from the park and that one of them said they were inspired by Black Lives Matter.

The fans told the Washington Post they put up the sign to bring attention to white supremacy.

“We are a group of white anti-racist protestors,” the fans told The Washington Post. “We want to remind everyone that just as baseball is fundamental to American culture and history, so too is racism. White people need to wake up to this reality before white supremacy can truly be dismantled. We urge anyone who is interested in learning more or taking action to contact their local racial justice organization.”

One of the fans said there was a fifth person with them who was “doing documentation across the stadium.”

One of the members of the group, who did not wish to be named, said they were not “not associated with any particular organization, although all of us do work as organizers in various Boston groups that combat white supremacy and racism.”

“We are responding to a long history of racism and white supremacy in the United States that continues to pervade every aspect of American culture today,” the protester told The Washington Post. “We deliberately chose a platform in an attempt to reach as many people as possible.”

This is not the first time the Red Sox have been the center of attention in regards to racism at the ballpark.

Orioles center fielder Adam Jones said after a game on May 1 he was a victim of racial slurs and had peanuts thrown at him during the game.

The next day, Jones received a personal apology from Boston team president Sam Kennedy on behalf of the club. When he stepped up for his first at-bat of the game, he was also given extended applause from the Fenway crowd.

Team owner John Henry said he also planned on asking the city to rename Yawkey Way, which was named after Henry’s predecessor Tom Yawkey, in an effort to ease the ballclub’s history of racial intolerance. The announcement followed the Charlottesville deadly protests where a woman was killed after a car drove into a crowd protesting white supremacists.

Baltimore's Adam Jones said he was a victim of racial slurs when he played at Fenway Park in May. (AP)

During Yawkey’s tenure, the team was the last in Major League Baseball to integrate, in 1959.