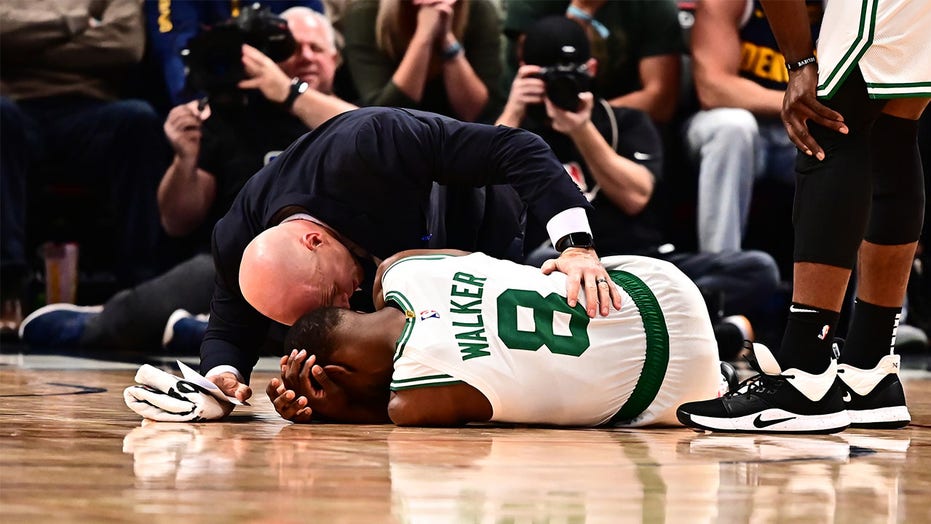 Boston Celtics point guard Kemba Walker is recovering from “concussion-like symptoms” after a scary head-on collision with a teammate left him being carried off on a stretcher halfway through Friday night’s game against the Denver Nuggets.

Walker was trying to control a pass he deflected with just over three minutes left in the second quarter when he appeared to lose balance and run, with his head down, straight in the abdomen of Semi Ojeleye.

Walker was seen falling to the ground with his head and shoulders dropped.

Medical personnel rushed over and placed a brace around his neck in order to stabilize the area. He was strapped to a backboard before being placed onto a gurney and wheeled off the court.

Onlookers feared that Walker might have sustained a significant neck injury based on the way he collided with Ojeleye but the Celtics tweeted out shortly after that he has been diagnosed with “concussion-like symptoms.”

He was transported to a Denver hospital where all of his scans and tests came back with a “positive result,” head coach Brad Stevens said.

The team took to twitter to update the situation early Saturday morning, saying that Walker had been released from the hospital and was set to rejoin his team as they head back to Boston.

Kemba Walker #8 of the Boston Celtics is injured against the Denver Nuggets in the first half at Pepsi Center on November 22, 2019 in Denver, Colorado.(Photo by Jamie Schwaberow/Getty Images)

Walker entered the game averaging a team-leading 22.6 points, 4.9 rebounds, and 4.8 assists in his first season with Boston. The Nuggets went on to beat the Celtics 96-92.

Earlier this month, the Celtics lost Gordon Hayward to a fractured left hand. He suffered the injury when he collided with LaMarcus Aldridge in a Nov. 9 game against San Antonio.