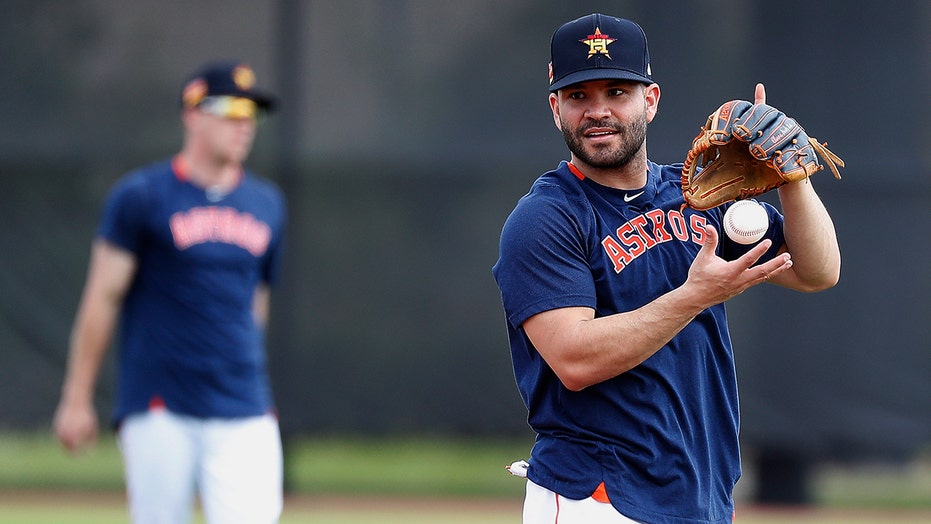 Houston Astros players received a cold welcome during batting practice at their spring training facility in Florida on Monday.

One fan filmed himself banging a trash can while Jose Altuve, Alex Bregman and Carlos Correa were about to get their swings in in West Palm Beach.

DARVISH: ASTROS SHOULD BE STRIPPED OF '17 WORLD SERIES TITLE

Another person yelled “cheater” at Altuve as he was signing autographs.

Astros players have drawn the ire of just about everyone in baseball after it was revealed they cheated to gain an advantage during their 2017 World Series-winning season.

MANFRED: NO TOLERANCE FOR BEANBALLS IN WAKE OF ASTROS' SCAM

Houston set up a video camera in center field to relay opposing players’ signs to a television in the clubhouse. Astros personnel would then bang on a trash can to alert batters to the pitch the opposing player was going to throw. MLB Commissioner Rob Manfred said the cheating was widespread.

Players were granted immunity in MLB’s investigation, which is part of the reason no one was punished for cheating. A.J. Hinch, Jeff Luhnow, Alex Cora and Carlos Beltran all lost their jobs over the scandal. Hinch, the former Astros manager, and Luhnow, the former Astros general manager were suspended from baseball for a year. Cora and Beltran both left their managerial roles.

Astros players, such as Altuve, Bregman and Correa, have been accused of cheating even after 2017. Altuve was accused of wearing an electronic buzzer that communicated the pitches to him. Houston has vehemently denied those allegations.