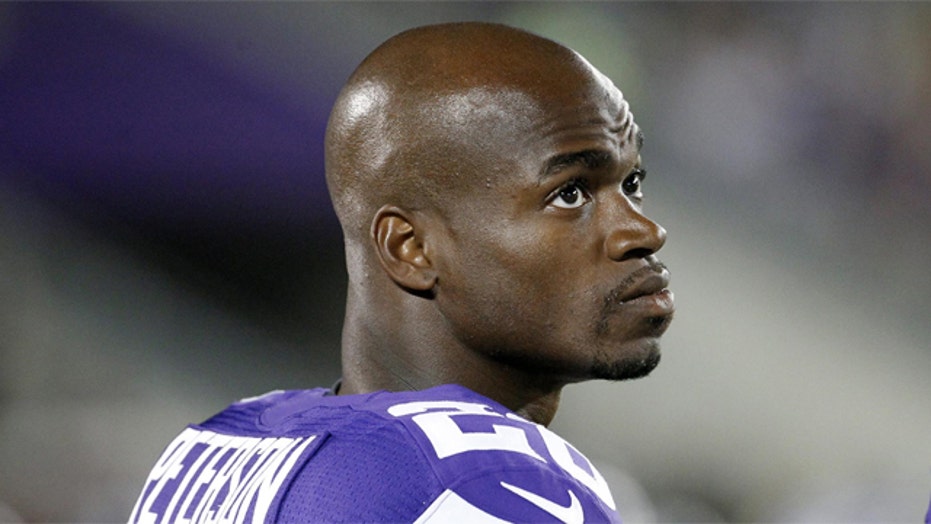 Vikings running back Adrian Peterson turns himself in

Star Minnesota Vikings running back Adrian Peterson was taken into custody and released on bond in Texas early Saturday morning following his indictment on a charge of child abuse for allegedly using a branch to spank his son.

A listing on the Montgomery County website said Peterson, 28, was confined at 1:06 a.m. and released less than a half hour later after posting $15,000 bond.

Peterson's attorney, Rusty Hardin, said Friday that the charge accuses Peterson of using a switch to spank one of his sons. Hardin said Peterson didn't mean to hurt the boy, whose injuries and age were not disclosed.

"Adrian is a loving father who used his judgment as a parent to discipline his son. He used the same kind of discipline with his child that he experienced as a child growing up in East Texas," Hardin said.

"Adrian has never hidden from what happened. He has cooperated fully with authorities and voluntarily testified before the grand jury for several hours," he said. "Adrian will address the charges with the same respect and responsiveness he has brought to this inquiry from its beginning. It is important to remember that Adrian never intended to harm his son and deeply regrets the unintentional injury."

The Vikings, about an hour after issuing a statement acknowledging the case, said Peterson would be on the inactive list Sunday for their home opener against New England. Houston police and authorities in Montgomery and Harris counties declined comment.

Peterson will have to surrender to authorities, but there is no timeline for when he will appear in Texas, Hardin said.

"We are just obligated to try to get it done as soon as possible, which we intend to honor," he said.

Peterson is in his eighth season, all of them with the Vikings. Widely considered the best running back in the league, he has rushed for 10,190 yards and 86 touchdowns in his career.

The allegations against one of the NFL's biggest stars came during a week in which the NFL has been under heavy criticism for the way it handled a domestic violence case involving former Baltimore Ravens running back Ray Rice and his then-fiancee. Commissioner Roger Goodell initially suspended Rice for two games, but he was suspended indefinitely this week after a longer version of security video surfaced showing Rice punching her in the face.

Critics are also closely watching how the league proceeds in the cases of Carolina Panthers defensive end Greg Hardy and Ray McDonald of the San Francisco 49ers, both still playing with domestic abuse cases pending. Hardy was convicted July 15 of assaulting a woman and communicating threats, but is appealing. San Jose police are still investigating an Aug. 31 incident involving McDonald.

The NFL didn't immediately respond to a request for comment on Peterson's situation.

Peterson did not practice on Thursday because of what coach Mike Zimmer called a "veteran day," allowing experienced players to rest, but Peterson was at the team facility that day and spoke to reporters about the upcoming game against the Patriots.

He returned to practice on Friday and was in the locker room following the workout with the rest of his teammates for lunch. Shortly thereafter, Peterson posted a message on his Twitter account that said in part: "It's your season! Weapons may form but won't prosper! God has you covered don't stress or worry!"

A man who identified himself as Peterson's uncle, Chris Peterson, answered the door at the running back's home in Eden Prairie, Minnesota, and said Peterson wasn't there and that the family had no comment.

Peterson grew up in little Palestine, Texas. When he was 7, his 8-year-old brother Brian was riding his bicycle when he was killed by a drunk driver. Years later, his half-brother, Chris Paris, was shot and killed the night before Peterson worked out for scouts and coaches at the NFL combine.

His mother, Bonita Jackson, was a former Olympic sprinting hopeful and his father, Nelson Peterson, spent eight years behind bars for laundering drug money yet still managed to be a positive influence on his son's life.

"I told him to always introduce himself, look a man in the eye, give him a firm handshake and say, 'I'm Adrian Peterson,'" Nelson said at the Pro Bowl in 2009. "Respect others. That will take you a long way in life."

Peterson rushed for 2,960 yards and 32 touchdowns during his senior season at Palestine High School, then racked up an NCAA freshman record 1,925 yards in his freshman season at Oklahoma in 2004. He hasn't looked back, even with some bumps in the road.

Last season, not long after finding out that he had a 2-year-old son living in South Dakota, Peterson rushed to the hospital after authorities said the boy was brutally beaten by his mother's boyfriend. The boy died, and a 28-year-old man is scheduled to go on trial next month on second-degree murder charges in the case.

Hardin, the defense attorney, is a familiar name in sports circles. He successfully defended Roger Clemens in his recent perjury trial over the alleged use of performance-enhancing drugs and two years ago represented Los Angeles Lakers forward Jordan Hill, who was sentenced to one year of probation after pleading no contest to assaulting his former girlfriend.

He has worked with Peterson before, too: In 2012, he said Peterson was the victim after the player was charged with misdemeanor resisting arrest following an incident at a Houston nightclub.