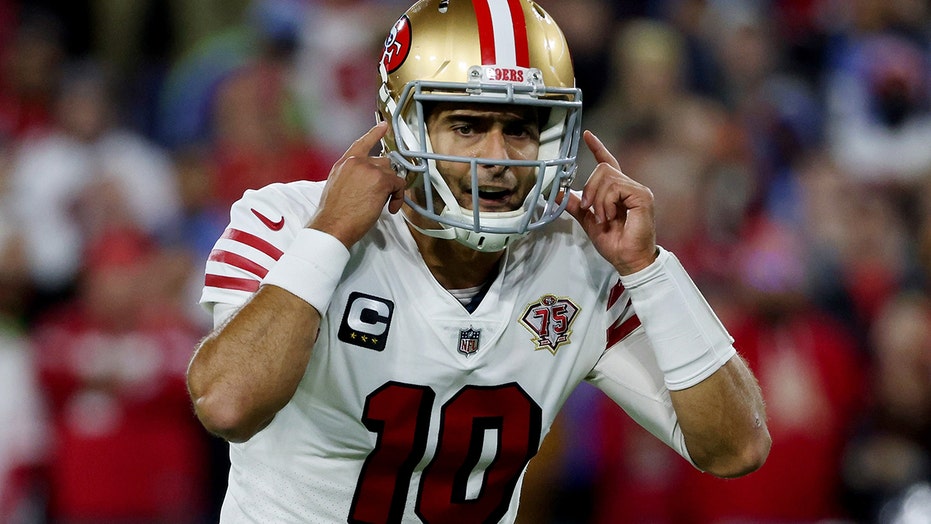 San Francisco 49ers General Manager John Lynch looks on during pregame before a game against the Tennessee Titans at Nissan Stadium on Dec. 23, 2021, in Nashville. (Wesley Hitt/Getty Images)

"Apparently - while in Christmas Eve Mass w my Family - I accidentally and unknowingly Liked a Tweet. Never intended to and remain a huge believer in Jimmy. Merry Christmas to everyone," Lynch wrote.

Garoppolo’s starting role with San Francisco has been in question ever since the team decided to trade up and select Trey Lance with the No. 3 overall pick.

COWBOYS' AMARI COOPER HOPING TO GET CHANCE TO JOLT OFFENSE: 'WE’RE NOT REALLY AS EXPLOSIVE AS WE SHOULD BE'

Jimmy Garoppolo (10) of the San Francisco 49ers looks for an open teammate to pass to in the first quarter of a game against the Tennessee Titans at Nissan Stadium Dec. 23, 2021, in Nashville. (Dylan Buell/Getty Images)

Over the course of the season, Lance has gotten time on the field in certain packages and while Garoppolo was injured. Lance hasn’t thrown a pass since Week 5 but made an appearance for five snaps Week 11.

Garoppolo has gotten the 49ers in the hunt for a playoff spot, throwing for 3,494 yards and 19 touchdown passes against 10 interceptions.

Jimmy Garoppolo of the San Francisco 49ers calls out instructions in the first quarter against the Tennessee Titans at Nissan Stadium Dec. 23, 2021, in Nashville. (Dylan Buell/Getty Images)

San Francisco lost by three points to the Titans Thursday. The Niners have two games left the Houston Texans and Los Angeles Rams.