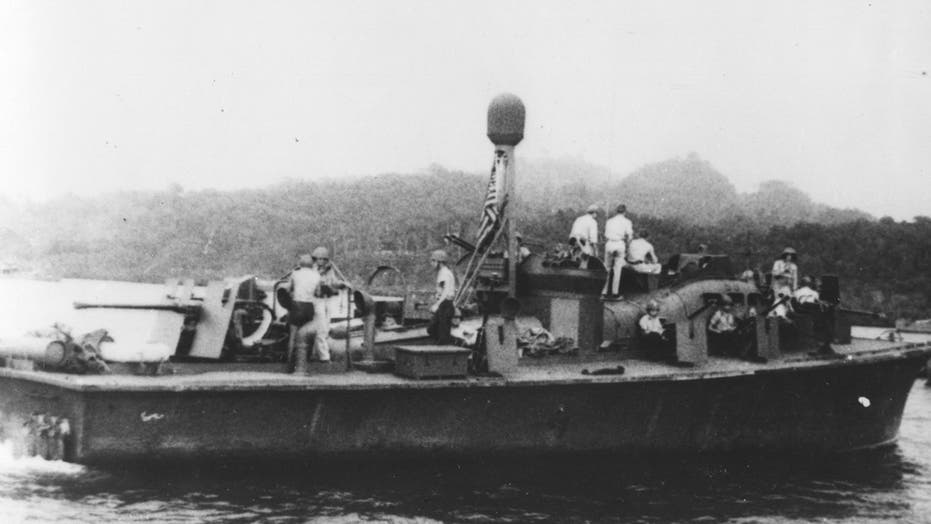 The wreck of a high-speed patrol boat commanded by John F. Kennedy during World War II has been discovered in New York’s Harlem River.

Remnants of PT-59 have been dredged up from the Harlem River as part of a Metropolitan Transportation Authority (MTA) project to build a sea wall to prevent flooding in a Manhattan train yard, according to the New York Times.

Rumors have swirled around the boat’s possible location in the Harlem River for a number of years.

Sold off after the war, PT-59 was used as a charter boat for anglers and later, as a houseboat on the Harlem River, the Times reports. It was abandoned in the mid-1970s and eventually sank.

View of motor torpedo boat PT 59 during its World War II service in the Solomon Islands, early to mid 1940s. The boat was famously commanded by the-future US President John F. Kennedy as his second command after PT 109. (Photo by Photoquest/Getty Images)

PT-109 famously sank in the Solomon Islands following a collision with a Japanese destroyer in the early hours of Aug. 2, 1943. The future president was awarded The Navy and Marine Corps Medal for his role in saving the surviving PT-109 crewmembers.

Less well known, however, is his subsequent command, PT-59, which he skippered from October 1943 until November 1944. During that time, he helped evacuate Marines who were surrounded by Japanese forces on Choiseul Island. “Some of these Marines were wounded and one of them died in the skipper’s bunk aboard PT-59 that night,” explains the Naval History and Heritage Command on its website.

John Kennedy served as a junior grade lieutenant in the Navy during World War Two, commanding the torpedo boat PT-109. When a Japanese destroyer rammed the PT-109 in 1943, Kennedy managed to save himself and rescue another wounded crew member. (Photo by © CORBIS/Corbis via Getty Images)

“Loaded with two twin .50 cal. M2 Browning machine guns, two 40 mm guns (fore and aft) and four single .30 and .50 cal. machine guns, the water craft had the power to destroy any obstacle that got in its way,” explains the Navy’s History and Heritage Command.

Fox News has reached out to the MTA with a request for comment on this story.

WWII US SUBMARINE WRECK DISCOVERED 75 YEARS AFTER IT SANK

In another project, the wreck of World War II submarine USS Grayback was discovered off Japan last year, 75 years after its sinking by a Japanese bomber.

Separately in 2019, the deepest sunken shipwreck ever discovered, a U.S. World War II destroyer, was found in the Philippine Sea.

The wreck was found resting at a depth of 20,406 feet by experts on the Research Vessel Petrel. Explorers used an undersea drone to locate the mysterious ship, believed to be the USS Johnston, a Fletcher-class destroyer sunk during the Battle off Samar, a key action in the Battle of Leyte Gulf in 1944.

Eerie footage captured by the drone shows the mangled wreckage of the ship lying on the seabed.