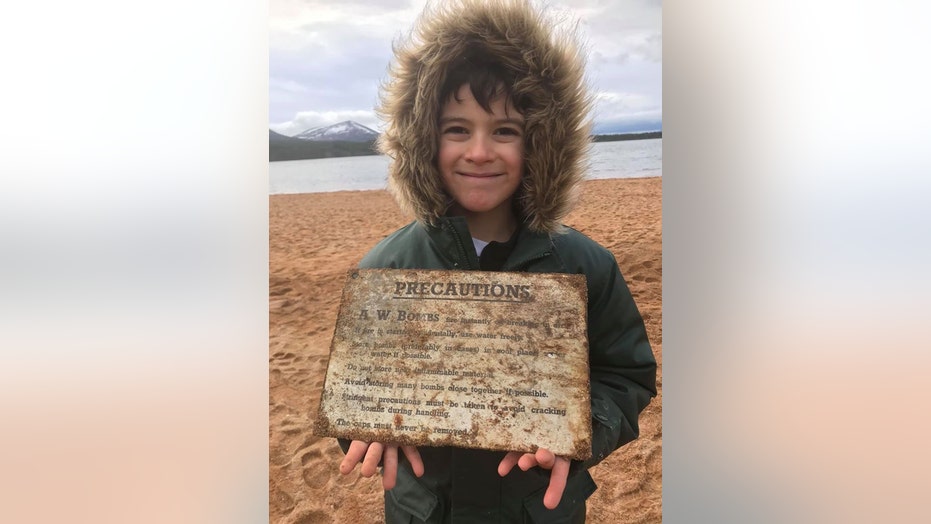 Now that's a Christmas gift for the ages.

A 7-year-old boy in Scotland discovered the remains of a World War II grenade on a beach in the Scottish Highlands, courtesy of the metal detector he got for Christmas, British news agency SWNS reports.

Patrick McAlindon made his discovery just 15 minutes after arriving on the beach at Loch Morlich to play with his new present. On vacation along with his parents, Ana and Andrew, older brother Daniel and younger sister Lana, Patrick said he was amazed by what he had found.

Seven-year-old Patrick McAlindon with a sign from a crate of incendiary bombs he found on a beach at Loch Morlich in the Scottish Highlands on Christmas Day. After just 15 minutes of scanning the beach at Loch Morlich Patrick was stunned when his new gadget showed an “off the scale” reading. (Credit: SWNS)

“The metal detector almost went off the scale," Patrick said in comments obtained by SWNS. “I was really shocked, I thought it was gold or something."

“We started digging, then two minutes later we found the sign," he added. “I was really surprised and shocked when I saw ‘bomb.' I was a bit scared at first because I thought there were grenades under there.”

In addition to the grenade remains, he found discarded crates and a bomb warning sign, believed to be where Allied Norwegian soldiers trained.

Bits of wood from the bomb crates, metal hinges and glass bottle caps from the bombs of incendiary bombs found on a beach at Loch Morlich. (Credit: SWNS)

Upon finding the historic items, the family called the police and were put in touch with bomb disposal experts. After they were told there was no risk to them, the McAlindon family kept sweeping the beach, even as the dig attracted hoards of onlookers.

Ana said that Patrick is looking forward to making more discoveries and is eager to tell his classmates at school what he found while on vacation.

Bits of wood from the bomb crates, metal hinges and glass bottle caps from the bombs of incendiary bombs found on a beach at Loch Morlich. (Credit: SWNS)

In November, three children in Germany fished World War II ammunition from a pond using a "strong magnet," according to local police.