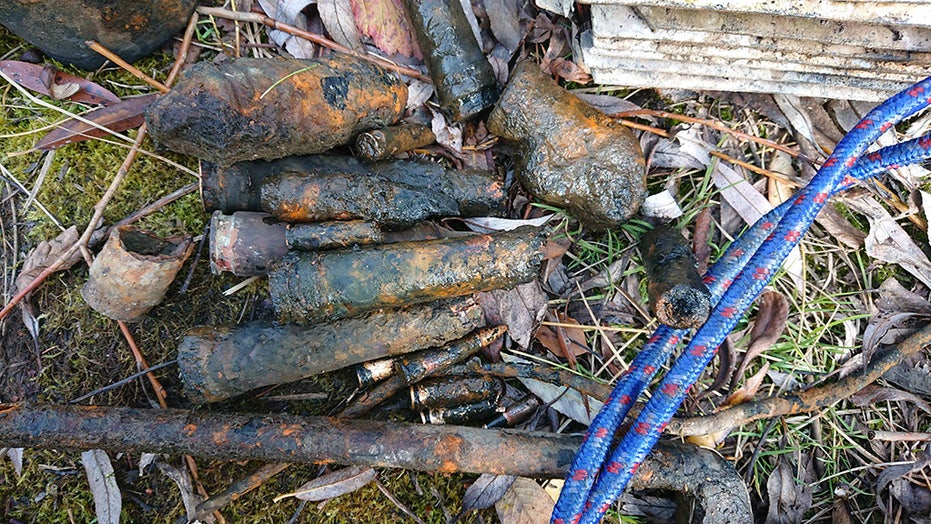 This was an unlikely catch of the day.

Three children in Germany fished ammunition from World War II out of a pond over the weekend after using a "strong magnet," according to local police.

Authorities in Thuringia said on Facebook the incident happened Saturday afternoon when the children were fishing from a pond near Wölfis.

When they discovered what was hanging at the end of their line, police said "they carefully discarded the ammunition and promptly informed" the authorities.

1,100-POUND US BOMB FROM WWII DEFUSED IN GERMANY AFTER MASS EVACUATION

The incident sparked a large emergency response, with police cordoning off the area as they took care of the proper disposal of the items.

No one was injured, but officials said it served as a reminder not to pursue such hobbies as collecting historical items.

"There is a very high risk of being injured or even killed when finding ammunition and ordnance," police said.

Authorities warn that the older munitions are, the more dangerous they could be. (National Police Inspectorate Gotha)

More than 70 years after the end of the War, unexploded bombs keep turning up in Germany. Disposing of them sometimes has entailed large-scale precautionary evacuations.

Earlier this year, officials in Frankfurt had to evacuate about 16,500 people after a 1,100-pound American bomb was discovered during construction work.

City officials evacuated about 17,000 people from the area before emergency workers defused the massive explosive.

The Thuringia police force said Monday that weapons and ammunition from World War II that are discovered should be considered life-threatening and that the longer the weapons are in the ground "the more dangerous they become."

Officials also stressed that the size and shape of the munitions have nothing to do with how dangerous they are.

"When locating munitions — do not touch and leave at the site!" police said. "Weapons are extremely sensitive to touch, shock or change in their position!"