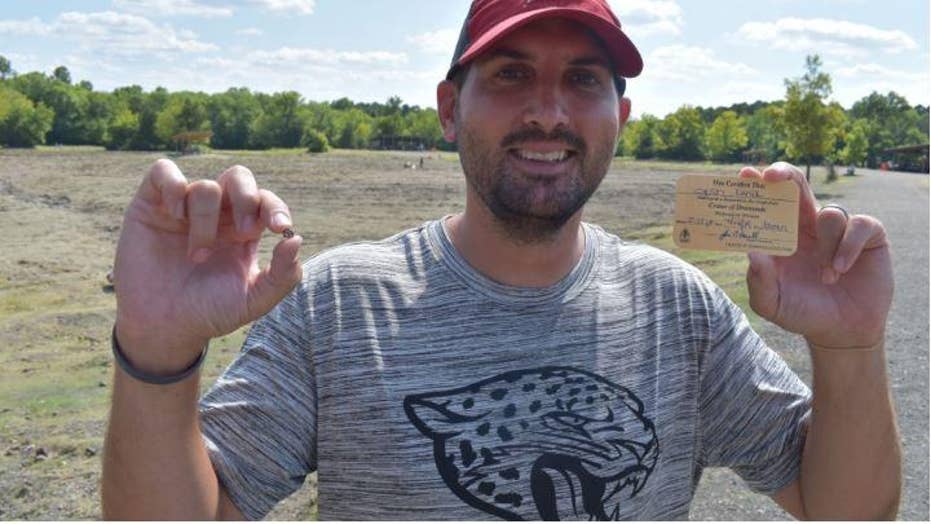 A school teacher from Nebraska, Josh Lanik, found the rock after digging for just two hours at the Arkansas state park.

A vacationing schoolteacher recently found a 2.12-carat brown diamond at the Crater of Diamonds State Park in Arkansas.

Josh Lanik, a 36-year-old teacher from Hebron, Neb., found the diamond after just two hours of searching on July 24, according to Arkansas State Parks.

The Crater of Diamonds State Park in Murfreesboro, Ark., lets visitors search for real diamonds in their original volcanic source. “Any rock or mineral you find is yours to keep,” the park explains on its website.

“We took the kids to look for amethyst on Canary Hill, and I was walking through an area where it looked like a lot of water had washed when I saw it,” Lanik explained, in a statement released by Arkansas State Parks. “It was blatantly obvious there was something different about it. I saw the shine, and when I picked it up and rolled it in my hand, I noticed there weren’t any sharp edges.“

After Lanik took his find to the park’s Diamond Discovery Center, staff confirmed that his gem was the largest found at the site this year. Some 296 diamonds have been registered at the park this year, weighing a total of 53.94 carats. Diamonds weighing at least one carat have accounted for 11 of the gems found.

Record-breaking rainfall likely played a part in Lanik’s stunning find. “About 14 inches of rain fell at the park on July 16. In the days after the rainfall, park staff registered numerous diamonds found right on the surface of the search area, including two weighing over one carat,” said Park Interpreter Waymon Cox in the statement. “Mr. Lanik’s gem is about the size of a jellybean and has a dark brown color, similar to brandy. It has a beautiful natural pear shape and smooth, curved facets that give the gem a metallic shine.”

Lanik said that he plans to keep the gem, for now, and has named his find the Lanik Family Diamond.

The largest diamond ever discovered in the United States was unearthed at the site in 1924 and weighed 40.23 carats. The gem was dubbed “Uncle Sam.”

More than 33,100 diamonds have been found by visitors to the park since Crater of Diamonds became an Arkansas state park in 1972.