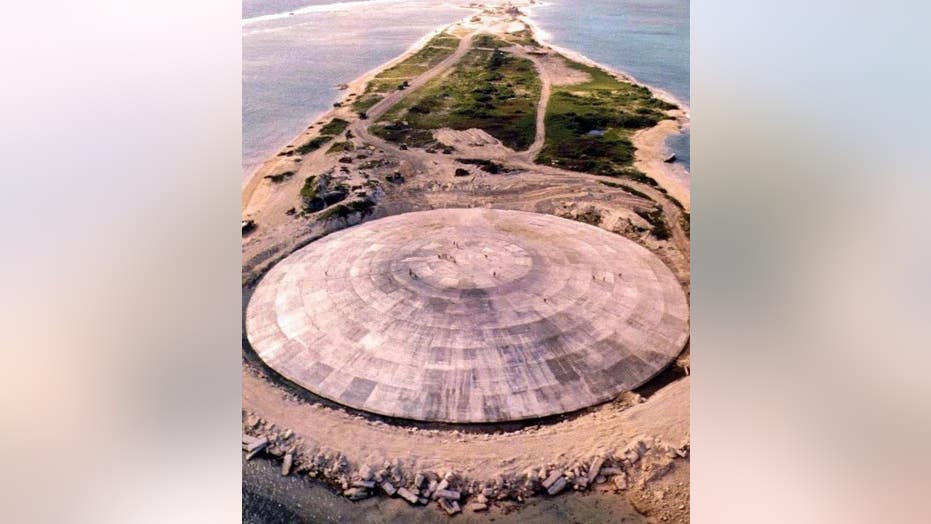 Radioactive waste from Cold War nuclear weapons tests could be leaking into the Pacific Ocean.

According to United Nations Secretary-General Antonio Guterres, a concrete dome that was built on Runit Island in the late 1970s to contain waste from massive atomic bomb tests conducted after World War II could be leaking toxic sludge into the sea.

"The Pacific was victimized in the past as we all know," Guterres said, according to AFP, referring to nuclear explosions carried out by the United States and France in the region.

ALLIGATOR CAPTURED IN PITTSBURGH PARK AFTER TRYING TO HIDE FROM OFFICERS

A huge concrete dome was built over a crater left by a nuclear blast on Runit Island. (EPA)

The island nation was where 67 American nuclear weapons tests were conducted, which included the 1954 "Bravo" hydrogen bomb, the most powerful ever detonated by the U.S. and about 1,000 times bigger than the A-bomb dropped on Hiroshima, Japan.

In the Marshall Islands, many residents were forced to leave their land and thousands of others were exposed to radioactive fallout.

"I've just been with the president of the Marshall Islands [Hilda Heine], who is very worried because there is a risk of leaking of radioactive materials that are contained in a kind of coffin in the area," Guterres, who is touring the South Pacific to raise awareness about climate change, told AFP.

Radioactive soil and ash from the blasts were put into the crater and capped with an 18-inch thick concrete dome that was seen as a temporary fix at the time.

The mushroom cloud from Castle Bravo, the most powerful nuclear device ever detonated by the United States. (U.S. Department of Energy)

Now, cracks have developed in the concrete and there are fears that it could break apart in the event of a tropical cyclone.

"A lot needs to be done in relation to the explosions that took place in French Polynesia and the Marshall Islands," the U.N. chief said. "This is in relation to the health consequences, the impact on communities and other aspects. Of course, there are questions of compensation and mechanisms to allow these impacts to be minimized."