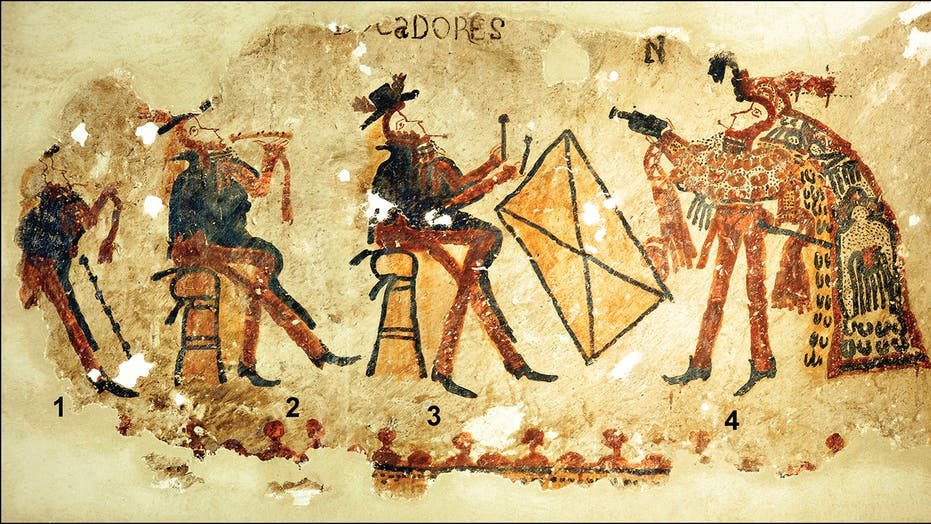 Stunning Maya wall paintings have been discovered during the renovation of a house in Guatemala.

Found on the walls of a house in Chajul, experts say that the paintings are from the colonial period between A.D. 1524 and 1821. The paintings, which were discovered in 2003 by the house’s owner, have been conserved by a team of experts.

“The priceless paintings may represent a revival of local culture as Spanish authority waned,” researchers explain in a statement emailed to Fox News, noting that they combine indigenous techniques and motifs of Spanish origin.

HUGE MAYA MONUMENT IN MEXICO IS THE LARGEST AND OLDEST EVER DISCOVERED, ARCHAEOLOGISTS REVEAL

The research is published in the journal Antiquity.

Part of the mural, featuring musicians dressed in European attire (three figures on the left) and a dancer in Maya dress (figure on the right) (credit: R. Słaboński/Antiquity)

Working with local Ixil Maya people researchers have gained insight into the paintings, which may depict ceremonial dances that recreate historical events. Specifically, the paintings may depict the Baile de la Conquista (Dance of the Conquest) and the Baile de la Reconquista (Dance of the Reconquest). “The former recollects the conquest of the Maya by the Spanish, whilst the latter tells the story of the Reconquista, a key part of Spanish Medieval history,” the researchers explained in the statement.

“Some of these dances were created by the Spanish to insert their ideals into local traditions, helping legitimatise their conquest and promote conversion to Christianity,” the researchers added. “However, the Dance of the Conquest was eventually reinterpreted as a tale of local history and repression.”

Many of the dances were banned in that region of Guatemala, which means that the paintings may represent a “lost” dance. The mural, which extends across three walls, features dancers in European attire and also dancers in Maya dress.

Experts from the Jagiellonian University in Poland, Hamburg University and the University of Valencia participated in the project, which is backed by the National Science Centre of the Republic of Poland.

The find is the latest in a series of fascinating Maya discoveries. Earlier this year, for example, a huge Maya monument in Mexico was revealed as the largest and oldest ever discovered.

In another project, the capital of a long-lost Maya kingdom was recently discovered in the backyard of a cattle rancher in Mexico.

In 2018, an ancient mask depicting a seventh-century Maya king was discovered in southern Mexico.

LiveScience reported that hundreds of Maya artifacts that may have been used in ritual animal sacrifices were also discovered at the bottom of a Guatemalan lake.

From its heart in what is now Guatemala, the Maya empire reached the peak of its power in the sixth century, according to History.com, although most of the civilization’s cities were abandoned around 900 A.D.