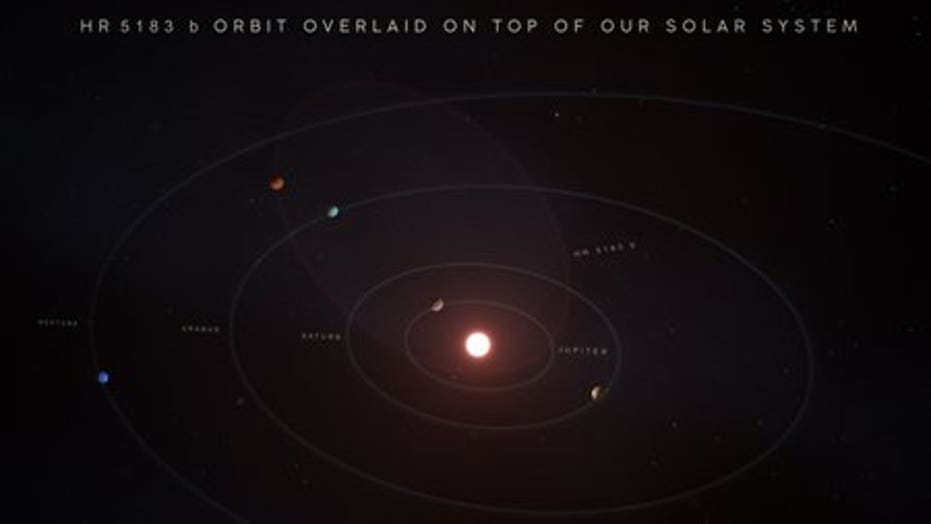 Astronomers have spotted a giant exoplanet that they say is unlike any other.

Planet HR 5183 b has three times the mass of Jupiter and travels on an incredibly long, egg-shaped path around its star, according to Caltech, which led the research. The planet takes 45 to 100 years to complete its orbit, Caltech noted in a statement.

"If this planet were somehow placed into our own solar system, it would swing from within our asteroid belt to out beyond Neptune," it added.

Scientists’ study of the newly discovered planet will be published in The Astronomical Journal.

"This planet is unlike the planets in our solar system, but more than that, it is unlike any other exoplanets we have discovered so far," said Sarah Blunt, a Caltech graduate student and first author on the study, in the statement. "Other planets detected far away from their stars tend to have very low eccentricities, meaning that their orbits are more circular. The fact that this planet has such a high eccentricity speaks to some difference in the way that it either formed or evolved relative to the other planets."

An illustration comparing the "eccentric" orbit of HR 5183 b to the more circular orbits of the planets in our own solar system. (Credit: W. M. Keck Observatory/Adam Makarenko)

While the planet’s star, HR 5183, had been studied since the '90s, HR 5183 b’s epic journey meant that experts lacked full orbit information.

"This planet spends most of its time loitering in the outer part of its star’s planetary system in this highly eccentric orbit, then it starts to accelerate in and does a slingshot around its star,"  said Caltech Professor of Astronomy Andrew Howard, who leads the California Planet Search, in the statement. "We detected this slingshot motion. We saw the planet come in and now it's on its way out. That creates such a distinctive signature that we can be sure that this is a real planet, even though we haven't seen a complete orbit."

Experts believe that the planet’s strange orbit is likely because it nudged another similar-size planet out of the solar system.

"This newfound planet basically would have come in like a wrecking ball," said Howard, in the statement. "Knocking anything in its way out of the system."
ALIEN LIFE LOOMS? NEWLY DISCOVERED EXOPLANET MAY BE BEST CANDIDATE, EXPERTS SAY

Experts from the Harvard Center for Astrophysics used NASA's Transiting Exoplanet Satellite Survey (TESS) telescope to spot planet LTT 1445 A b and its three stars.

In another project, data from NASA’s Spitzer Space Telescope has given scientists a first glimpse into conditions on the surface of a rocky exoplanet beyond the solar system.