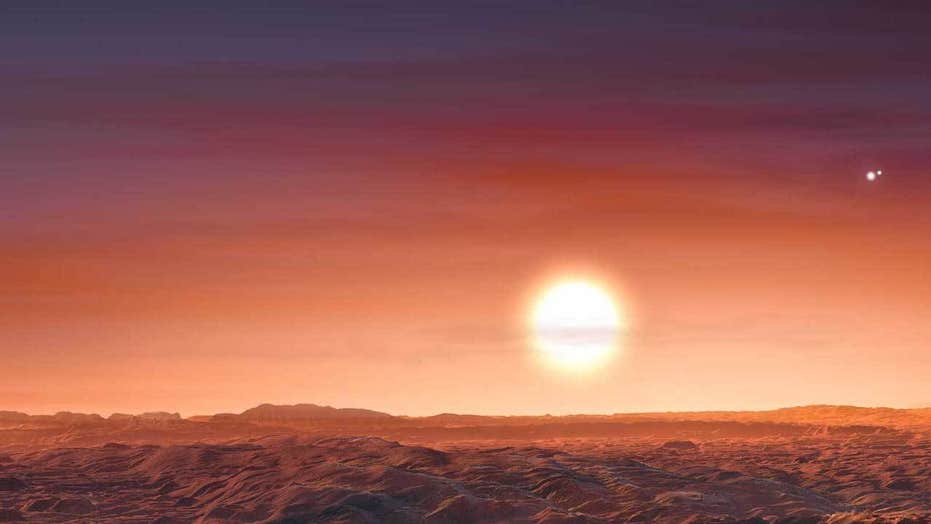 A distant rocky exoplanet has gone one better than Tatooine, Luke Skywalker’s home planet on “Star Wars,” which is famously depicted as having two suns in its sky.

Scientists from the Harvard Center for Astrophysics used NASA's Transiting Exoplanet Satellite Survey (TESS) telescope to spot planet LTT 1445 A b and its three stars.

“While the planet itself remains in what is probably a stable orbit around its star, that star also orbits, at greater distance, two sibling stars that are locked in close orbit around each other,” explained NASA, in a statement.

LTT 1445 A b is about 22 light-years from Earth. A light-year measures distance in space and equals 6 trillion miles.

Artist's impression of Proxima b, which, like newly discovered exoplanet LTT 1445 A b, also has three stars in its sky. (ESO/M. Kornmesser)

“LTT 1445 A b takes only five days to go once around its star – a ‘year’ on this world,” said NASA. “Its scorchingly close orbit helps explain why its surface basks in temperatures on the order of 320 degrees Fahrenheit (160 Celsius) – comparable to a preheated oven.”

This is not the first time that a planet with more than one star has been discovered. NASA notes that our nearest exoplanet neighbor, Proxima b, also has three stars in its sky. Proxima b orbits Proxima Centauri located 4.25 light-years from Earth, which in turn orbits Alpha Centauri A and B.

In 2016, experts from NASA’s Goddard Space Flight Center and San Diego University used the Kepler Space Telescope to spot Kepler-1647 b, a planet with two suns in the Cygnus Constellation.