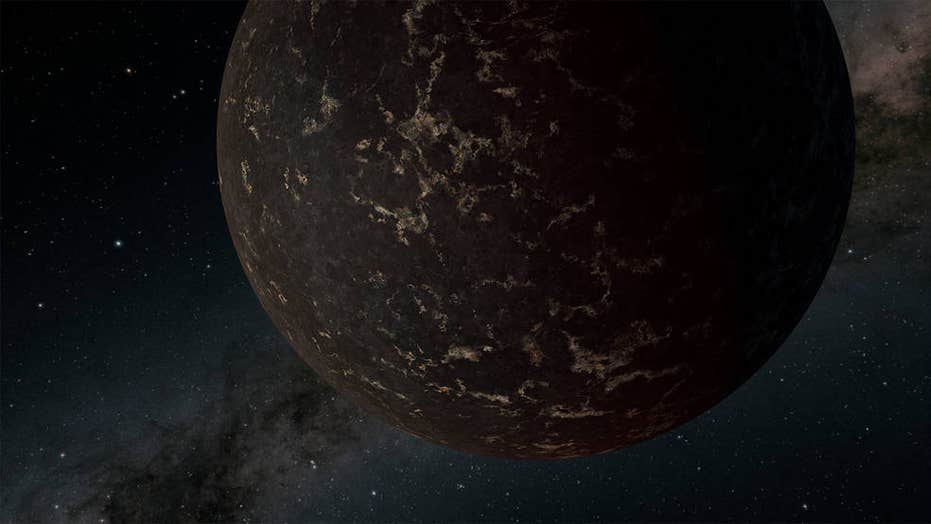 Data from NASA’s Spitzer Space Telescope has given scientists a first glimpse into conditions on the surface of a rocky exoplanet beyond the solar system.

Planet LHS 3844b is located 48.6 light-years from Earth and has a radius 1.3 times that of Earth, according to NASA. The exoplanet, which is orbiting a small star called an M dwarf, was first spotted by NASA’s Transiting Exoplanet Satellite Survey (TESS) in 2018.

A light-year measures distance in space and equals 6 trillion miles.

New research indicates that the mysterious planet’s surface may resemble Earth’s Moon or Mercury, NASA said in a statement released Monday. “The planet likely has little to no atmosphere and could be covered in the same cooled volcanic material found in the dark areas of the Moon's surface, called mare,” it explained.

The infrared Spitzer Space Telescope was able to detect light from the surface of LHS 3844b. “The planet makes one full revolution around its parent star in just 11 hours,” NASA said in the statement. “With such a tight orbit, LHS 3844b is most likely ‘tidally locked,’ which is when one side of a planet permanently faces the star. The star-facing side, or dayside, is about 1,410 degrees Fahrenheit (770 degrees Celsius).”

The research study was published in the journal Nature.

"We've got lots of theories about how planetary atmospheres fare around M dwarfs, but we haven't been able to study them empirically," said Laura Kreidberg, the study’s lead author and a researcher at the Harvard and Smithsonian Center for Astrophysics in Cambridge, Mass., in the statement. "Now, with LHS 3844b, we have a terrestrial planet outside our solar system where for the first time we can determine observationally that an atmosphere is not present."

TESS discovered the planet via what is known as the “transit method,” which uses the dimming of a parent star to identify the transit of the objects orbiting it.

The Spitzer Space Telescope studied the planet’s surface reflectiveness. “LHS 3844b appears to be the smallest planet for which scientists have used the light coming from its surface to learn about its atmosphere (or lack thereof),” said NASA, in its statement.

The planet is believed to be covered in basalt, or volcanic rock.

In 2017, NASA announced the discovery of seven Earth-sized planets orbiting the star TRAPPIST-1, nearly 40 light-years away from Earth.

In a separate project, a black hole swallowing a neutron star has likely been detected for the first time, according to scientists.