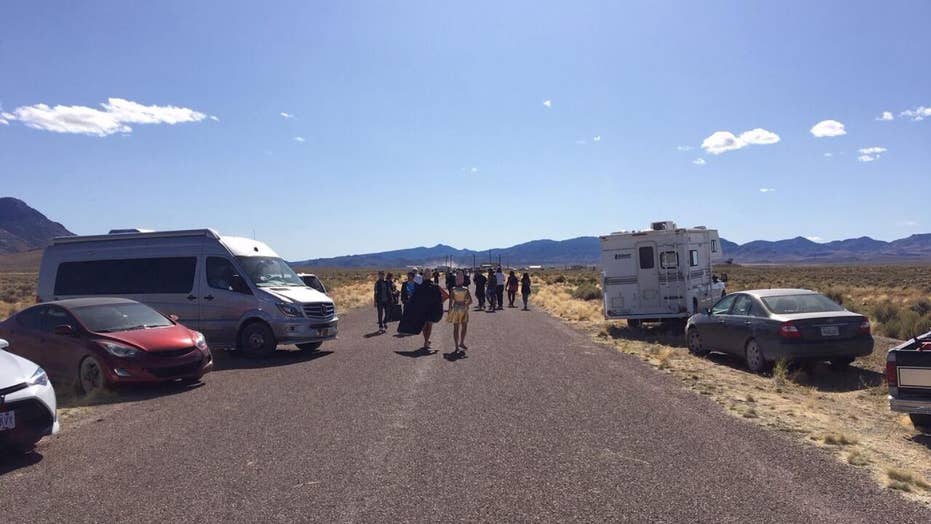 ‘Storm Area 51’ has alien ‘believers’ mostly standing near the gate

The ‘storm Area 51’ alien ‘believers’ are mostly standing near the gate and looking to the skies.

They came. They "stormed." And now, someone has to pay the bill.

Two alien themed-music festivals in Nevada spawned from the "Storm Area 51" frenzy wrapped up by Sunday after thousands camped out and partied in the desert about 140 miles north of Las Vegas, before making the trek out of Lincoln County.

The "Storm Area 51" Facebook event went viral in July as people pledged to crash the secret military base in an attempt to "see them aliens," with more than 2 million Facebook users saying they were going. But the actual numbers of those who actually turned out for the festivals and to see the infamous "back entrance" to Area 51 was actually much more manageable.

Lincoln County Emergency Manager Eric Holt told FOX5 on Monday that at its peak on Friday, about 3,000 people were camping at Alienstock in Rachel, Nev. in addition to hundreds that drove out into the area along the "Extraterrestrial Highway' to visit one of the entrances to Area 51.

Holt told FOX5 that Lincoln County now is left with a $200,000 bill to cover the cost of bringing in about 300 additional officers and supplies to support their deployment all weekend.

Authorities had staged several incident command areas with trailers and supplies in case massive crowds arrived and overwhelmed the water, electricity, food, fuel, internet and telephone service in the county that covers an area that's roughly the size of Massachusetts. Local officials had prepared for up to 30,000 to arrive.

Emergency personnel can be seen staging at an area outside Rachel, Nev. on Route 375, also known as the "Extraterrestrial Highway" on Sept. 18, 2019. (Travis Fedschun/Fox News)

County commissioners are planning to take money from the "Land Fund Act" to pay for posts. In speaking with FOX5, Holt added he is sending a letter to the state to try to get up to 50 percent of the money reimbursed.

But another Lincoln County commissioner, rancher Varlin Higbee, told the Associated Press the commission may sue to recoup the costs after signing an emergency declaration earlier this month.

"Think about it," Higbee said. "Here's an illegal event, supporting an illegal activity — storming the gate. We're not sure what we're going to do at this point."

Area 51 raiders have a pleasant exchange with military and police

Jonathan Hunt talks with elected officials and those gathered to 'storm Area 51.'

While Lincoln County permitted festivals in Rachel and Hiko, neighboring Nye County did not allow festivals or large gatherings. However, the county still operated under a declaration of emergency since Aug. 29 to mobilize resources in anticipation of any major incidents.

Other than 50 people who approached the Nevada National Security Site gates in Amargosa Valley and then Mercury early Friday morning, no major incidents took place over the weekend. Officials said that "everyone remained peaceful" and no arrests were made or citations issued through the entire weekend.

The scene Friday afternoon outside the back gate to Area 51 in Rachel, Nev. (Travis Fedschun/Fox News)

"I am extremely proud of our volunteer and career forces who stepped up to ensure the safety and protection of our communities," Lewis said in a statement posted to Facebook. "Nye Administrative and staff, including the Board of County Commission Chairman John Koenig, were fully committed to our successes and spent countless hours in the Emergency Operations Center."

AREA 51: TOP CONSPIRACY THEORIES ABOUT THE SECRET MILITARY BASE

Officials said the full cost of the county's preparedness efforts for the rumored influx of people will be made public over the next few weeks, but includes staff time from the Nye County Emergency Management, sheriff's office, county Administration, including the county manager's office and finance, and first responders throughout rural Nye County.

Crowds gathering outside the back gate to Area 51 in Rachel, Nev. (Travis Fedschun/Fox News)

"Other costs include the acquisition and mobilization of resources, renting of hotel rooms for state and federal personnel to assist the county, as well as other expenses," officials said.

'I HOPE THIS BECOMES A YEARLY THING'

While the official "storming" didn't draw a massive crowd and one event had activities canceled due to low attendance, those who still turned out and some business owners are hopeful there would be some repeat in the future.

In Rachel, site of "Alienstock," where around 3,000 festival and campers partook in activities such as ax-throwing and alien meditation, many milling around the crowd told Fox News on Saturday they were surprised by how many people showed up.

"I hope that this becomes a yearly thing," Jade Gore told Fox News. "Everyone's getting to know each other and made friends. I hope this goes on."

Campers continued to wander around in Rachel, Nev. where "Alienstock" was taking place. (Travis Fedschun/Fox News)

James Barker said "Alienstock' was "a lot more exciting" than he expected, and that he originally thought he was just going to pull up his truck on a hill with some binoculars to check out the mysterious site.

"This is better than I had imagined," he told Fox News. "Everybody, we all just came here and made some friends. I hope this is a yearly thing from now on."

Others echoed similar sentiments. Natalie Medina, the owner of E.T. Fresh Jerky, told Fox News she saw traffic pick up as the event approached in September during a time period that typically sees a slowdown in business after the busy summer reason.

"I would love to see this every year," Medina told Fox News. "I think that this area could use a lot of growth."

Medina said a possible annual event would help businesses in the area. For Medina's company, which has been around since 2011, the opportunity to grow into something larger would be welcomed.

"Nevada is a lot of things, mostly Las Vegas is what it's known for, obviously, but I feel as though you can get a lot of things from outside of Las Vegas. There's a lot to see and do in the area," she said. "I just think that if its an annual thing, I think it would grow and a lot of people would take advantage of actually getting out of Vegas and being able to do something."

Little A'Le'Inn owner-turned-"Alienstock" festival host Connie West told FOX5 on Monday the festival was "fabulous, absolutely fabulous," and that she would still be open to hosting another event on her property next year.

West, who is down about $40,000 in costs associated with the event, told the AP that while no one uncovered any extraterrestrials or UFOs over the course of the weekend, they uncovered something more important.

"We found peace. And friendship," she told the AP on Sunday.