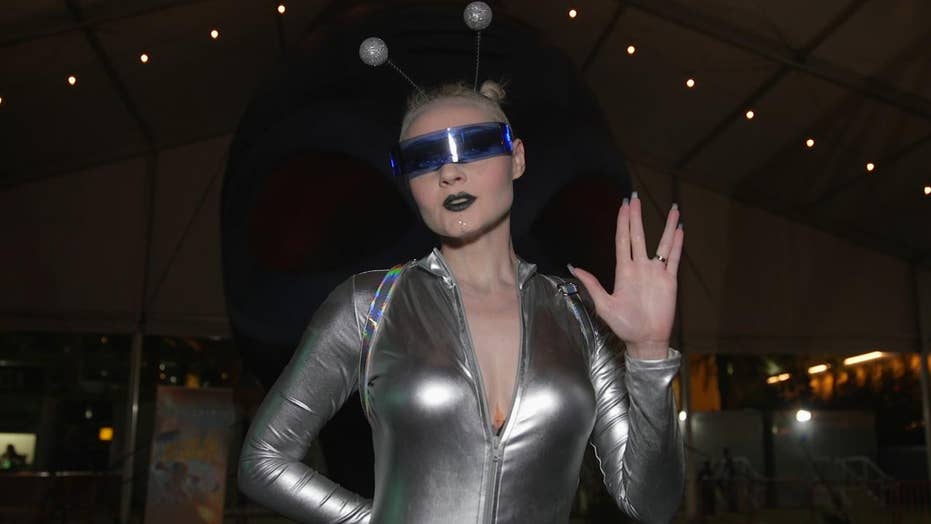 Visitors from around the country are trekking to the Alien Research Center in Hiko, Nevada, where the ‘Storm Area 51 Basecamp’ will take place Friday and Saturday. Fox News spoke to some of the ‘alien believers’ to find out if they really plan to raid Area 51 this weekend.

LAS VEGAS – From the bright lights and bustling streets of downtown Las Vegas' famous Fremont Street to the dusty and dry remote Nevada high-desert, "Storm Area 51" hype has brought out the true believers in-force who are certain we are not alone in the universe.

At the Alien Research Center in Hiko, Nev., where the "Storm Area 51 Basecamp" will take place Friday and Saturday, a steady stream of people perused alien-inspired gifts in the store such as magnets, T-shirts, and Christmas ornaments, with many decked out to impress visitors from another world.

Kelly Bourbon from Las Vegas and Angel (who did not provide her last name), from Wichita, Kan., sported similar-looking T-shirts that read "Mars Needs Women" and "Beam Us Up" as they explained they've followed "anything and everything alien" ever since they were little and heard stories about UFOs from their fathers who worked at the Wright-Patterson Air Force Base in Ohio.

Kelly Bourbon from Las Vegas and Angel, from Wichita, Kan. said they are into "everything and anything alien." (Fox News)

"We figure Mars needs women, so we're here if they want to beam us up," Angel said.

'STORM AREA 51': HAVE YOU INTEREST IN SEEING THE MYSTERIOUS SITE'S ENTRANCE? TAKE A PEEK

Area 51 is popularly known as the site of rumored government studies of extraterrestrials. The "Storm Area 51" Facebook event went viral in July as people pledged to crash the secret military base in an attempt to "see them aliens." More than 2 million Facebook users have now said they are going, with over 1.4 million replying they were interested.

Two festivals have since popped up since the event went viral, one in Rachel, and the other in Hiko. Lincoln County Sheriff Kerry Lee told reporters on Thursday afternoon at a briefing that perhaps 1,500 people had been drawn to the two tiny desert towns, with more than 150 making the trek on dirt roads to visit the two gates of the Area 51 U.S. Air Force installation.

The Air Force has issued stern warnings for people not to try to enter the Nevada Test and Training Range, where Area 51 is located.

"It's public land," the sheriff said. "They're allowed to go to the gate, as long as they don't cross the boundary."

Brandon Ruth, who is visiting Nevada for the first time during this weekend of hype, said that the idea of "storming" the military site was one of the "silliest ideas ever."

Ruth, who served in the Army for around just over six years, added that anyone who tries to raid a government base will "will go straight to prison and you will not collect $200 and/or you will be shot and killed, unfortunately."

At the Storm Area 51 Basecamp, organizers are looking to promote a microphone for the movement to expose UFO secrecy instead of any "storming." Guy Malone told Fox News he hopes this weekend's event is a success that then turns into an annual tradition for those who believe in life outside of Earth.

"It's a community of believers where people can have a ton of fun if they don't take it too seriously and turn it into their religious beliefs," Malone said.

For Ben Gary Winthorp and Michael Fortner, there were mixed opinions about what really lurks in the secret Nevada site.

The pair, who frequently go to festivals — including Winthorp who was still sporting a neck brace after an injury at a recent festival — both believe that there's someone out there "crazy enough to jump into Area 51."

"This is the most millennial thing to happen," Fortner told Fox News.

Alienstock: From Vegas to global?

In downtown Las Vegas, the relocated Alienstock festival from the California man who created the initial Facebook event featured an assortment of food and cocktail stands, carnival rides, and special cans from event presenter Bud Light featuring a green alien in the background.

The Bud Light Area 51 Celebration, which was free to attend, had Matty Roberts spend two hours signing everything from T-shirts to people's arms. Roberts, who thanked the crowd for coming to the 'f----n" show,' also shared what lies in store for the hype his event created.

"Alienstock's already going on tour, we already have like a bunch of nightclubs across the United States that are wanting us to take Alienstock to their venues and they want me to host the party," he told FOX5. "So, it's going global and it's going to be amazing."

Some who were at the downtown Las Vegas event said they still going to head to the other festivals after.

"I figured it would just be a bunch of people drinking in the desert, I knew I was right," Arielle Aquinas told Fox News, adding she's a big sci-fi fan and believer in aliens.

"The proof is there," she said.

While neighboring Lincoln County has planned events in Rachel and Hiko, Nye County has not permitted any festivals or large gatherings.

As of Thursday, that appears to have kept things quiet as officials said that the Nye County Department of Emergency Management and the Nye County Sheriff’s Office is "experiencing low activity" regarding people gathering within the area in support of the possible Storm Area 51 events.

"Traffic levels on U.S. Highway 95 through Amargosa Valley and Beatty continue to be slightly elevated but flowing smoothly through those communities," officials said in a news release.

Dutch nationals who were trespassing at area 51 were sent to jail for 3 days. The pair, who pled guilty, had to pay a hefty fine and forfeit all the electrical equipment they had on them.

Sharon Wehrly, the sheriff in adjacent Nye County, home to the Area 51 Alien Center, said messages discouraging Earthlings from trying to find extraterrestrials in Amargosa Valley appeared to work. She reported no arrests or incidents Thursday.

Last week, deputies arrested two Dutch tourists attracted by "Storm Area 51." The men pleaded guilty to trespassing at a secure U.S. site nowhere near Area 51 and were sentenced to three days in jail after promising to pay nearly $2,300 each in fines.