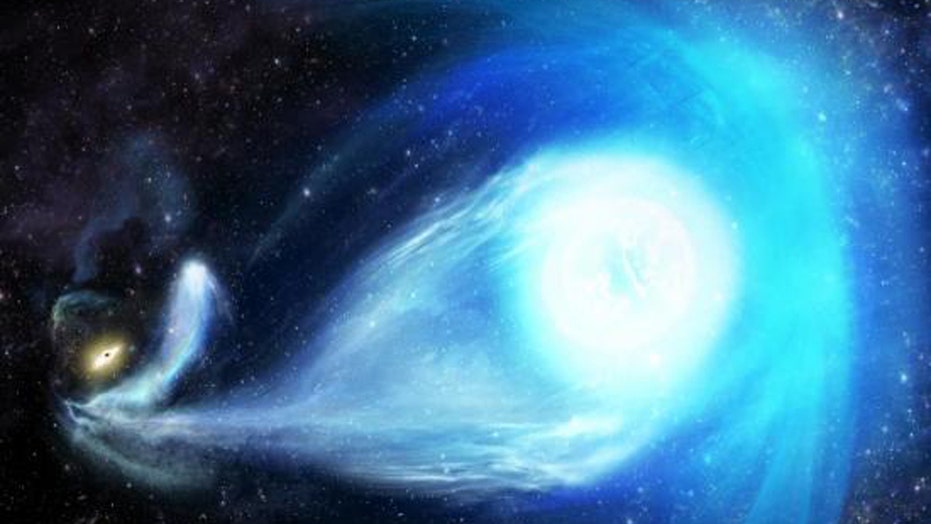 Approximately 5 million years ago, a star got too close to the "mind-boggling" black hole at the center of the Milky Way galaxy and was "ejected," a new study has found.

The star, known as S5-HVS1, ventured too close to the black hole and when it did, it was hurtled "at the blistering speed of 6 million kilometers per hour." When astronomers discovered it, it was found to be moving "nearly 10 times faster than most of the stars in the galaxy."

An artist’s concept of the ultrafast star S5-HSV1, which was ejected from the Milky Way by the supermassive black hole at the galaxy’s center. (Credit: James Josephides, courtesy of Swinburne Astronomy Productions)

PLANET 9 MAY NOT BE A PLANET AT ALL, BUT RATHER A 'PRIMORDIAL BLACK HOLE,' SHOCKING STUDY SUGGESTS

“The velocity of the discovered star is so high that it will inevitably leave the galaxy and never return,” one of the study's co-authors, Douglas Boubert, said in a statement.

The study's lead author, Sergey Kospov, said the discovery was "super exciting," as astronomers have long suspected that black holes are able to eject stars, but they had never seen it before.

“We think the black hole ejected the star with a speed of thousands of kilometers per second about 5 million years ago," Kospov added in the statement. "This ejection happened at the time when humanity’s ancestors were just learning to walk on two feet.”

The researchers have also posted a video to YouTube demonstrating how the star likely was ejected.

“Seeing this star is really amazing," said study co-author Ting Li in the statement, adding, “as we know it must have formed in the Galactic Center, a place very different to our local environment. It is a visitor from a strange land.”

The research has been published in the scientific journal Monthly Notices of the Royal Astronomical Society.

In October 2018, astronomers observed the supermassive black hole at the center of the Milky Way, known as Sagittarius A*, pulling gas blobs into its vortex at 30 percent of the speed of light. It is believed that Sagittarius A* has a mass that's more than 4 million times the mass of our Sun and resides approximately 25,000 light-years from Earth.

In May 2019, astronomers observed the sudden brightening of Sagittarius A*, suggesting it may have come in contact with another celestial object.